Task Force Hawk was a U.S. military unit constructed and deployed by General Wesley Clark to provide additional support to NATO's Operation Allied Force against the Yugoslavian government during the 1999 unrest in the Serbian province of Kosovo. The task force was to operate from the March 1999 until June 1999 when Slobodan Milošević withdrew the Yugoslavian Army from Kosovo.

Task Force Hawk, which never fired a round, has been hailed as both one of the largest blunders and largest successes by the U.S. military in recent years. This action has been reviewed and analyzed from every angle to determine what went right and what went wrong.

Planning for Task Force Hawk did not start until 20 March 1999 in Grafenwöhr, Germany; even though, the planning for Operation Allied Force had begun in the winter of 1998. General Clark and Admiral James O. Ellis, while at the Warfighter Exercise, discussed how to utilize the Apaches to augment the Air Force assets poised to strike in four days. [1] The Army's planners would be strapped for time to put together a plan to deploy a mission that had never been employed by an AH-64 Apache unit. [2] Instead of supporting ground troops the Apaches would be supporting Air Force missions. [3] General Clark's vision for the unit was to destroy the Yugoslavian units stationed in Kosovo supporting the Serbian police force. The Yugoslavian units were not formed in the company or battalion sized formations but rather spread out through the countryside. This made acquiring the targets and relaying the information to bomber units who couldn't spot them easily. It was projected that the Apache units would be able to identify and eliminate these targets more efficiently, due to their effectiveness in the first Gulf War. The Apaches would be supported by MLRS units conducting SEAD missions. General Clark's hope was that by eliminating a large enough portion of the Serbian forces would force Yugoslavian government to end the conflict. General Clark would face opposition to this opinion from several members of the Joint Chiefs of Staff.

By 22 March 1999, the planners would be finished with the initial plans for operation. These plans projected that the forces would be deployed to Macedonia, but the Macedonian government refused to allow offensive NATO operations to be launched from their country. "Army planners in Germany learned the mission would probably be cancelled on the Friday before Easter. [2] " Many soldiers would be given their first day off in weeks due to the Warfighter Exercise, hasty redeployment from Grafenwöhr, and preparations for deployment on Task Force Hawk; however, on 3 April, General Clark would decide to deploy the task force. It was announced on 4 April 1999 by the Department of Defense that Task Force Hawk would be deployed to Albania to assist in Operation Allied Force. [4] The original size of the task force was estimated at 2000 [5] but had to be increased due to the lack of force protection that was present in Albania.

Many units would begin the movement to Ramstein Air Base in Ramstein-Miesenbach, Germany, the main departure point as many of the units were part of V Corps. The airlift was directed by the U.S. Air Force's Air Mobility Operations Control Center (AMOCC) at the Ramstein Air Base, who was also coordinating the relief effect flights to Rinas. The Air Force would utilize the C-17 Globemaster III instead of C-5 Galaxy to deploy the Task Force to Tirana's Rinas Mother Teresa Airport airfield due to the runway length, taxiway, and ramp requirements. [6] [7] The short runway length would not be the only challenge for the deployment at Rinas. Operation Shining Hope was also utilizing the airfield to spearhead the humanitarian effects for the refugees of the war. The limited number of runways would only allow 20 sorties to be flown in the base per day. [2] It would take 200 sorties to deploy full complement of equipment. Despite this being the first time that the United States Transportation Command "gave a theater tactical control of a significant number of strategic airlift aircraft for a specific deployment, [3] General Montegomery C. Meigs later called one of the most successful airlift operations in history. [7] "

The Apaches self deployed from Illesheim, Germany in support of Task Force Hawk. The route taken was dictated by the fact that Austria and Switzerland would not allow use of their airspace due to the aircraft deploying to an armed conflict. The aircraft had to circumnavigate those two countries by first flying west into France around the western end of the Alps. From the southeast corner of France the flight turned south towards the Mediterranean Sea to follow the coast into northwest Italy where the aircraft and crews were made to wait for several days until the assembly area at Tirana airport was prepared for their arrival. (The ground was very soft and became quite muddy when driven over by army vehicles. The assembly area was not on a hard surface, positioned immediately west of the runway in the grass. The aircraft would have sunk up to their bellys if perforated steel planking had not been laid down. A mile long wood sidewalk had to be constructed to allow the flight and maintenance crews to walk from the assembly area to the aircraft parking area without sinking in the mud.)

Once the assembly area was built up enough to support the aircraft, the crews were given the go-ahead to continue south, down and across the Italian peninsula to the Brindisi airport where the aircraft were armed, and provisions made for the crews, for the 90-nautical-mile (170 km) flight over the open water of the Adriatic sea to Tirana.

Soldiers from the Task Force were also tasked with providing base security, establishing two Forward Operating Bases. The exact function of these FOB's are not quite known other by the military personnel stationed on them. 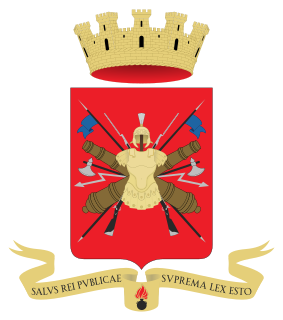 The Italian Army is the land-based component of the Italian Armed Forces of the Italian Republic. The army's history dates back to the Italian unification in the 1850s and 1860s. The army fought in colonial engagements in China, Libya, Northern Italy against the Austro-Hungarian Empire during World War I, Abyssinia before World War II and in World War II in Albania, Balkans, North Africa, the Soviet Union, and Italy itself. During the Cold War, the army prepared itself to defend against a Warsaw Pact invasion from the east. Since the end of the Cold War, the army has seen extensive peacekeeping service and combat in Afghanistan and Iraq. Its best-known combat vehicles are the Dardo infantry fighting vehicle, the Centauro tank destroyer and the Ariete tank and among its aircraft the Mangusta attack helicopter, recently deployed in UN missions. The headquarters of the Army General Staff are located in Rome opposite the Quirinal Palace, where the president of Italy resides. The army is an all-volunteer force of active-duty personnel.

Marine Air-Ground Task Force is a term used by the United States Marine Corps to describe the principal organization for all missions across the range of military operations. MAGTFs are a balanced air-ground, combined arms task organization of Marine Corps forces under a single commander that is structured to accomplish a specific mission. The MAGTF was formalized by the publishing of Marine Corps Order 3120.3 in December 1963 "The Marine Corps in the National Defense, MCDP 1-0". It stated: 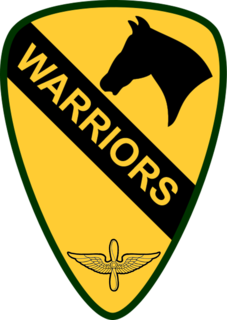 The Combat Aviation Brigade, 1st Cavalry Division is a divisional aviation brigade of the United States Army. It was activated on 16 September 1984.

The 1st Battalion, 227th Aviation Regiment is an attack helicopter battalion of the Combat Aviation Brigade, 1st Cavalry Division. The battalion is an AH-64 Apache battalion based at Fort Hood, Texas.

The 135th Aviation Regiment is an Aviation Branch regiment of the United States Army, first formed in August 1985.

Task Force Mustang is the deployment unit name for the Combat Aviation Brigade (CAB), 36th Infantry Division, Texas Army National Guard. The CAB completed a tour of duty in support of Operation Iraqi Freedom in the fall of 2007 when it was relieved by the 12th Combat Aviation Brigade, a similarly constituted regular army unit. 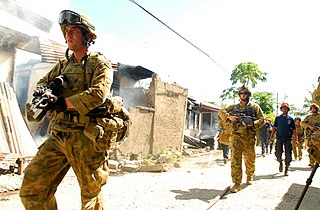 Operation Astute was an Australian-led military deployment to East Timor to quell unrest and return stability in the 2006 East Timor crisis. It was headed by Brigadier Bill Sowry, and commenced on 25 May 2006 under the command of Brigadier Michael Slater. The operation was established at the request of East Timor's government, and continued under an understanding reached between Australia, East Timor, and the United Nations, with the United Nations Integrated Mission in East Timor supporting and helping to develop East Timor's police force. Other countries deploying soldiers to East Timor include Malaysia, New Zealand and East Timor's former colonial power Portugal, operating under independent command. 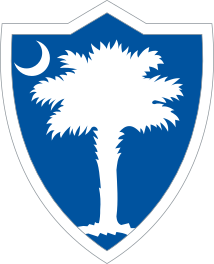 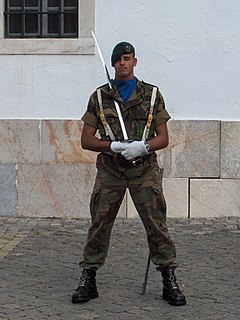 The Brigada de Reacção Rápida is a unit of the Portuguese Army which was known as BAI - Brigada Aerotransportada Independente until 2006. Its different units are highly trained Paratroopers, Commandos and Special Operations Troops capable of responding to threats in any part of continental Portugal or any other Portuguese overseas territory with quick deployment by air, sea or land. This brigade is the most requested by the Portuguese Government to fulfill international assignments due to its experience and multi-role capability. 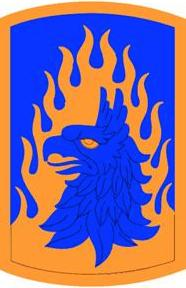 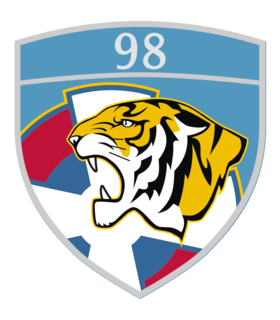 The 98th Air Base is an air base of the Serbian Air Force and Air Defense. It is the permanent base for Serbia's attack aviation and anti-tank helicopters.

In 2009, the United States and NATO International Security Assistance Force (ISAF) coalition, along with Afghan National Army forces, continued military operations against the Taliban in Afghanistan. 2009 marks the eighth year of the War in Afghanistan, which began late in 2001. And 75th ranger regiment is also in Afghanistan as of 2018 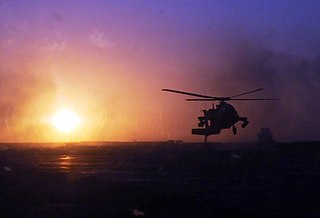 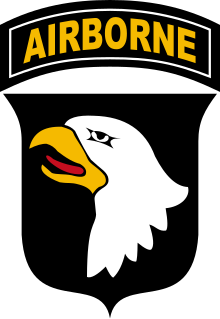 The Combat Aviation Brigade, 101st Airborne Division is a combat aviation brigade of the United States Army. It was first organized in July 1968 as an aviation group and stands as the most decorated aviation unit in the United States Army. It was redesignated an aviation brigade in 1986. It has served in almost every single military operation since the Vietnam War. In support of the Global War on Terror, the CAB has distinguished itself as the military's premiere combat aviation unit during its two deployments to Iraq and five deployments to Afghanistan. The brigade has flown hundreds of thousands of hours during these combat tours, transporting millions of troops around the battlefield and providing close air support/aerial reconnaissance. The 101st broke its own record for longest air assault in history during the invasion of Iraq in 2003. Previously, the longest air assault was conducted in 1991 during Operation Desert Storm.

The 10th Aviation Regiment is an aviation regiment of the U.S. Army. 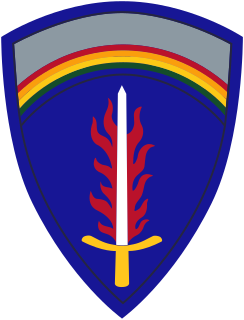