The Tham Khuyen is a palaeontological formation located in Vietnam. It dates to the Jurassic period. The cave is located in Lang Son province, about 125 kilometers northeast of Hanoi.

Gigantopithecus is an extinct genus of ape from the Early to Middle Pleistocene of southern China, represented by one species, G. blacki. The remains of Gigantopithecus, two third molar teeth, were first identified in a drugstore by anthropologist Ralph von Koenigswald in 1935, who subsequently described the ape. In 1956, the first mandible and over 1,000 teeth were found in Liucheng, and numerous more remains have since been found in at least 16 sites. Only teeth and 4 mandibles are known currently, and other skeletal elements were likely consumed by porcupines before they could fossilise. Gigantopithecus was once argued to be a hominin, a member of the human line, but it is now thought to be closely allied with orangutans, classified in the subfamily Ponginae.

Tai Lue or Tai Lɯ, Tai Lü, Thai Lue, Tai Le, Xishuangbanna Dai is a Tai language of the Lu people, spoken by about 700,000 people in Southeast Asia. This includes 280,000 people in China (Yunnan), 200,000 in Burma, 134,000 in Laos, 83,000 in Thailand, and 4,960 in Vietnam. The language is similar to other Tai languages and is closely related to Kham Mueang or Tai Yuan, which is also known as Northern Thai language. In Yunnan, it is spoken in all of Xishuangbanna Dai Autonomous Prefecture, as well as Jiangcheng Hani and Yi Autonomous County in Pu'er City.

Phạm Ngũ Lão street is located in District 1 of Ho Chi Minh City, formerly Saigon, Vietnam. It was named after Phạm Ngũ Lão, the national hero. The intersection of Phạm Ngũ Lão and Đề Thám streets are referred to as the backpacker district of Saigon. This area is frequented by Ho Chi Minh city locals and tourist who flock to the area markets to buy cheap clothes, DVDs, souvenirs, and war memorabilia. The many bars and cafes in this district are conveniently located near Saigon's city centre. In the Vietnamese language, this area is called "khu Tay ba lo".

Yên Thế is a rural district of Bắc Giang Province in the Northeast region of Vietnam. As of 2019 the district had a population of 110,920. The district covers an area of 301 km2. The district capital lies at Phồn Xương. The district is also the site of the Yên Thế Insurrection.

Bình Gia is a rural district of Lạng Sơn Province in the Northeast region of Vietnam. As of 2003, the district had a population of 54,349. The district covers an area of 1,091 km². The district capital lies at Bình Gia.

Wat Tham Saeng Phet is a Buddhist temple near Amnat Charoen, Thailand. It is located on Amnat Charoen-Khemarat Road 18 kilometres from the Amnat Charoen, 2 kilometres off the main road uphill. Located on a large sandstone plain, the temple has a vihara, a pagoda, and a huge reclining Buddha. North of the vihara is a large cave housing a Buddha image. This cave is named Saeng Phet or "diamond’s glitters" due to its flashing glitter rock. Wat Tham Saeng Phet is meditation centre of those who honour Ajahn Chah, a famous monk from Wat Nong Pah Pong. Foreign monks often practice mediation here. 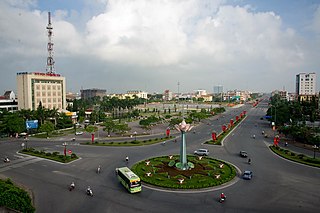 Hưng Yên is a city in Vietnam. It is the provincial capital of Hưng Yên Province and is a third-graded city according to Vietnam's city classification table.

Dam Sen Cultural Park is an amusement park located in District 11, Ho Chi Minh City, Vietnam. The park has an area of 50 hectares, of which 20% comprises lakes and 60% trees and gardens.

The 9th Infantry Division of the Army of the Republic of Vietnam (ARVN)—the army of the nation state of South Vietnam that existed from 1961 to 1975—was part of the IV Corps that oversaw the southernmost region of South Vietnam, the Mekong Delta. 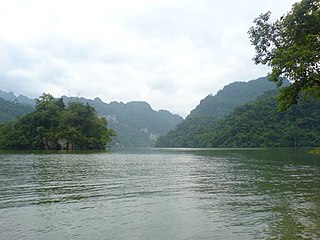 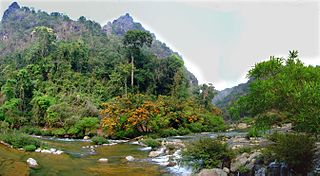 The Xe Bang Fai River is a river in Laos. It originates in the Annamite Range on the border between Laos and Vietnam at 17°3′1″N106°20′54″E. It flows through Khammouane Province and Savannakhet Province. 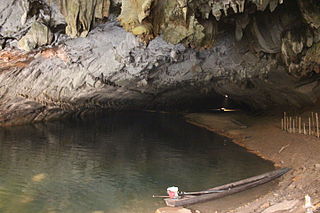 Tham Kong Lo or Kong Lor Cave is a karst limestone cave in Phu Hin Bun National Park, in Khammouane Province, Laos. It is located roughly 130 kilometres (81 mi) north of Thakhek, on the Nam Hin Bun River, which flows into the cave. The karst formation is dramatic and the cave has been cited as a "one of Southeast Asia's geological wonders".

Tham Lod Rockshelter, first researched by Rasmi Shoocongdej from Silpakorn University, funded by the Thai Research Fund, was a prehistoric cemetery and a workshop located in Northern Thailand known to have human inhabitants from the late Pleistocene to the late Holocene period Additionally, Tham Lod is near Ban Rai, another rock shelter and is in the vicinity of two well known caves, Spirit Cave and Tham Lot cave. Recent researches and carbon dating suggested that Homo sapiens have occupied the area. These researches provide more detail on the activities by the humans in the area which includes burials, living habits, gathering, and tool making, and social interactions.

Tham An Mah, is an archaeological site located in the Luang Prabang Province of Laos. The site was initially excavated in 2010 by a joint team of the Middle Mekong Archaeological Project and the Department of Heritage of Laos. Perhaps most important is the site's status as one of the stone jar burial sites from iron age Laos, the most famous of which is the Plain of Jars. Test excavations in 2010 included two trenches. Finds from trench B included a circular stone disk, possibly made of limestone or a similar material. The initial reports listed the possibility that the disk represented a jar covering or grave marker similar to those found on the Plain of Jars. The B trench also included the remains of four pots, one of which was directly under the discovered disk and accompanied by loose remains. The single datable piece of material that has thus far been recorded was from the lowermost portion of the excavation and gave a date of c. 13,000, which could indicate an earlier site not recorded. The site also included a Buddhist painting on the cave walls that villagers believed was from the 1950s.

The Special Honours Lists for Australia are announced by the Sovereign and Governor-General at any time.

Operation Sheridan Sabre was a security operation during the Vietnam War in Bình Long Province to prevent People's Army of Vietnam (PAVN) infiltration from Cambodia, that took place from 7 November 1968 to 4 April 1969.