Thanjai N. Ramaiah Dass (1914-1965) was an Indian poet and script writer who wrote mainly in the Tamil language. He wrote more than 500 lyrics for Tamil films.

Born to Narayanasamy and Pappu at Manampoochavadi in Thanjavur district, he had his primary and secondary education at St. Peters Higher Secondary school in Thanjavur. Then he graduated as a Pulavar from Karanthai Thamizh Sangam. He was trained as a teacher. [1]

He started his career as a teacher in a primary school in Thanjavur. While he was working as a teacher, he became interested in stage plays. Soon he joined a drama troupe Sudharsana Ghana Sabha founded by Jagannatha Naidu, as a writer. Then he created his own drama troupe Jayalakshmi Ghana Sabha and produced plays like Macharegai, Dhuruvan, Kambhar, Vidhiyin Pokku, Valli Thirumanam, Alli Arjuna, Pavalakodi and Pahadai Pannirendu. He staged these plays in several towns in Tamil Nadu. Actor and Film Producer T. R. Mahalingam once watched one of his plays and produced it as a film with the same title Macha Regai in 1950. Though the film failed in box office, it opened the way to Ramaiah Dass to settle in Chennai and work in Tamil films. [1]

Vijaya Productions was one of the leading film makers who made Tamil and Telugu films. Ramaiah Dass became a permanent writer in this film company from 1950 till 1960. He wrote screenplay, dialogues and lyrics to almost all the Tamil films produced by this company during this period. His songs in films like Pathala Bhairavi, Missiamma, Mayabazar became hits.

He was famous for coining words to suit the tune but without any meaning. They were called Jigina words and he was nicknamed as Dappanguthu Paadalaasiriyar (means one who writes lyrics to the beats on a tin box). However, those songs became hits. A case in point is the song "Jaalilo Jimkhaanaa, Dolilo Kumkaanaa" from the film Amara Deepam. None of the words had any meaning but the song was a hit. [2]

He produced a film titled "Lalithangi" with M. G. Ramachandran in the lead role. As per the story the main character is a religiously devoted young man. He created a scene with a song praising God. But M. G. R. who was a front-line member in Dravida Munnetra Kazhagam that had atheist policy, refused to act in the scene. 10 thousand feet of the film had already been shot. Anyway, Ramaiah Dass stopped the production and produced the same story with the title Rani Lalithangi with Sivaji Ganesan in the lead role. MGR challenged him in judicial courts but Ramaiah Dass was unperturbed. He won the case. However, MGR continued to be in good terms with him.

His daughter said by producing films he lost what he earned as a writer. [2]

He wrote a book titled Thirukural Isai Amudham in 1962. The book was released by M. G. Ramachandran who was the President of the South Indian Artistes Society at that time.

The Government of Tamil Nadu paid ₹600,000 to his family and made his works as public property. [1]

In 1952, a young man, Jesudoss was introduced to Ramaiah Dass. He made the young man as his assistant and christened him as Aroordas. (Jesudoss was from Thiruvarur.) Aroordas later turned out to be a most popular writer in Tamil films. [3]

Ramaiah Dass had two wives - Thaayaarammal and Ranganayagi. He had a daughter, Vijayarani and a son, Ravindran from each wife. Ravindran is an Editor in Prasad Lab while Vijayarani is a housewife. 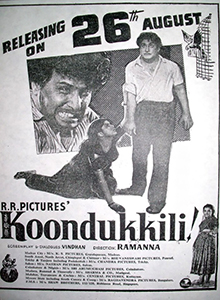 Koondukkili is a 1954 Indian Tamil-language drama film directed and co-produced by T. R. Ramanna. The film stars M. G. Ramachandran, Sivaji Ganesan and B. S. Saroja. Although a commercial failure, it gained historical reputation over time due to the fact it was the only film in which Ramachandran and Ganesan acted together.

Thaikkupin Tharam is a 1956 Indian Tamil-language film, the directorial debut of M. A. Thirumugam. The film stars M. G. Ramachandran and P. Bhanumathi. It was the first film produced by Sandow M. M. A. Chinnappa Thevar under the then newly-formed Thevar Films. Thaikkupin Tharam was released on 21 September 1956 and ran for over 100 days in theatres. 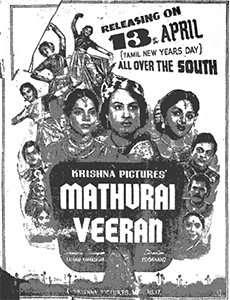 Madurai Veeran (transl. The Warrior of Madurai) is a 1956 Indian Tamil-language action film directed by D. Yoganand, written by Kannadasan, and produced by Lena Chettiar. Based on the folklore legend turned deity of the same name, it stars M. G. Ramachandran as the eponymous character, with P. Bhanumathi and Padmini playing his love interests. T. S. Balaiah, N. S. Krishnan and T. A. Mathuram play supporting roles.

Rani Lalithangi is a 1957 Indian Tamil-language historical drama film directed by T. R. Raghunath, starring Sivaji Ganesan and P. Bhanumathi. The film, a remake of the 1935 film Lalithangi, had musical score by G. Ramanathan and was released on 21 September 1957.

Naalvar is a 1953 Tamil-language drama film directed by V. Krishnan. The film stars A. P. Nagarajan, Kumari Thankam, N. N. Kannappa, M. N. Krishnan and T. P. Muthulakshmi in major roles. Nagarajan, who played the main lead was also the writer of the film. The film revolves around a family consisting of four siblings.

Gulebakavali is a 1955 Indian Tamil-language action adventure film produced and directed by T. R. Ramanna, and written by Thanjai N. Ramaiah Dass. The film stars M. G. Ramachandran, T. R. Rajakumari, Rajasulochana and G. Varalakshmi. Based on the story of the same name from the Arabic folklore collection, One Thousand and One Nights, it tells the story of a young prince who sets out to the kingdom of Bakavali to find a mysterious flower which is believed to have the power to restore his father's eyesight. The film was released on 29 July 1955.

Adutha Veettu Penn is a 1960 Indian Tamil-language romantic comedy film directed by Vedantam Raghavaiah and written by Thanjai N. Ramaiah Dass. The film stars Anjali Devi, T. R. Ramachandran and K. A. Thangavelu. It is a remake of the Bengali film Pasher Bari (1952), itself based on the namesake short story by Arun Chowdhury. In Adutha Veettu Penn, a simple man wants to impress a woman he loves by singing, but since he cannot, his friend, a singer, sings in secret while the simple man merely lip syncs, and wins the woman's love. The film was released on 11 February 1960, and became a success.

Maappillai (transl. Son-in-law) is a 1952 Indian Tamil-language drama film directed by T. R. Raghunath and written by V. N. Sambandam. The film stars T. R. Ramachandran, P. K. Saraswathi and T. K. Ramachandran. It revolves around an office boy who becomes wealthy in a rags to riches manner, and the attempts made by his boss's son to destroy him and usurp his wealth. The film was released on 7 November 1952 and became a success.

Ulagam Palavitham is a 1955 Indian Tamil-language film, directed by S. A. Murugesh. The film stars Sivaji Ganesan and Lalitha. The musical score of this film was composed by N. S. Balakrishnan. The film was dubbed in Telugu as Antha Peddale in 1959.

Anbu Engey is a 1958 Indian Tamil-language drama film, directed by D. Yoganand and produced by V. Govindarajan. Its story was written by Murasoli Maran and screenplay by Rajendra. The film stars S. S. Rajendran, K. Balaji, Pandari Bai and S. V. Ranga Rao, with Devika, T. R. Ramachandran, Manorama and Mynavathi in supporting roles. The film was released on 12 December 1958.

Arul Soosai Anthony Sami (1915–1998) better known as A. S. A. Sami was an Indian director and screenwriter who worked in Tamil films.

S. D. Sundharam also written as S. D. Sundaram, is an Indian Tamil playwright, dialogue writer and lyricist. He also co-directed one Tamil feature film and produced and directed one documentary film. He played minor roles in a few films.

Thedi Vandha Selvam is a 1958 Indian Tamil-language drama film produced and directed by P. Neelakantan. The film stars S. S. Rajendran, Rajasulochana and B. Saroja Devi. It was released on 16 July 1958 and emerged a box office success.

K. D. Santhanam was an Indian actor, writer and lyricist who worked mainly in Tamil films.

S. Yesudas known by his stage name Aaroor Dass, is an Indian stage, film and television Screenwriter who was active in Tamil cinema during the latter part of the 20th century. Aaroor Dass Written the story and dialogues for over 1000 films, who dominate and the Tamil film for more than 40 years. He wrote his first film for actor Sivaji Ganesan's Pasamalar (1961). He debuted as a director with the film Penn Endral Penn (1967)