BloodHorse is a multimedia news organization covering Thoroughbred racing and breeding that started with a newsletter first published in 1916 as a monthly bulletin put out by the Thoroughbred Horse Association. [1] In 1935 the business was purchased by the American Thoroughbred Breeders Association. [2] From 1961 to 2015, it was owned by the Thoroughbred Owners and Breeders Association, a non-profit organization that promotes Thoroughbred racing, breeding, and ownership. [1] The company operated as Blood-Horse Publications beginning in 2000. In 2015, The Jockey Club purchased a majority share in the publication. The magazine changed to a monthly distribution in April 2021. [3]

The magazine won acclaim for its exclusive report indicating that 1986 Kentucky Derby winner Ferdinand had been slaughtered by his owners overseas after a marginal stud career. The news resulted in increased efforts to save retired racehorses.

The Blood-Horse has an online version, at bloodhorse.com. [6] In August 2015 Blood-Horse Daily was launched, the content is available on an app, by email subscription or downloadable from the website [7]

For the new millennium, the magazine compiled a List of the Top 100 U.S. Racehorses of the 20th Century which was published in book form.

In 1916, the first Kentucky Thoroughbred Horse Association Bulletin was posted – Volume 1, Number 1 was published August 1, 1916 by the Kentucky Thoroughbred Horse Association to serve a small community of breeders. The Bulletin was renamed The Blood-Horse and taken to a weekly frequency in 1929 and expanded to serve a global audience. The first issue of the public The Blood-Horse was published May 11, 1929 and held Blue Larkspur as the cover image.

Thomas Cromwell was the first editor of magazine. Joe Estes joined The Blood-Horse in 1930 and later became the second editor-in-chief. [8] He was succeeded by Kent Hollingsworth, Ed Bowen, Ray Paulick and Dan Liebman. [9] 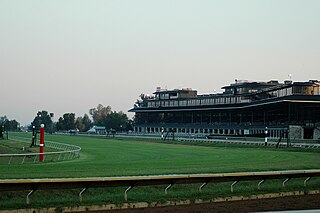 Keeneland Association, Inc. is an equine business based in Lexington, Kentucky. It includes two distinct divisions: the Keeneland Race Course, a Thoroughbred racing facility, and Keeneland Sales, a horse auction complex. It is also known for its reference library. 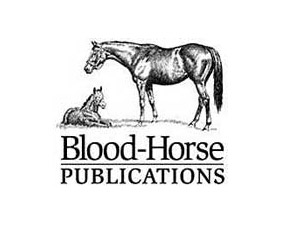 Blood-Horse Publications is an American multimedia publishing house focused on horse-related magazines headquartered in Lexington, Kentucky. It began in 1916 through its flagship magazine, The Blood-Horse. From 1961 to 2015, Blood-Horse Publications was owned by the Thoroughbred Owners and Breeders Association, a non-profit organization that promotes Thoroughbred racing and breeding. In 2015, The Jockey Club became the majority owner. According to the company, Blood-Horse has subscribers from over 80 countries worldwide. and according to ESPN is the thoroughbred industry's most-respected trade publication. 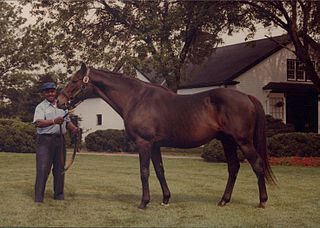 Nashua was an American-born thoroughbred racehorse, best remembered for a 1955 match race against Swaps, the horse that had defeated him in the Kentucky Derby.

The Eclipse Award is an American Thoroughbred horse racing award named after the 18th-century British racehorse and sire, Eclipse. 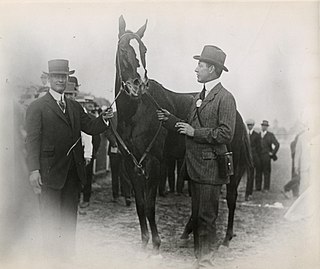 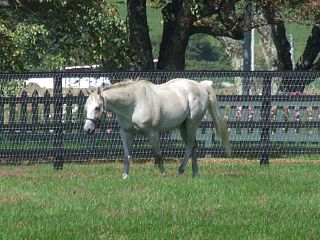 Silver Charm is a champion American Thoroughbred racehorse who won the 1997 Kentucky Derby and Preakness Stakes and 1998 Dubai World Cup. He stood at stud in both America and Japan and is now retired at Old Friends Farm in Kentucky. Upon the death of Hansel, Silver Charm became the oldest living winner of the Preakness Stakes. 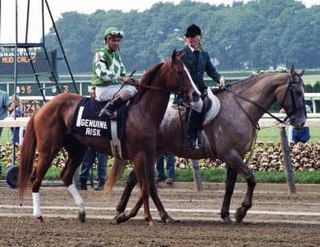 Genuine Risk was an American Thoroughbred racehorse and broodmare best known for winning the 1980 Kentucky Derby.

William T. Young was an American businessman and major owner of thoroughbred racehorses. 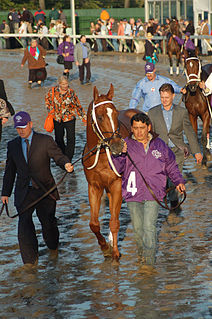 Spendthrift Farm is a thoroughbred race horse breeding farm and burial site in Lexington, Kentucky currently owned by B. Wayne Hughes. It was founded by Leslie Combs II and named for the great stallion Spendthrift, who was owned by Combs' ancestor, Daniel Swigert of Elmendorf Farm. Spendthrift was the great-grandfather of Man o' War.

Fred William Hooper was an American Thoroughbred racehorse owner and breeder. He was a member of The Jockey Club, an honorary director of the Breeders' Cup, and one of the founders of the Thoroughbred Owners and Breeders Association and one of its first presidents. 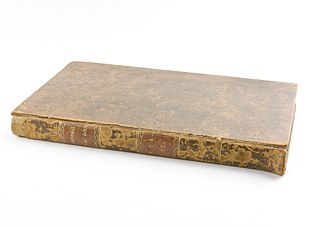 The Jersey Act was introduced to prevent the registration of most American-bred Thoroughbred horses in the British General Stud Book. It had its roots in the desire of British horse breeders to halt the influx of American-bred racehorses of possibly impure bloodlines during the early 20th century. Many American-bred horses were exported to Europe to race and retire to a breeding career after a number of US states banned gambling, which depressed Thoroughbred racing as well as breeding in the United States. The loss of breeding records during the American Civil War and the late beginning of the registration of American Thoroughbreds led many in the British racing establishment to doubt that the American-bred horses were purebred.

Arthur B. "Bull" Hancock Jr. was a breeder and owner of thoroughbred racehorses at Claiborne Farm in Paris, Kentucky, United States. He acquired European horses to breed in the United States, in particular Nasrullah and Princequillo, and gained great standing in the racing world as a result.

The American Racing Manual (ARM) is an annual publication now published by the Daily Racing Form Press. It covers Thoroughbred horse racing in the United States. The last DRF published edition was for 2020. Content of the work covers the previous years racing performances for the United States, thus the 2011 edition covers all racing for 2010. Also included are histories of major stakes races, race records of the year-end champions, a section giving all Hall of Fame horses, information on the Breeder's Cup races, and some information on non-American racing. Statistics on the year's record of every racehorse, racehorse owner, racehorse trainer, and racehorse breeder are also part of the content along with track speed records and world records. Articles about subjects connected with the racing industry as well as analyzing trends and developments from the year are also included.

Walter Joseph Salmon Sr. was a New York City real estate investor and developer. According to the New York City Landmarks Preservation Commission, Salmon was "responsible for rebuilding the north side of West 42nd Street between Fifth and Sixth Avenues in the first decades of the 20th century". As well, Salmon was a major figure in the business of Thoroughbred horse racing whom The Blood-Horse magazine called "one of the leading breeder/owners of the 20th century."

Sol Kumin is an American business leader, Thoroughbred racehorse owner and philanthropist. In May 2018, he became the first owner since 1952 to have Kentucky Oaks and Derby winners in the same weekend. He was a co-owner of Justify; winner of the Triple Crown.