The Green Room is the debut album from DJ Shaky Bonez(a.k.a. D-Loc of the Kottonmouth Kings), [1] [2] released on September 4, 2001 with Suburban Noize Records. 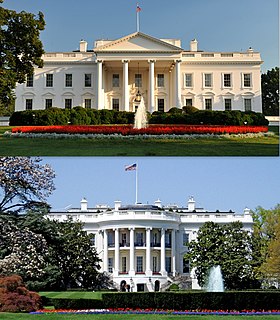 The White House is the official residence and workplace of the president of the United States. It is located at 1600 Pennsylvania Avenue NW in Washington, D.C., and has been the residence of every U.S. president since John Adams in 1800. The term "White House" is often used as a metonym for the president and their advisers. 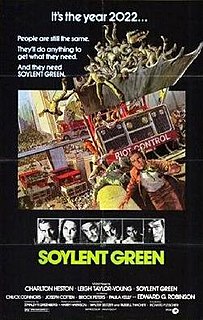 Soylent Green is a 1973 American ecological dystopian thriller film directed by Richard Fleischer and starring Charlton Heston and Leigh Taylor-Young. Edward G. Robinson appears in his final film. Loosely based on the 1966 science fiction novel Make Room! Make Room! by Harry Harrison, it combines both police procedural and science fiction genres: the investigation into the murder of a wealthy businessman; and a dystopian future of dying oceans and year-round humidity due to the greenhouse effect, resulting in suffering from pollution, poverty, overpopulation, euthanasia and depleted resources. 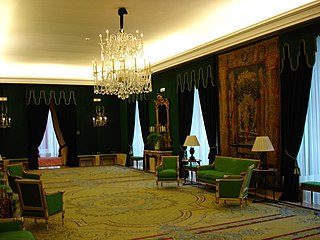 In show business, the green room is the space in a theatre or similar venue that functions as a waiting room and lounge for performers before, during, and after a performance or show when they are not engaged on stage. Green rooms typically have seating for the performers, such as upholstered chairs and sofas. 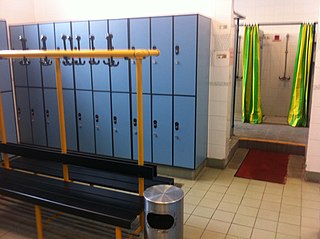 A changing room, locker room, dressing room or changeroom is a room or area designated for changing one's clothes. Changing rooms are provided in a semi-public situation to enable people to change clothes with varying degrees of privacy.

The Deluxtone Rockets is a band from Muskegon, Michigan. It began as a punk band, but by the time of signing to Tooth & Nail Records it had evolved into a swing revival outfit.

The Green Room is one of three state parlors on the first floor of the White House, the home of the President of the United States. It is used for small receptions and teas. During a state dinner, guests are served cocktails in the three state parlors before the president, first lady, and a visiting head of state descend the Grand Staircase for dinner. The room is traditionally decorated in shades of green. 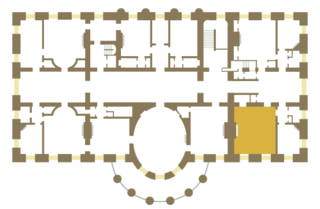 The Lincoln Bedroom is a bedroom which is part of a guest suite located in the southeast corner of the second floor of the White House in Washington, D.C. The Lincoln Sitting Room makes up the other part of the suite. The room is named for President Abraham Lincoln, who used the room as an office. 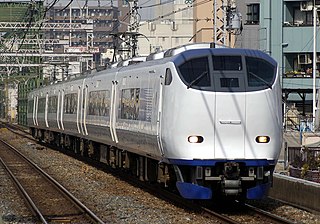 The 281 series is a DC electric multiple unit (EMU) train type operated by West Japan Railway Company (JR-West). It was introduced on September 4, 1994, for passengers travelling to/from Kansai International Airport. Provisions are made for luggage racks and dedicated luggage room.

The following outline is provided as an overview of and topical guide to construction:

Green Templeton College (GTC) is a constituent college of the University of Oxford in the United Kingdom. The college is located on the previous Green College site on Woodstock Road next to the Radcliffe Observatory Quarter in North Oxford and is centred on the architecturally important Radcliffe Observatory, an 18th-century building, modelled on the ancient Tower of the Winds at Athens. It is the university's second newest graduate college, after Reuben College, having been founded by the historic merger of Green College and Templeton College in 2008.

Samara, also known as the John E. Christian House, is a house designed by Frank Lloyd Wright located in West Lafayette, Indiana. The home is an example of the Usonian homes that Wright designed. Samara was built from 1954 to 1956 and was still occupied by the original owner, John E. Christian, until he died on July 12, 2015.

Carol Sobieski was an American screenwriter whose work included the scripts for Annie (1982) and Fried Green Tomatoes (1991).

Quick Before They Catch Us was a 1966 British action/adventure children's television series. It starred then child actors Pamela Franklin, Teddy Green and David Griffin as three teenagers who become amateur detectives in Swinging London during the mid-1960s. Although the series was short-lived, all three stars went on to have long and successful television careers in both the United Kingdom and the United States. Its theme song, written and performed by Brian Epstein's Paddy, Klaus and Gibson, later became a popular tune and one of the group's first hits after releasing it as a single. 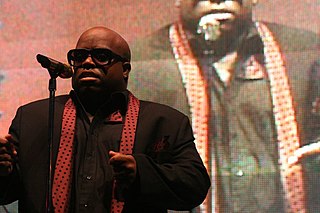 Sondrio railway station serves the town and comune of Sondrio, in the region of Lombardy, northern Italy. Opened in 1885, it is located on the Tirano–Lecco railway.

The Green Room with Paul Provenza was a talk show on Showtime, hosted by Paul Provenza. Each episode featured a panel of guests discussing comedy.

Style Network was an Australian pay television channel that owned by Universal Networks International. It was a domestic version of the American Style Network, and much like its American counterpart it featured fashion, design, and programming for women. 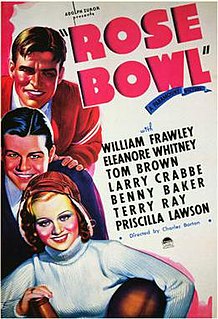