The Icemen were created late 1982. Founded by the guitarist and songwriter Marco Abularach, he was joined by Noah Evans on bass guitar and Mackie Jayson on drums (Bad Brains, Cro-Mags).

Abularach and Evans grew up together in the Westbeth Artists Community of New York's Greenwich Village, and shared a recording/rehearsal studio there - Studio 50 otherwise known as SD50. They met Mackie at The High School of Music & Art.

All of The Icemen's music and lyrics were written by Marco Abularach who, in addition, created all band related artwork. Most of their recordings were produced by Evans, who also has worked as producer and/or engineer as well as live sound for many other bands.

The Icemen played their first show at CBGB 11 April 1983, a memorial for the late Patrick Mack of the Stimulators. [1] For that one show they had Miles Kelly on vocals (Guitarist of Frontline).

Next The Icemen turned to John Gamble on vocals. In 1984 they recorded a pair of songs "The Iceman" & "You Let It Go To Your Head" and at the time had hoped to release it as a 7" although that never happened. These tracks ended up being used primarily to get gigs. With this lineup (Abularach, Evans, Jayson, Gamble) The Icemen played shows through '84 and '85 in NYC mostly at CBGB and Pyramid Club. Sometime not long after that Gamble was released from the band.

What followed was a period with the band unable to find a vocalist they would accept. They continued to write songs and record at Nola Penthouse Studio where Evans worked as an engineer. Located in the Steinway Building on 57th street New York, Evans worked in the classic 24 track analog studio engineering & producing, everything from Jazz to commercial "Jingles". During this time the songs for the R.I.P. EP were written and early versions recorded.

It was 1987 when they finally settled for Carl DeMola (Griffin) and this would be the lineup best known to most. The Icemen would perform live shows through the next five years, often at CBGB, their "Home Base". In 1991 The Icemen released the "R.I.P." EP on Blackout Records. [2] This 4 song EP contained the following tracks: Rest in Peace, Shadow Out of Time, The Harsh Truth, No Guts No Glory. It was released on both CD and Cassette, in addition Rest in Peace & The Harsh Truth were released on 7" including a limited edition in blue or red vinyl. R.I.P. was The Icemen's only official release, no other material written by creator Marco Abularach and performed by original members Abularach, Evans, Jayson has ever been released. While the band continued to perform through 1992, frustration at lack of musical growth continued to mount and it would not be much longer before The Icemen would release vocalist Carl DeMola from their band. While they would search for a new vocalist for a period of time, this was essentially the end of the official Icemen.

In 2008 The Icemen returned. Having transferred all of their many original tape recordings from analog to digital, they released two formerly unreleased tracks. On Reaper Records [3] colored vinyl 7" featuring "The Iceman" - the first ever recording by The Icemen (1984 Nola Studios New York) and "It'll Be Your Grave" - another of their earliest recordings, one of several sessions they recorded at Nola Studios from 1984-1987. [4] 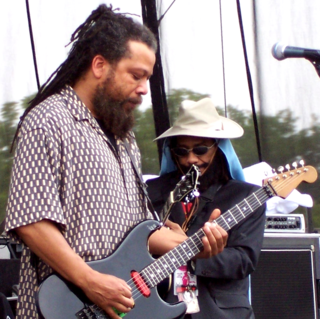 Bad Brains are an American rock band formed in Washington, D.C. in 1977. They are widely regarded as among the pioneers of hardcore punk, though the band's members have objected to this term to describe their music. They are also an adept reggae band, while later recordings featured elements of other genres like funk, heavy metal, hip hop and soul. Bad Brains are followers of the Rastafari movement.

Dead Boys are an American punk rock band from Cleveland, Ohio. The band was among the first wave of punk bands, and was known as one of the rowdiest and most violent punk groups of the era. Dead Boys were formed by vocalist Stiv Bators, lead guitarist Cheetah Chrome, rhythm guitarist Jimmy Zero, bassist Jeff Magnum, and drummer Johnny Blitz in 1976, splintering off from the band Rocket From The Tombs. They released two studio albums, Young Loud and Snotty and We Have Come for Your Children.

Agnostic Front is an American hardcore punk band from New York City. Founded in 1980, the band is considered an important influence to the New York hardcore scene, as well as for pioneering the crossover thrash genre. 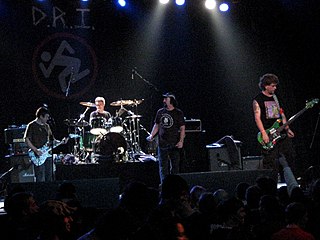 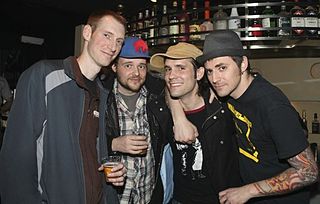 Circle of Dead Children is a deathgrind group which formed on October 24, 1998, in Pittsburgh, Pennsylvania. After the release of a self-titled demo that was put out the same year they formed, Circle of Dead Children signed on with Willowtip Records to release their debut full-length album, Starving the Vultures, which comprised the demo tracks as well as several new ones.

The Mutants are an American band, notable in the history of San Francisco punk rock and new wave music. They are known for their theatrical performances which often include elaborate props, projections, and comical antics. They are credited with being one of the first "Art-punk" bands in San Francisco, and were one of the most popular bands of the San Francisco punk scene during the late 1970s and early 1980s.

Sheer Terror are an American hardcore punk band from New York City. The band was one of the first to combine elements of heavy metal with a hardcore punk base, pioneering a heavier style of hardcore that would create many bands in the following decades. Formed in late 1984, the band stayed together until 1998, through numerous lineup changes and shifts in musical style. In October 2004, the band reunited and gave two shows at New York City's CBGB Club.

Cable is an American band formed in 1994 in Rockville, Connecticut. They combine a hardcore punk and emo aesthetic with a rhythmically complex, often discordant metal-influenced musical approach. Lineup changes and delays between recordings may have hindered their notoriety over the years.

Brightside was the first of three full-length albums released by New York hardcore band, Killing Time. It was released in November 1989 on In Effect Records, a division of Relativity Records, and subsequently re-released in 1995 by Lost & Found Records in Europe, and Victory Records in the U.S. – both with bonus tracks. Both re-issue versions have three tracks from the Happy Hour EP released in 1992. The Victory Records re-issue also has material from the first Raw Deal demo made in 1988, of which five tracks were re-recorded for this album.

Leeway is an American crossover thrash band formed in Astoria, New York, United States, in 1984 by guitarist A.J. Novello and vocalist Eddie Sutton under the name The Unruled. To date, the band has released four studio albums — Born to Expire (1989), Desperate Measures (1991), Adult Crash (1994) and Open Mouth Kiss (1995) — and broken up and reformed several times over the years. Despite never achieving notable commercial success, Leeway is considered to be an integral part of the 1980s NYHC and crossover thrash scenes. 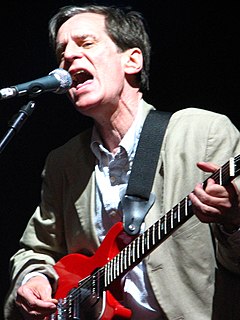 Ritual Tension is an American experimental rock band that formed in 1983 in New York City. They released two studio albums and an EP, all recorded at Martin Bisi's BC Studio in Brooklyn, and a live album taken from shows at CBGB, before their initial dissolution in 1990. At the same time, various configurations of the band members took part in art performances around Manhattan at venues such as Pyramid Club and PS 122.