The Melodians are a rocksteady band formed in the Greenwich Town area of Kingston, Jamaica, in 1963, by Tony Brevett (born 1949, nephew of The Skatalites bassist, Lloyd Brevett), Brent Dowe and Trevor McNaughton. [1] Renford Cogle assisted with writing and arranging material.

Trevor McNaughton had the idea of putting a group together and contacted the then 14-year-old Tony Brevett, who had already had success in local talent shows. [1] Brevett recruited his friend Brent Dowe and the group was formed, with Brevett taking on lead vocal duties. [1] Bramwell Brown and Renford Cogle also had short stints in the group in its early days, and Cogle became one of the group's main songwriters. [1]

The group recorded some material with Prince Buster before Ken Boothe introduced them to Coxsone Dodd's Studio One label where in 1966 they recorded "Lay It On" (one of the first records to reflect the shift from ska to rocksteady), "Meet Me", "I Should Have Made It Up" and "Let's Join Hands (Together)". [1] Lead vocal duties were now shared between Brevett and Dowe. [1] From 1967 to 1968 they had a number of hits on Duke Reid's Treasure Isle label, including "You Have Caught Me", "Expo 67", "I'll Get Along Without You", and "You Don't Need Me". [1] After recording "Swing and Dine" for record producer Sonia Pottinger, they had further hits with "Little Nut Tree" before recording their biggest hit, "Rivers of Babylon" for Leslie Kong. [1] This song became an anthem of the Rastafarian movement, and was featured on the soundtrack of the movie The Harder They Come . [2] In the early 1970s Brevett also recorded as a solo artist, having his greatest success with "Don't Get Weary". [1] After Kong's death in 1971, they recorded for Lee Perry and Byron Lee's Dynamic Studios. In 1973, Brent Dowe left the group for a solo career. The group reformed briefly a few years later, and again in the early 1980s.

The Melodians regrouped again in the 1990s as part of the roots revival. In 1992 they recorded "Song of Love", which was issued on the Tappa Zukie label. Throughout the later 1990s they continued touring internationally, including appearing at the Sierra Nevada World Music Festival in California in 2002. In 2005 The Melodians embarked on a West Coast tour.

The death of Tony Brevett in 2013 left McNaughton as the only surviving original member. McNaughton toured as a solo artist in 2014 and subsequently recruited Taurus Alphonso (formerly of the Mellow Tones) and Winston Dias (formerly of The Movers) to form a new Melodians line-up. [3] As of February 2015, the group were recording a new album in Florida with producer Willie Lindo. [3] The Return of the Melodians was released in May 2017 and went on to reach no. 19 on the Billboard Reggae Albums chart. [4]

In February 2017, the Melodians received an 'Iconic Award' from the Jamaica Reggae Industry Association (JaRIA). [5]

On the evening of 29 January 2006, after a rehearsal in preparation for a performance to take place the following weekend at the Jamaican Prime Minister’s residence, Brent Dowe suffered a fatal heart attack at the age of 59. [6] The remaining original members Tony Brevett and Trevor McNaughton continued touring in Europe and the U.S. backed by the Yellow Wall Dub Squad.

McNaughton, the last surviving original member of the group, died on 20 November 2018 at the Kendrick Rehabilitation Hospital in Hollywood, Florida, from respiratory failure. [5] He was 77, and had been admitted to hospital the previous month. [5]

Alton Nehemiah Ellis was a Jamaican singer-songwriter. One of the innovators of rocksteady who was given the informal title "Godfather of Rocksteady". In 2006, he was inducted into the International Reggae And World Music Awards Hall Of Fame. 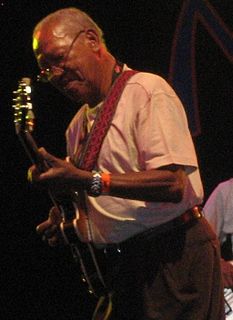 Ernest Ranglin is a Jamaican guitarist and composer who established his career while working as a session guitarist and music director for various Jamaican record labels including Studio One and Island Records. Ranglin played guitar on many early ska recordings and helped create the rhythmic guitar style that defined the form. Ranglin has worked with Theophilus Beckford, Jimmy Cliff, Monty Alexander, Prince Buster, the Skatalites, Bob Marley and the Eric Deans Orchestra. He is noted for a chordal and rhythmic approach that blends jazz, mento and reggae with percussive guitar solos incorporating rhythm 'n' blues and jazz inflections.

There are several subgenres of reggae music including various predecessors to the form.

Trojan Records is a British record label founded in 1968. It specialises in ska, rocksteady, reggae and dub music. The label currently operates under the Sanctuary Records Group. The name Trojan comes from the Croydon-built Trojan truck that was used as Duke Reid's sound system in Jamaica. The truck had "Duke Reid - The Trojan King of Sounds" painted on the sides, and the music played by Reid became known as the Trojan Sound.

Clancy Eccles was a Jamaican ska and reggae singer, songwriter, arranger, promoter, record producer and talent scout. Known mostly for his early reggae works, he brought a political dimension to this music. His house band was known as The Dynamites.

Phyllis Dillon was a Jamaican rocksteady and reggae singer who recorded for Duke Reid's lucrative Treasure Isle record label in the late 1960s and early 1970s.

Keith Anderson CD, better known by the stage name Bob Andy, was a Jamaican reggae vocalist and songwriter. He was widely regarded as one of reggae's most influential songwriters.

Lloyd Parks is a Jamaican reggae vocalist and bass player who has recorded and performed as a solo artist as well as part of Skin, Flesh & Bones, The Revolutionaries, The Professionals, and We the People Band.

Ainsworth Roy Rushton Shirley, better known simply as Roy Shirley, and also known as King Roy Shirley and The High Priest, was a Jamaican singer whose career spanned the ska, rocksteady and reggae eras, and whose "Hold Them" is regarded by some as the first ever rocksteady song. He was also one of the original members of The Uniques.

The Jamaicans were a ska/rocksteady group formed in Jamaica in 1967, consisting of members Tommy Cowan, Norris Weir, Derrick Brown and Martin Williams.

Renford "Rennie" Cogle, is a singer and songwriter whose career spans more than three decades and about as many continents. His musical career started in 1972 when his friend, the late Delroy "Smooth Operator" Wilson, listened to his music and recorded "You Keep On Running". This was to be the first of many number one hits written by Cogle. Subsequent songs such as "Sweet Rose"; "Ring of Gold"; "Rock It To Me"; "Babylon Policy" and "Passion of Love" became international hit singles and were performed by Tony Brevett and The Melodians.

Jamar Rolando McNaughton, popularly known as Chronixx, is a Jamaican reggae artist. His stage name replaced the name "Little Chronicle" which he was given because of his father, the singer "Chronicle". Chronixx and his music has been branded as a "Reggae Revival", alongside other reggae musicians including Alborosie, Dre Island, Jah Bouks, Jah9, Protoje, Kelissa, Jesse Royal, Keznamdi and Kabaka Pyramid. His lyrical content revolves around themes of anti-war, romantic declarations and resiliency.

Earl “Paul” Douglas is a Jamaician Grammy Award-winning drummer and percussionist, best known for his work as the drummer, percussionist and bandleader of Toots and the Maytals. His career spans more than five decades as one of reggae's most recorded drummers. Music journalist and reggae historian David Katz wrote, “dependable drummer Paul Douglas played on countless reggae hits."

Clifton "Jackie" Jackson is a Jamaican bass player, who was an important session musician on ska, rocksteady and reggae records in the 1960s and 1970s, and later a member of Toots and the Maytals.