A concert tour (or simply tour) is a series of concerts by an artist or group of artists in different cities, countries or locations. Often concert tours are named to differentiate different tours by the same artist and to associate a specific tour with a particular album or product (for example: Celine Dion's Courage World Tour or U2's The Joshua Tree Tour named after the albums). Especially in the popular music world, such tours can become large-scale enterprises that last for several months or even years, are seen by hundreds of thousands or millions of people, and bring in millions of dollars (or the equivalent) in ticket revenues. A performer who embarks on a concert tour is called a touring artist. [1] [2]

The main challenge in concert tours is how to move the performance's logistics from one venue to another venue, especially for a transcontinental tour. Tour logistics should be very organized and everything has to happen on time and in the right order as planned. [4] Autoweek magazine estimated 30 to 50 trucks were required by Taylor Swift's 1989 World Tour to bring all the stage, sound equipment, instruments, props, and clothes. [5] When Beyoncé visited the United Kingdom with her 2016 Formation World Tour, it took seven Boeing 747 air freighters and a fleet of more than 70 trucks to get her stage set and other gear to the venues. The logistics phase of that tour didn't include transportation of the backstage staff, musicians, performers, and the singer herself. [6]

Rock-It Cargo is one of the companies that provided freight forwarding for some of the biggest names in music, such as Bruce Springsteen, Madonna, and The Police. Before the start of a tour, Rock-It Cargo had to move gear to a central location—either a rehearsal spot or the site of the first engagement. Then it arranged to transport whatever gear the band requires from one venue to the next. The company's vice president, Ed Butler, said "We use different freight modes—local trucking, cross-country trucking, air freight, and ocean freight. We also provide import, export, customs clearance, carnets (a document that allows a shipper—including a band—to move equipment across international boundaries and clear customs without paying duties)—everything a tour would need." [4]

Global touring revenue reported to Billboard Boxscore exceeded $5.5 billion in 2016. [12] Due to the collapse of record sales in the 21st century, concert tours have become a major income for recording artists. [13] Besides the tickets, touring also generates money from the sales of merchandise and meet-and-greet packages. [14] [15]

The mobility of concert tours requires a lot of costs, times, and energy. British singer Adele expressed her unhappiness of concert tours, saying "Touring is a peculiar thing, it doesn't suit me particularly well. I'm a real homebody and I get so much joy in the small things." [16] A concert residency concept is offered as an alternative to performers who just need to stay in one venue and the fans come to see them. [17] American singer Lady Gaga, who cancelled the 2018 European leg of her Joanne World Tour, signed for a Las Vegas residency to help managing her fibromyalgia illness, which can be exacerbated by touring. [18]

The 2015 study by charity Help Musicians UK found that over 60% of musicians suffered from depression or other psychological issues, with touring an issue for 71% of respondents. [19]

Madonna Louise Ciccone is an American singer, songwriter, and actress. Referred to as the "Queen of Pop" since the 1980s, Madonna is known for pushing the boundaries of songwriting in popular music and for the visuals she uses onstage and in music videos. She has frequently reinvented her music and image while remaining completely in charge of every aspect of her career. Her diverse works, which incorporated social, political, sexual, and religious themes, have generated both critical acclaim and controversy. Madonna is often cited as an influence by other artists.

The Blond Ambition World Tour was the third concert tour by American singer Madonna. It supported her successful fourth studio album Like a Prayer (1989), and the soundtrack album to the 1990 film Dick Tracy, I'm Breathless (1990). Originally planned to be called "Like a Prayer World Tour", it was supposed to be sponsored by soft drink manufacturer Pepsi, whom Madonna signed a deal with. After the release of the accompanying music video for the single "Like a Prayer", which featured Catholic symbols such as stigmata, burning crosses and a dream about making love to a saint, the Vatican condemned it. Religious groups sought to ban the commercial and called for a boycott of Pepsi products and subsidiaries, leading the company to revoke the commercial and cancel Madonna's sponsorship contract. The Blond Ambition World Tour was officially announced by Sire Records on November 1989. In 2017, Rolling Stone magazine included the tour on the list of the best tours of the past 50 years.

The Girlie Show World Tour was the fourth concert tour by American singer and songwriter Madonna, in support of her fifth studio album, Erotica. Comprising 39 dates, the tour began in London on September 25, 1993 and ended in Tokyo on December 12 of the same year. The tour is estimated to have grossed over US$70 million. Additionally, it marked Madonna's first shows in Turkey, Israel, Puerto Rico, Argentina, Brazil, Mexico, and Australia.

Confessions Tour was the seventh concert tour by American singer-songwriter Madonna, launched in support of her tenth studio album, Confessions on a Dance Floor. The tour began in Inglewood, California on May 21, 2006 and ended in Tokyo, Japan on September 21 of the same year. It, additionally, marked the singer's first shows in Wales, Czech Republic, and Russia. 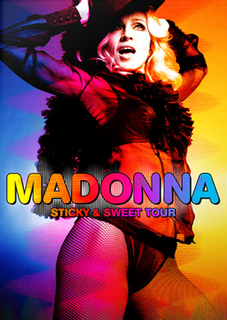 Sticky & Sweet Tour was the eighth concert tour by American singer Madonna. Staged to promote her eleventh studio album, Hard Candy, it began in August 2008 and was her first tour under a new recording and business deal with Live Nation. The tour was announced in February 2008, with dates for European and North American venues revealed. Though initially planned, the tour did not visit Australia due to financial problems and the financial recession. Costume designer Arianne Phillips designed the costumes, supported by a number of famous designers and brands. The stage for the main show was planned similarly to that of her previous 2006 Confessions Tour. After the tour concluded in 2008, Madonna announced plans of playing a second European leg in 2009 to play in territories she either had never been to or had not played for a long time.

The Billboard Live Music Awards is an annual meeting sponsored by Billboard magazine that honors the top international live entertainment industry artists and professionals. Established in 2004, it has thus been described as "part industry conference, part awards show". 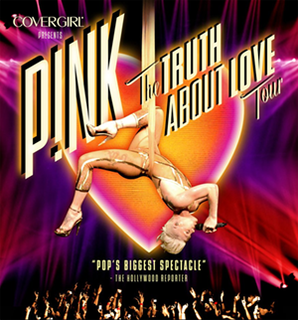 Rebel Heart Tour was the tenth concert tour by American singer Madonna, staged in support of her 13th studio album, Rebel Heart (2015). Comprising 82 shows, the tour visited North America, Asia, Europe, and Oceania. It began on September 9, 2015, in Montreal, Canada, at the Bell Centre and concluded on March 20, 2016, in Sydney, Australia at Allphones Arena. The tour was officially announced on March 1, 2015, through Madonna's website and was led by Live Nation Entertainment's Global Touring Division, helmed by Arthur Fogel; this was the fifth collaboration between Madonna and Live Nation as well as her third tour to be promoted by the company. Additionally, the tour marked the singer's first visits to Taiwan, Thailand, Hong Kong, Macau, Philippines, Singapore, and New Zealand, and was her first to visit Australia since The Girlie Show World Tour (1993).

Billy Joel in Concert is a concert tour by the American singer-songwriter Billy Joel. After several concerts beforehand, in the fall of 2013, the concert tour began in Sunrise, Florida, and is currently ongoing, continuing into 2020.

The Not in This Lifetime... Tour was a concert tour by hard rock band Guns N' Roses, spanning from April 1, 2016 to November 2, 2019. It featured classic lineup members Axl Rose, Slash and Duff McKagan, marking the first time since the Use Your Illusion Tour in 1993 that the three performed together. After the previous tour in 2014, guitarists DJ Ashba & Ron "Bumblefoot" Thal, bassist Tommy Stinson and keyboardist Chris Pitman left Guns N' Roses, leaving the band with several open spots. Former members Slash and McKagan rejoined the band and Melissa Reese joined as keyboardist. The group embarked on the world tour that spanned several continents, with 159 shows performed to date. The group welcomed former drummer Steven Adler to the stage for several shows as a guest spot, the first time he had played with the group since 1990. The tour has been a financial success, grossing over $563.3 million, making it the third-highest-grossing concert tour of all time. The tour was 2016's highest-earning per-city global concert tour as well as the fourth-highest-grossing overall that year. In 2017 the tour ranked as the second highest grossing worldwide tour. The tour was honored at the Billboard Touring Awards in November 2017, winning Top Tour/Top Draw and being nominated for Top Boxscore.

The Joshua Tree Tour 2017 and The Joshua Tree Tour 2019 were two worldwide concert tours by rock band U2 commemorating the 30th anniversary of their 1987 album The Joshua Tree. The 2017 tour visited stadiums over four legs: North America from May to July and in September, Europe from July to August, and Latin America in October. The 2019 tour visited Oceania and Asia in November and December, marking the band's first ever concerts in South Korea, Singapore, the Philippines, and India. The band played the whole Joshua Tree album during the concerts, which included their first live performances of the song "Red Hill Mining Town". It was the first time the group toured in promotion of an album from their back catalogue, rather than a new release. As part of the tour, U2 headlined the Bonnaroo Music Festival in Manchester, Tennessee, in June 2017. 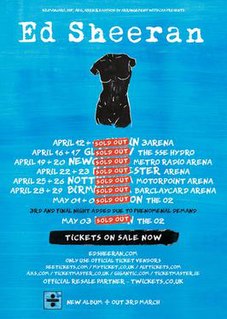 The ÷ Tour was the third world concert tour by English singer and songwriter Ed Sheeran, in support of his third studio album, ÷. Comprising 260 shows, it officially began on 16 March 2017, in Turin, Italy and ended on 26 August 2019, in Ipswich, England. Ticket sales started on 2 February 2017. The tour set world records for the highest-grossing concert tour and the most tickets sold by a tour. 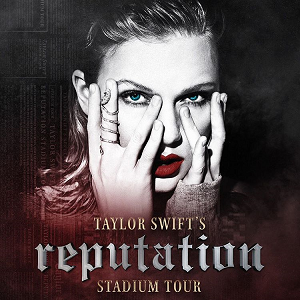 Taylor Swift's Reputation Stadium Tour was the fifth concert tour and first all-stadium tour by American singer-songwriter Taylor Swift, in support of her sixth studio album, Reputation (2017). The tour began on May 8, 2018, in Glendale and concluded on November 21, 2018, in Tokyo, comprising 53 concerts. The tour received 2,888,892 attendees and grossed $345.7 million in revenue, becoming Swift's most successful tour to-date, the third highest grossing female concert tour of all time, and the highest grossing concert tour in United States and North American history.

The Bandito Tour is the sixth concert tour by the American musical duo Twenty One Pilots, in support of their fifth studio album Trench (2018). The tour began at the Bridgestone Arena in Nashville, Tennessee on October 17, 2018 and will conclude at the VTB Arena in Moscow, Russia on July 12, 2020.