Last updated November 28, 2020
Digital transfer of music from an Internet-facing computer or website to a user's local desktop computer

A music download is the digital transfer of music via the Internet into a device capable of decoding and playing it, such as a personal computer, portable media player, MP3 player or smartphone. This term encompasses both legal downloads and downloads of copyrighted material without permission or legal payment. According to a Nielsen report, downloadable music accounted for 55.9% of all music sales in the US in 2012. [nb 1] [1] By the beginning of 2011, Apple's iTunes Store alone made US$1.1 billion of revenue in the first quarter of its fiscal year. [2] Music downloads are typically encoded with modified discrete cosine transform (MDCT) audio data compression, particularly the Advanced Audio Coding (AAC) format used by iTunes as well as the MP3 audio coding format. [3]

Paid downloads are sometimes encoded with digital rights management that restricts copying the music or playing purchased songs on certain digital audio players. They are almost always compressed using a lossy codec (usually MPEG-1 Layer 3, Windows Media, or AAC), which reduces file size and bandwidth requirements. These music resources have been created as a response to expanding technology and needs of customers who wanted easy, quick access to music. Their business models respond to the "download revolution" by making legal services attractive for users.

Even legal music downloads have faced a number of challenges from artists, record labels and the Recording Industry Association of America. In July 2007, the Universal Music Group decided not to renew their long-term contracts with iTunes. This decision was primarily based on the issue of pricing of songs, as Universal wanted to be able to charge more or less depending on the artist, a shift away from iTunes' standard—at the time—99 cents per song pricing. Many industry leaders feel that this is only the first of many show-downs between Apple Inc. and the various record labels. [4]

According to research by the website TorrentFreak, 38% of Swedish artists support file share downloading and claim that it helps artists in early career stages. Artists, including Swedish rock group Lamont, have profited from file sharing. [5]

The Recording Industry Association of America (RIAA) oversees about 85% of published music production, distribution and manufacturing in the United States. They work to protect musicians while supporting the First Amendment rights. Their stated goal is to support artists' creativity and help them not be cheated out of money by illegal downloading. [6] The Recording Industry Association of America launched its first lawsuits on 8 September 2003, against individuals who illegally downloaded music files from the Kazaa FastTrack network.

Two years after it began, the campaign survived at least one major legal challenge.[ citation needed ] The RIAA said it filed 750 suits in February 2006 [7] against individuals downloading music files without paying for them in hopes of putting an end to Internet music piracy. The RIAA hopes their campaign will force people to respect the copyrights of music labels and eventually minimize the number of illegal downloads. [8]

The Official Charts Company began to incorporate downloads in the UK Singles Chart on 17 April 2005, at which time Radio 1 stopped broadcasting the separate download chart,[ citation needed ] although the chart is still compiled. Initially this was on condition that the song must have a physical media release at the same time; this rule was fully lifted on 1 January 2007, meaning all download sales are now eligible in the chart.[ citation needed ]

Music downloads have been measured by the Official Charts Company since 2004 and included in the main UK Singles Chart from 2005. The most downloaded song in the UK is "Happy" by Pharrell Williams with over 1.8 million downloads. [9]

Soon after his death in 2009, Michael Jackson became the first artist to sell over one million songs downloaded via the Internet in one week. [13] However, Adele marks the most downloads sold by a single song in a week, with "Hello" selling 1.12 million copies in November 2015.

Beyoncé's self-titled fifth studio album became the fastest-selling album within 24 hours in iTunes history after its release in December 2013. Within 24 hours of availability, the album sold 430,000 digital copies. Adele's third studio album 25 became the fastest-selling album in a week in iTunes history after it was released on 20 November 2015. It sold 1.64 million digital copies in its first week (included preorders on the iTunes store since the release of the album's lead single "Hello" in October 2015).

In 2006, the Recording Industry Association of Japan began issuing certifications for digitally released music in Japan, compiling data from the early 2000s onwards. [15] The best-selling song is Fukushima-based vocal group Greeeen's song "Kiseki" (2008), which was certified for being legally downloaded four million times between 2008 and 2015, [16] followed by R&B singer Thelma Aoyama's "Soba ni Iru ne" (2008) featuring rapper SoulJa, which was certified for three million downloads between 2008 and 2014. [17] Greeeen's song "Ai Uta" (2007) ranks as the third highest certified song, with 2.5 million downloads tracked between 2007 and 2009. [18] [19] Two more songs have sold more than two million paid downloads: Ayaka's "Mikazuki" (2006) and Kobukuro's "Tsubomi" (2007). [20] The most successful ringtone in Japan is Moldovan-Romanian band O-Zone's "Dragostea din tei" (2003), known locally as "Koi no Maiahi" (恋のマイアヒ), which was certified as having four million units sold. [15]

In Japan, only two albums have received digital certifications by the RIAJ. The first was Songs for Japan (2011), a charity compilation album raising profits for the 2011 Tōhoku earthquake and tsunami, which was certified gold for 100,000 downloads in June 2011. [21] The second album was the Japanese language cast recording of the Frozen soundtrack, which sold 100,000 copies between its release in March 2014 and January 2015. [22] 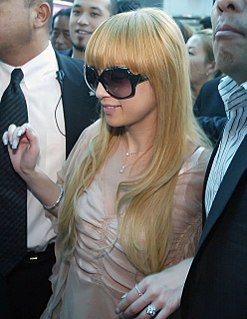 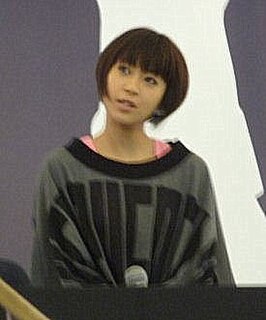 The discography of Mika Nakashima includes 11 studio albums, 7 compilation albums, 45 singles and 20 video albums. These have all been released through Sony Music Entertainment Japan. 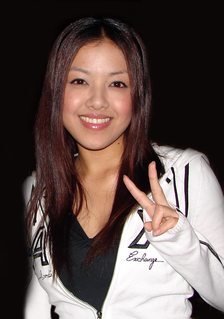 The discography of Japanese musician Yuna Ito consists of three studio albums, one compilation album and nineteen singles. Her debut album, Heart, was released in 2007 after six singles, including one of the two theme songs for the film Nana, "Endless Story" (2005), which also featured Ito in her acting debut, as well as "Precious" (2006), the theme song of the film Limit of Love: Umizaru. Both of these songs were very commercially successful, becoming certified Million by the RIAJ.

The discography of Ayaka consists of three studio albums, two compilation albums, a cover album and numerous singles, released through Warner between 2006 and 2009, and through Ayaka's independent label, A Station, from 2012 onwards.

The discography of Japanese contemporary R&B singer and Thelma Aoyama consists of four studio albums, six compilation albums, one extended play, one remix album, one cover album, two video albums and numerous solo and collaboration singles. Aoyama debuted as a musician in 2007 under Universal Music Japan, and became famous through her collaboration song with rapper SoulJa, "Koko ni Iru yo". Aoyama's version "Soba ni Iru ne" became one of the most successful songs of all time in Japan, certified for three million ringtone downloads and three million downloads by the RIAJ.

SoulJa is a Japanese hip-hop musician and songwriter best known for his collaborations with singer Thelma Aoyama, "Koko ni Iru yo" and "Soba ni Iru ne" – the latter of which was the former Guinness World Records holder for the best selling digital single of all-time in Japan.

Lil'B is a Japanese female pop duo, consisting of singer Mie and rapper Aila. They debuted in 2008 with "Orange," the 15th ending theme song for the anime Bleach. They are best known for their song "Kimi ni Utatta Love Song," which topped the RIAJ's monthly ringtone chart in 2008. They are also well known for their single "Tsunaida Te", which was the 3rd ending theme song for the anime Fullmetal Alchemist: Brotherhood. 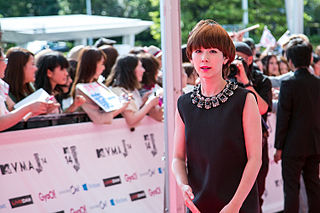 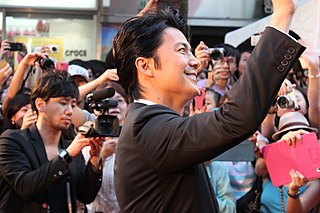 The discography of Verbal consists of 1 studio album released under Rhythm Zone, plus many featured singles and album tracks. Verbal is occasionally credited as L Universe, L12, Toss&Turn and The Funky President. 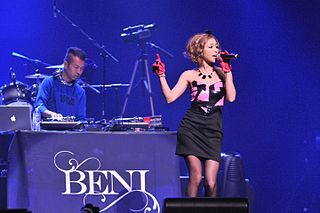 The discography of Japanese-American musician Beni consists of eight studio albums, two compilation albums, six live albums and three cover albums and twenty-six singles. Beni debuted in 2003 as a member of the Pony Canyon idol group Bishōjo Club 21 under the name Beni Arashiro, and in 2004 made her solo debut with Avex Trax.