YouTube Music is a free music streaming service developed by YouTube; it provides a tailored interface for the service oriented towards music streaming, allowing users to browse through songs and music videos on YouTube based on genres, playlists, and recommendations.

The YouTube Music app was unveiled in October 2015 and released the following month; its release came alongside the unveiling of YouTube Red, a larger subscription service that covers the entirety of the YouTube platform, including the Music app. Although redundant to Google's existing Google Play Music All Access subscription service, the app is designed for users who primarily consume music through YouTube. [4] [5]

On May 17, 2018, YouTube announced a new version of the YouTube Music service, including a web-based desktop player and redesigned mobile app, more dynamic recommendations based on various factors, and use of Google artificial intelligence technology to search songs based on lyrics and descriptions. In addition, YouTube Music became a separate subscription service (positioned as a more direct competitor to Apple Music and Spotify), offering ad-free and background/audio-only streaming, and downloading for offline playback, for music content on YouTube. The service's benefits will continue to be available as part of the existing YouTube Premium (formerly YouTube Red) service, and to Google Play Music All Access subscribers. The YouTube Music subscription is priced in line with its competitors at US$9.99 per-month; the price of YouTube Premium was concurrently increased to $11.99 for new subscribers. [6] [7]

The availability of music includes many of the releases from mainstream artists and extends to any video categorized as music on the YouTube service.

The free tier usually plays songs in its versions of music video where applicable. The premium tier plays official tracks of the album, unless the user searches for the music video version. YouTube Music Premium subscribers are able to switch to an audio-only mode that can play in the background while the application is not in use. The free tier does not allow audio-only mode with background playback as it displays video advertisements. [5]

The Premium and YouTube Premium plans are available in individual and family variants. A family plan allows up to six family members from the same household to access plan features. Eligible students can obtain a discount on an individual plan.

Spotify Technology S.A. is an international media services provider. It is legally domiciled in Luxembourg and is headquartered in Stockholm, Sweden. 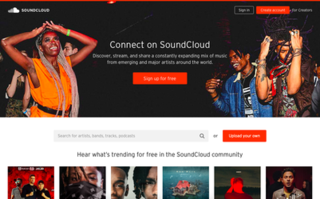 SoundCloud is a European online audio distribution platform and music sharing website based in Berlin, Germany that enables its users to upload, promote, and share audio. Started in 2007 by Alexander Ljung and Eric Wahlforss, SoundCloud has grown to be one of the largest music streaming services in the market reaching over 175 million monthly users worldwide. SoundCloud offers both free and paid membership on the platform, available for desktop or mobile device. SoundCloud has influenced the music industry through the success of many artists who have emerged from the music-sharing service. Artists on the platform are able to distribute their work for free that can be accessed by all users. SoundCloud has received support from many investors and other media platforms such as Twitter, although the streaming platform itself has dealt with funding issues and has laid off many employees in order to remain profitable.

Google Play, formerly Android Market, is a digital distribution service operated and developed by Google. It serves as the official app store for the Android operating system, allowing users to browse and download applications developed with the Android software development kit (SDK) and published through Google. Google Play also serves as a digital media store, offering music, books, movies, and television programs. It previously offered Google hardware devices for purchase until the introduction of a separate online hardware retailer, Google Store, on March 11, 2015, and it also offered news publications and magazines before the revamp of Google News on May 15, 2018.

This is a comparison of online music storage services, Internet services that allow uploads of personally owned or licensed music to the cloud for listening on multiple devices. 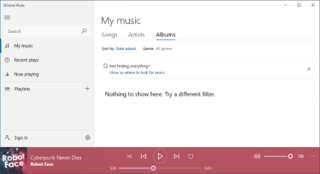 Groove Music is an audio player software included with Windows 8.0, Windows 8.1, and Windows 10.

Nexus Q is a digital media player developed by Google. Unveiled at the Google I/O developers' conference on June 27, 2012, the device was expected to be released to the public in the United States shortly thereafter for US$300. The Nexus Q was designed to leverage Google's online media offerings, such as Google Play Music, Google Play Movies & TV, and YouTube, to provide a "shared" experience. Users could stream content from the supported services to a connected television, or speakers connected to an integrated amplifier, using their Android device and the services' respective apps as a remote control for queueing content and controlling playback. 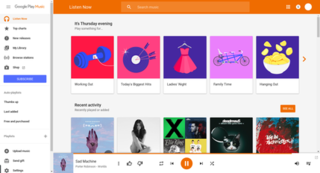 Google Play Music is a music and podcast streaming service and online music locker operated by Google, part of its Google Play line of services. The service was announced on May 10, 2011, and after a six-month, invitation-only beta period, it was publicly launched on November 16, 2011. 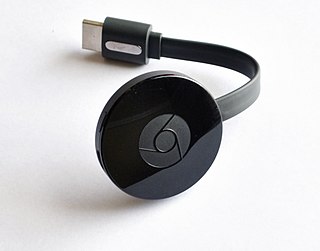 Chromecast is a line of digital media players developed by Google. The devices, designed as small dongles, enable users with a mobile device or personal computer to play Internet-streamed audio-visual content on a high-definition television or home audio system through mobile and web apps that support the Google Cast technology. Alternatively, content can be mirrored from the Google Chrome web browser running on a personal computer, as well as from the screen of some Android devices.

Google Mobile Services (GMS) are the apps by Google that often come pre-installed on Android devices. GMS is not a part of the Android Open Source Project (AOSP), which means an Android manufacturer needs to obtain a license from Google in order to legally pre-install GMS on an Android device. This license is provided by Google without any license fees. 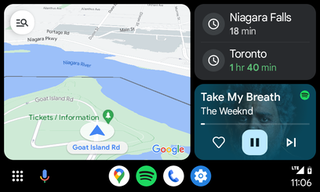 Android Auto is a mobile app developed by Google to mirror features from an Android device, such as a smartphone, to a car's compatible in-dash information and entertainment head unit.

YouTube Premium is a paid streaming subscription service that provides advertising-free streaming of all videos hosted by YouTube, exclusive original content produced in collaboration with the site's creators, access to audio-only versions of videos on the YouTube Music app, as well as offline playback and background playback of videos on mobile devices.

Google Home is a line of smart speakers developed by Google under the Google Nest brand. The devices enable users to speak voice commands to interact with services through Google Assistant, the company's virtual assistant. Both in-house and third-party services are integrated, allowing users to listen to music, control playback of videos or photos, or receive news updates entirely by voice. Google Nest devices also have integrated support for home automation, letting users control smart home appliances with their voice command. The first device, Google Home, was released in the United States in November 2016; subsequent product releases occurred globally from 2017–2019.

Android "Oreo" is the eighth major release and the 15th version of the Android mobile operating system. It was first released as an alpha quality developer preview in March 2017 and released to the public on August 21, 2017.