Much of the work of an entertainment law practice is transaction based, i.e., drafting contracts, negotiation and mediation. Some situations may lead to litigation or arbitration.

Entertainment law covers an area of law which involves media of all different types (TV, film, music, publishing, advertising, Internet & news media, etc.), and stretches over various legal fields, which include corporate, finance, intellectual property, publicity and privacy, and, in the United States, the First Amendment to the United States Constitution.

As the popularity of media became widespread, the field of media law became more popular and needed leaving certain corporate professionals wanting to participate more in media. As a result, many young lawyers fledged into media law which allowed them the opportunity to increase connections in media, and the opportunity to become a media presenter or an acting role if such an opportunity arose. As technology continues to make huge advancements, many lawsuits have begun to arise which makes the demand for lawyers extremely necessary.

Entertainment law is generally sub-divided into the following areas related to the types of activities that have their own specific trade unions, production techniques, rules, customs, case law, and negotiation strategies:

Media law is a legal field that refers to the following:

A chain of title is the sequence of historical transfers of title to a property. It is a valuable tool to identify and document past owners of a property and serves as a property's historical ownership timeline. The "chain" runs from the present owner back to the original owner of the property. In situations where documentation of ownership is important, it is often necessary to reconstruct the chain of title. To facilitate this, a record of title documents may be maintained by a registry office or civil law notary.

The following outline is provided as an overview of and topical guide to commercial law:

A cease and desist letter is a document sent to an individual or business to stop purportedly illegal activity ("cease") and not to restart it ("desist"). The letter may warn that if the recipient does not discontinue specified conduct, or take certain actions, by deadlines set in the letter, that party may be sued. When issued by a public authority, a cease and desist letter, being "a warning of impending judicial enforcement", is most appropriately called a "cease and desist order".

Intellectual property rights (IPRs) have been acknowledged and protected in China since the 1980s. China has acceded to the major international conventions on protection of rights to intellectual property. Domestically, protection of intellectual property law has also been established by government legislation, administrative regulations, and decrees in the areas of trademark, copyright, and patent. This has led to the creation of a comprehensive legal framework to protect both local and foreign intellectual property. Despite this, copyright violations are common in the PRC, The American Chamber of Commerce in China surveyed over 500 of its members doing business in China regarding IPR for its 2016 China Business Climate Survey Report, and found that IPR enforcement is improving, but significant challenges still remain. The results show that the laws in place exceed their actual enforcement, with patent protection receiving the highest approval rate, while protection of trade secrets lags far behind. Many US companies have claimed that the Chinese government has stolen their intellectual property sometime in 2009–2019. 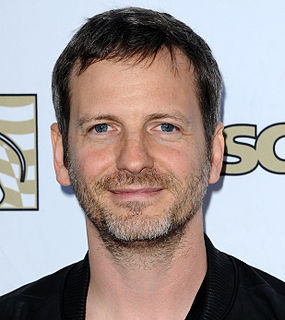 Lukasz Sebastian Gottwald, known professionally as Dr. Luke, is an American record producer, songwriter and singer. His professional music career began in the late night television sketch comedy Saturday Night Live as its house band's lead guitarist in 1997 and producing remixes for artists such as Bon Jovi and Gravediggaz. He came into music prominence in 2004 for producing Kelly Clarkson's single "Since U Been Gone" with Swedish record producer Max Martin.

Stan Lee Media (SLM) was an Internet-based creation, production and marketing company that was founded in 1998, filed for Chapter 11 bankruptcy protection in 2000, and ultimately dismissed from bankruptcy in November 2006. In its early years, the company created Stan Lee branded super hero franchises for applications in all media. Its 165-man animation production studio was based in Los Angeles from 1998–2001. It won the 2000 Web Award for the best Entertainment Portal on the World Wide Web, but the company failed in the same year and the corporate shell has been involved in numerous lawsuits in the years since. The company has been characterized as "a sleazy Internet start-up that could function as the poster child for the excesses of the turn-of-the-century era." Stan Lee himself cut ties with the company long before his death.

Sports law in the United States overlaps substantially with labor law, contract law, competition or antitrust law, and tort law. Issues like defamation and privacy rights are also integral aspects of sports law. This area of law was established as a separate and important entity only a few decades ago, coinciding with the rise of player-agents and increased media scrutiny of sports law topics.

Carole Enid Handler is an American lawyer who specializes in intellectual property litigation in the areas of trademark, copyright and antitrust laws, particularly those related to entertainment and media industry. She is commonly known as the "lawyer who saved Spiderman."

Sarah Beth Deutsch is an American attorney who was Vice President and Deputy General Counsel of the telecommunications company Verizon Communications until her retirement in 2015. Since leaving Verizon, she is a practicing attorney in the Washington, D.C. area handling copyright, trademark, privacy and internet policy issues.

Mark Avsec is an American rock keyboardist / songwriter / producer, and more recently copyright lawyer, who is best known for being a member of Wild Cherry, and also Donnie Iris & the Cruisers since 1979. Avsec co-founded this band, wrote or co-wrote all of the band's music, was its sole lyricist, and produced all of its albums. 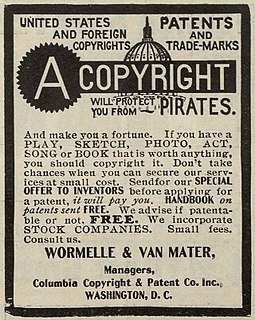 Greenberg & Lieberman is a national and international law firm based in Washington, D.C. Established in 1996 by Michael Greenberg and Stevan Lieberman, the firm is known for its expertise in the technology-law areas of intellectual property, trademark infringements, domain names, virtual worlds, and software and is among the 16 most influential entities in the field of domain names. A "boutique law firm", Greenberg & Lieberman credited for being among the first in the world to begin generating a significant revenue and client base via online virtual worlds such as Second Life. Greenberg & Lieberman are also noted for their involvement with media law and military law. 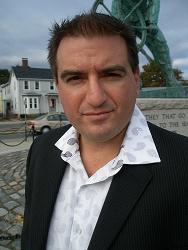 Marc J. Randazza is a First Amendment attorney, and a commentator on Infowars and CNN on legal matters.

Mark Alan Fischer was a Boston-based intellectual property and copyright lawyer, speaker, and co-author of the fourth edition of Perle, Williams & Fischer on Publishing Law with E. Gabriel Perle and John Taylor Williams. He was a partner at Duane Morris LLP. Fischer represented corporate and private clients with interests in entertainment law, copyright litigation, and social media law. He helped draft the Biobricks Foundation Public Agreement, which allows scientists to make their biotechnology tools available to the public.

Ira P. Rothken is an American high technology attorney and computer scientist who has handled numerous cases of first impression involving the internet and new technologies.

Kesha v. Dr. Luke refers to a series of lawsuits and countersuits between the singer Kesha and the music producer Dr. Luke. Kesha filed a civil suit against Dr. Luke in October 2014 for infliction of emotional distress, gender-based hate crimes and employment discrimination. Dr. Luke filed a lawsuit in New York Supreme Court in which he sued Kesha and her mother, Rosemary Patricia "Pebe" Sebert, for defamation and breach of contract.

Jeffrey E. Jacobson. Jacobson is a member of the Bars of the State of New York and District of Columbia. He is a notable lawyer within the entertainment and intellectual property fields.