Election law is a branch of public law that relates to the democratic processes, election of representatives and office holders, and referendums, through the regulation of the electoral system, voting rights, ballot access, election management bodies, election campaign, the division of the territory into electoral zones, the procedures for the registration of voters and candidacies, its financing and propaganda, voting, counting of votes, scrutiny, electoral disputes, electoral observation and all contentious matters derived from them. It is a discipline falling at the juncture of constitutional law and political science, and involves "the politics of law and the law of politics". [1]

History and the field

According to the Routledge Handbook of Election Law, election law is a growing area globally. [13] [14] [15] Voters around the world are increasingly challenging election results. Austria, Switzerland, Slovenia, Iceland, Kenya, and Malawi are some countries where courts have recently invalidated national elections or referendums. [16] Electoral disputes are good for democracy, according to the book's editors. [13] They can "remove voters' doubts, remedy violations, increase trust, and, when needed, invalidate flawed elections and defend the integrity of the electoral process. Letting all participants know violations will not be tolerated benefits future elections." [16]

Some of the questions that are addressed by election law are:

The French electoral code addresses most of the elections. However, other texts frame this material for special elections. Thus the Constitution but fixed some general basic provisions concerning the presidential election, the legislative and senatorial elections.

For litigation election, the court depends on the concerned election. The Constitutional Council is responsible for the most important elections: presidential elections and senatorial elections or referendums. In contrast, to the municipal or district elections the administrative tribunal has jurisdiction, then the appeal is to the State Council. Finally, for the regional and European elections, the Council of State which has jurisdiction at first and last resort.

In decisions on electoral matters, the law takes into account the results: if an essential principle is violated, the election is canceled but if fraud is "classic" (ballot stuffing, failure to register as voters, vote the dead ...) but the election was won (after counting of ballots invalidated) with a large or very large lead, the judge then cancels rarely the result. [17]

The Italian Constitution fixes some general basic provisions concerning the legislative elections. Electoral disputes in Italy are complex because they are divided between several court orders. For example, with regard to the dispute concerning registration of candidates for ballots or litigation election, the administrative court has jurisdiction. For eligibility and disfranchisement, the judge is the ordinary tribunal. [18]

If a fraud is proven by the judge, it does not cancel necessarily the elections, [19] unless they think that the result of election without the fraud would not have been identical. The survival of the acts already performed by the elected organs would seem solved by abundant case law that protects innocent trust of third parties. [20]

Elections in Mexico are held every 6 years to elect a president and every 3 years to elect a legislature. These elections determine who, on the national level, takes the position of the head of state – the president – as well as the legislature. At the local level, each of Mexico's 31 constituent states elects a governor to serve a six-year term; they also elect legislative deputies who sit in state congresses, and municipal presidents (presidentes municipales, or mayors). Mexico City, the national capital, elects a head of government in lieu of a mayor, city assemblymen in lieu of state congressional deputies, and borough mayors in lieu of municipal mayors.

Main article: Elections in the Philippines

Synchronized with the national elections are the local elections. The voter may vote for any of the following:

If the city the voter is residing in a highly urbanized city, or independent component city. or in Pateros, the voter can not vote for any of the provincial-level positions.

Main article: Election law of the Republic of the Congo

Elections in the United States are held for government officials at the federal, state, and local levels. At the federal level, the nation's head of state, the president, is elected indirectly by the people of each state, through an Electoral College. Today, these electors almost always vote with the popular vote of their state. All members of the federal legislature, the Congress, are directly elected by the people of each state. There are many elected offices at state level, each state having at least an elective governor and legislature. There are also elected offices at the local level, in counties, cities, towns, townships, boroughs, and villages; as well as for special districts and school districts which may transcend county and municipal boundaries.

In the United Kingdom, election law is legislated for by The Houses of Parliament. The statutory governance of UK Election law comes from acts of parliament such as the Fixed-term Parliaments Act 2011. The Electoral Commission's mandate and establishment was set out in the Political Parties, Elections and Referendums Act 2000 (PPERA), and ranges from the regulation of political donations and expenditure by political and third parties through to promoting greater participation in the electoral process.

The Electoral Administration Act 2006 made a number of improvements to electoral registration, improving the security arrangements for absent voting, allowing observers to attend elections and a major change in reducing the minimum age for candidates at UK parliamentary elections. It also introduced the performance standards regime for electoral services. 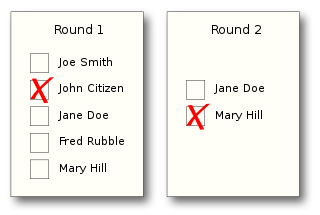 The two-round system (TRS), also known as runoff voting, second ballot, or ballotage, is a voting method used to elect a single candidate, where voters cast a single vote for their preferred candidate. It generally ensures a majoritarian result, not a simple plurality result as under First past the post. Under the two-round election system, the election process usually proceeds to a second round only if in the first round no candidate received a simple majority of votes cast, or some other lower prescribed percentage. Under the two-round system, usually only the two candidates who received the most votes in the first round, or only those candidates who received above a prescribed proportion of the votes, are candidates in the second round. Other candidate are excluded from the second round.

Disfranchisement, also called disenfranchisement, or voter disqualification is the restriction of suffrage of a person or group of people, or a practice that has the effect of preventing a person exercising the right to vote. Disfranchisement can also refer to the revocation of power or control of a particular individual, community or being to the natural amenity they have; that is to deprive of a franchise, of a legal right, of some privilege or inherent immunity. Disfranchisement may be accomplished explicitly by law or implicitly through requirements applied in a discriminatory fashion, through intimidation, or by placing unreasonable requirements on voters for registration or voting.

A referendum, in the Italian legal system is a request directed to the whole electorate to express their view on a determined question. It is the main instrument of direct democracy in Italy. 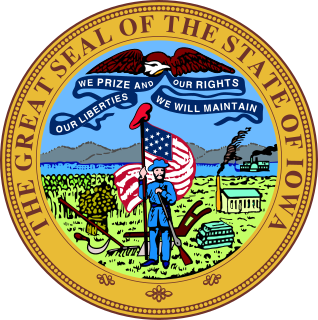 The number of elections in Iowa varies from year to year. Presidential elections are held every four years.

In Catholic canon law, Right of Option is a way of obtaining a benefice or a title, by the choice of the new titulary himself.

Ex tunc is a legal term derived from Latin, and means "from the outset". It can be contrasted with ex nunc, which means "from now on". An example of usage of the term can be found in contract law, where voidance of a contract can lead to it either being void ex nunc, i.e. from then on, or ex tunc, in which case it is treated as though it had never come into existence. 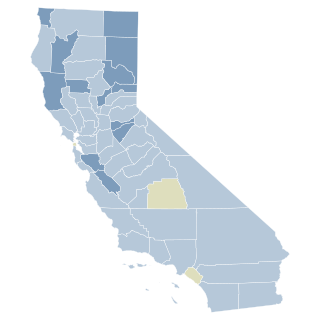 Proposition 14 is a California ballot proposition that appeared on the ballot during the June 2010 state elections. It was a constitutional amendment that effectively transformed California's non-presidential elections from first-past-the-post to a nonpartisan blanket primary. The proposition was legislatively referred to voters by the State Legislature and approved by 54% of the voters. It consolidated all primary elections for a particular office into an election with one ballot that would be identical to all voters, regardless of their party preferences. The two candidates with the most votes in the primary election would then be the only candidates who would run in the general election, regardless of their party affiliation.

The 2010 Italian local elections were held on different dates; most on 29–30 March concurrently with the Regional elections. 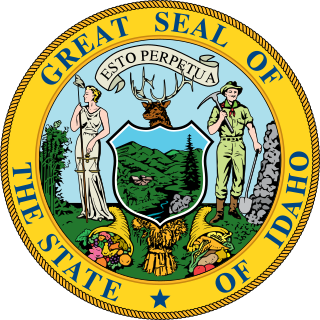 Some type of election in Idaho occurs annually in each of the state's cities and towns, the exact type of which is dependent on the year. Elections for federal and statewide offices occur in even-numbered years, while municipal elections occur in odd-numbered years. 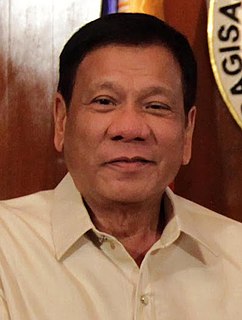 A general election in the Philippines took place on May 9, 2016, for executive and legislative branches for all levels of government – national, provincial, and local, except for the barangay officials. 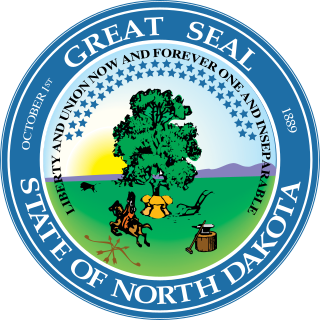 Statewide elections in the U.S. state of North Dakota take place every two years. Most executive offices and all legislators are elected to four-year terms, with half the terms expiring on U.S. Presidential election years, and the other half expiring on mid-term election years. 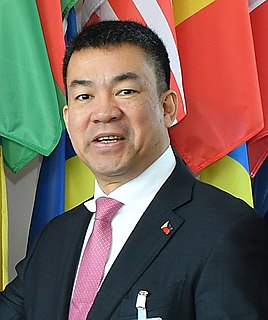 The 2019 Philippine general election was conducted on May 13, 2019. A midterm election, those elected therein will take office on June 30, 2019, midway through the term of President Rodrigo Duterte. 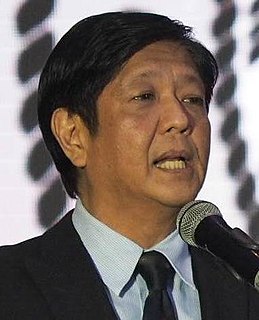 The 2022 Philippine general election took place on May 9, 2022, for executive and legislative branches of the government – national, provincial, and local, except for the barangay officials.