In many parts of the world, local elections take place to select office-holders in local government, such as mayors and councillors. Elections to positions within a city or town are often known as "municipal elections". Their form and conduct vary widely across jurisdictions.

Adopted by the Congress of the Council of Europe, The European Charter of Local Self-Government aims to establish basic European rules in order to measure and safeguard the rights of local authorities. The Charter commits the parties to applying basic rules guaranteeing the political, administrative and financial independence of local authorities. The Congress conducts two main activities so as to evaluate the Charter's implementation: local and regional election monitoring and observation. The Congress regularly observes local and/or regional elections in member and applicant countries, which allows the Council to monitor the state of local and regional democracy in the countries concerned. With regards to its monitoring mission, the Congress prepares monitoring reports.

In Saudi Arabia and Kuwait, local elections have proven to be easier to achieve than larger scale ones that affect the national or federal government. By giving voice to people on the smaller scales of government, over such issues as water supply, power, and sewer systems, confidence is thought to be built to eventually reform higher levels of government.

In more mature developed nations there is always an effort to get more information about candidates and options to people, and to keep the influence of larger national bodies like a political party to a minimum, as its ideological agenda is not typically that of any locality:

In the United Kingdom the term local elections refers to county, unitary authority, borough, district, city, town and parish elections. These take place on the first Thursday of May every year. Councillors generally sit for four years. The number of independent (non-party) Councillors has declined over the past forty years - nowadays the overwhelming majority of local Councillors belong to one of the major parties.

In the United States there is an increasing demand for electoral reform, including a call for instant-runoff voting to be used to select all major executives. This is thought to make it possible for small parties to compete, as in the case of Matt Gonzalez in San Francisco, California. Such a ballot reform is often a complement to moving towards a "strong mayor" system, such as in Baltimore, Maryland, or as recently advocated in Oakland, California.

Residents of Takoma Park, Maryland can vote in municipal elections when they turn sixteen - the first in the United States. [1]

The Greens – The Green Alternative is a green political party in Austria. 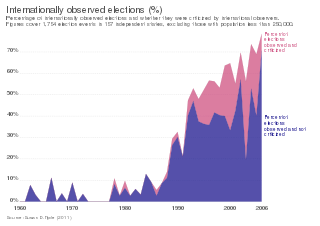 Election monitoring involves the observation of an election by one or more independent parties, typically from another country or from a non-governmental organization (NGO). The monitoring parties aim primarily to assess the conduct of an election process on the basis of national legislation and of international election standards. There are national and international election observers. Monitors do not directly prevent electoral fraud, but rather record and report instances of suspicious practices. Election observation increasingly looks at the entire electoral process over a long period of time, rather than at election-day proceedings only. The legitimacy of an election can be affected by the criticism of monitors, unless they are themselves seen as biased. A notable individual is often appointed honorary leader of a monitoring organization in an effort to enhance legitimacy of the monitoring process.

Municipal elections in Barcelona are held every four years to elect the city council. The mayor is elected indirectly by the councillors on the first plenary session of the term.

Christopher Newbury is a British Conservative politician. He was a member of the Congress of the Council of Europe from 1998 to 2010 and since 2009 has been a member of the new Wiltshire Council, created that year. 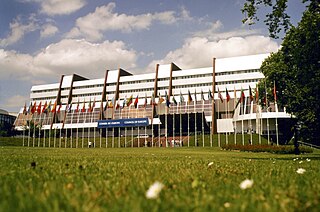 The Congress of Local and Regional Authorities is the pan-European political assembly representing local and regional authorities from the forty-six member states of the Council of Europe. Its role is to promote local and regional democracy, improve local and regional governance and strengthen authorities' self-government, according to the principles laid down in the European Charter of Local Self-Government. It is made up of two chambers, the Chamber of Local Authorities and the Chamber of Regions and holds its plenary sessions twice a year at the Palace of Europe in Strasbourg, where its permanent Secretariat is located. 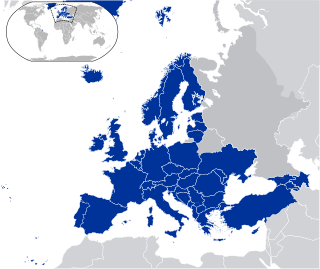 The Chamber of Local Authorities is one of the two Chambers of the Congress of Local and Regional Authorities of the Council of Europe. The Chamber is the voice of local authorities in the Council of Europe. It consists of 306 representatives from the Council's 46 member states, who either hold a general local authority mandate from direct elections or are politically accountable to a directly elected assembly. The Chamber provides an opportunity for local officials to discuss common concerns, share their experiences and develop relevant policies. 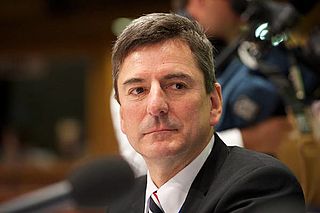 The Local Government Reform Act 2014 is an act of the Oireachtas which provided for a major restructuring of local government in the Republic of Ireland with effect from the 2014 local elections. It merged some first-tier county and city councils, abolished all second-tier town and borough councils, and created a new second tier of municipal districts covering rural as well as urban areas. It also provided for a plebiscite on whether to create a directly elected executive Mayor of the Dublin Metropolitan Area although this provision was not activated. The act was introduced as a bill on 15 October 2013 by Phil Hogan, the Minister for the Environment, Community and Local Government, and signed into law on 27 January 2014 by President Michael D. Higgins. Most of its provisions came into force on 1 June 2014.

Local government in Spain refers to the government and administration of what the Constitution calls "local entities", which are primarily municipalities, but also groups of municipalities including provinces, metropolitan areas, comarcas and mancomunidades and sub-municipal groups known as minor local entities. 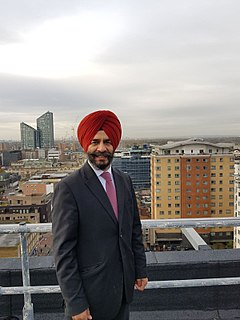