Apart from general elections and by-elections, midterm election refers to a type of election where the people can elect their representatives and other subnational officeholders (e.g. governor, members of local council) in the middle of the term of the executive. This is usually used to describe elections to a governmental body (generally a legislature) that are staggered so that the number of offices of that body would not be up for election at the same time. Only a fraction of a body seats are up for election while others are not until the terms of the next set of members are to expire. The legislators may have the same or longer fixed term of office as the executive, which facilitates an election midterm of the tenure of the higher office.

In the United States, the president and vice president are elected every four years in indirect (electoral college) presidential elections. The legislative bodies of the United States are the Senate (which serves six-year terms) and House of Representatives (two year-terms). The Senate has one third of its members up for election every two years while the House has all its membership up for election every two years. Regarding elections to the United States Congress, the point of reference is the president's term. There are three classes of United States senators; each election replaces one class, hence a "midterm election" appears as one third through the term of one class and two thirds through the other, while still midway the term of a president. In addition to federal legislative bodies, governors of 36 states and three territories are also up for election during a midterm election.

Meanwhile, although the Philippines and Liberia also conduct midterm elections, not all seats in the legislative bodies with elections are contested in a single cycle. This means the winners of such elections take office in their respective legislative bodies that conduct such elections midway through the term of half of the other members, hence for the members who were not up for election, the incoming members take office midway through their terms. This is especially the case in the Philippine Senate, when there are elections every three years to fill half of the 24 seats for a six-year term.

Conversely, in Cyprus, while the House of Representatives is elected for a fixed term of five years, and renewed entirely in each election, House elections are scheduled to be held in the middle of the President's own five-year term.

The results of such a midterm election serve as a measuring stick to the popularity of the incumbent executive, although in the United States the governing party has suffered election defeats for most of the time. In European countries where parliamentary systems of government are prevalent, midterms do not always exist in the strictest sense. In such a case, although local, regional, and European Parliamentary elections are often considered a proxy measuring stick for how popular the governing party is outside of a national parliamentary election year, they are not necessarily held at the exact midpoint between scheduled national parliamentary or presidential elections.

A Member of Congress (MOC) is a person who has been appointed or elected and inducted into an official body called a congress, typically to represent a particular constituency in a legislature. The term member of parliament (MP) is an equivalent term in other, unaffiliated jurisdictions.

The 100 seats in the United States Senate are divided into three classes for the purpose of determining which seats will be up for election in any two-year cycle, with only one class being up for election at a time. With senators being elected to fixed terms of six years, the classes allow about a third of the seats to be up for election in any presidential or midterm election year instead of having all 100 be up for election at the same time every six years. The seats are also divided in such a way that any given state's two senators are in different classes so that each seat's term ends in different years. Class 1 and 2 consist of 33 seats each, while class 3 consists of 34 seats. Elections for class 1 seats took place in 2018, class 2 in 2020, and the elections for class 3 seats will be held in 2022.

The Vermont General Assembly is the legislative body of the state of Vermont, in the United States. The Legislature is formally known as the "General Assembly," but the style of "Legislature" is commonly used, including by the body itself. The General Assembly is a bicameral legislature, consisting of the 150-member Vermont House of Representatives and the 30-member Vermont Senate. Members of the House are elected by single and two-member districts. 58 districts choose one member, and 46 choose two, with the term of service being two years. The Senate includes 30 Senators, elected by eight single-member and nine multi-member districts with two or three members each. It is the only state legislative body in the United States in which a third-party has had continuous representation and been consecutively elected alongside Democrats and Republicans.

A fixed-term election is an election that occurs on a set date, and cannot be changed by incumbent politicians other than through exceptional mechanisms if at all. 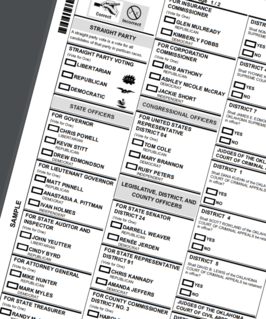