In the field of recorded music, a hidden track (sometimes called a secret track) is a song that has been placed on a CD, audio cassette, LP record or other recorded medium in such a way as to avoid detection by the casual listener. In some cases, the piece of music may simply have been left off the track listing, while in other cases more elaborate methods are used. In rare cases a "hidden track" is actually the result of an error that occurred during the mastering stage of the record's production.[ citation needed ]

A vinyl record may be double-grooved, with the second groove containing the hidden tracks. Examples of double-grooving include Monty Python's "three-sided" Matching Tie and Handkerchief , Tool's Opiate EP [1] and Mr. Bungle's Disco Volante .

On indexed media such as compact discs, double-grooving cannot be used, but there are additional methods of hiding tracks, such as:

It is occasionally unclear whether a piece of music is "hidden." For example, "Her Majesty", which is preceded by fourteen seconds of silence, was originally unlisted on The Beatles' Abbey Road but is listed on current versions of the album. [8] This is one of the first instances of a hidden track. The song snippet at the end of Sgt. Pepper's Lonely Hearts Club Band is considered by some to be a hidden track, by others to be noise not worthy of such a designation, and by others to be part of "A Day in the Life". [9] 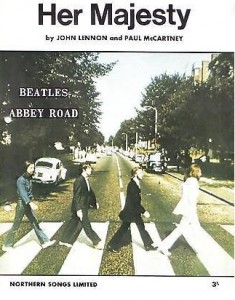 "Her Majesty" is a song by the English rock band the Beatles from their 1969 album Abbey Road. Written by Paul McCartney and credited to Lennon–McCartney, it is a brief tongue-in-cheek music hall song. Although credited to the band, McCartney is the only Beatle to appear on the track. "Her Majesty" is the final cut on the album and appears 14 seconds after the previous song "The End," but was not listed on the original sleeve. As such, it is considered one of the first examples of a hidden track in rock music. The song is a music hall style number reminiscent of George Formby.