Enhanced CD is a certification mark of the Recording Industry Association of America for various technologies that combine audio and computer data for use in both Compact Disc and CD-ROM players. [1]

The technology was popular in the late 1990s with the increase of computer usage. Music CDs often included music videos, wallpapers, and other various content. However, more recently, acts wishing to include enhanced content often include a DVD instead, with the disadvantage of it not playing in a CD audio player, but with the advantage of storing greater amounts of data and/or higher-quality video.

Sometimes computer CD-ripping programs (particularly cdparanoia and CDBurnerXP) have problems ripping some enhanced CDs, especially those that have the data in a separate section after the audio section. These CDs have the data 11,400 sectors (2m32s) after the audio, but some CD rippers may try to rip this blank section with the last track; the end result is that the ripper stalls during the last track or simply reports errors.

Compact Disc Digital Audio, also known as Audio CD, is the standard format for audio compact discs. The standard is defined in the Red Book, one of a series of Rainbow Books that contain the technical specifications for all CD formats.

A DVD player is a device that plays DVDs produced under both the DVD-Video and DVD-Audio technical standards, two different and incompatible standards. Some DVD players will also play audio CDs. DVD players are connected to a television to watch the DVD content, which could be a movie, a recorded TV show, or other content.

Copy protection, also known as content protection, copy prevention and copy restriction, is any effort designed to prevent the reproduction of software, films, music, and other media, usually for copyright reasons. Various methods have been devised to prevent reproduction so that companies will gain benefit from each person who obtains an authorized copy of their product. Unauthorized copying and distribution accounted for $2.4 billion in lost revenue in the United States alone in the 1990s, and is assumed to be causing impact on revenues in the music and the video game industry, leading to proposal of stricter copyright laws such as PIPA. Some methods of copy protection have also led to criticisms because it caused inconvenience for honest consumers, or it secretly installed additional or unwanted software to detect copying activities on the consumer's computer. Making copy protection effective while protecting consumer rights is still an ongoing problem with media publication. 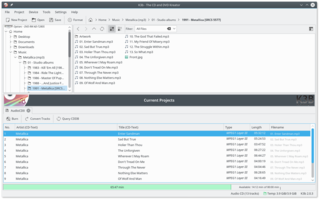 K3b is a CD and DVD authoring application by KDE for Unix-like computer operating systems. It provides a graphical user interface to perform most CD/DVD burning tasks like creating an Audio CD from a set of audio files or copying a CD/DVD, as well as more advanced tasks such as burning eMoviX CD/DVDs. It can also perform direct disc-to-disc copies. The program has many default settings which can be customized by more experienced users. The actual disc recording in K3b is done by the command line utilities cdrecord or cdrkit, cdrdao, and growisofs. As of version 1.0, K3b features a built-in DVD ripper.

Ripping is extracting all or parts of digital contents from a container. Originally it meant to rip music out of Amiga games. Later the term was used to extract WAV or MP3 format files from digital audioCDs, but got applied as well to extract the contents of any media, most notably DVD and Blu-ray discs.

GD-ROM is a proprietary optical disc format originally used for the Dreamcast video game console, as well as its arcade counterpart, the Sega NAOMI and select Triforce arcade board titles. It was developed by Yamaha to curb piracy common to standard compact discs and to offer increased storage capacity without the expense of the fledgling DVD-ROM. It is similar to the standard CD-ROM except that the pits on the disc are packed more closely together, resulting in a higher storage capacity of 1 gigabyte, a 42% increase over a conventional CD's capacity of 700 megabytes.

CD/DVD copy protection is a blanket term for various methods of copy protection for CDs and DVDs. Such methods include DRM, CD-checks, Dummy Files, illegal tables of contents, over-sizing or over-burning the CD, physical errors and bad sectors. Many protection schemes rely on breaking compliance with CD and DVD standards, leading to playback problems on some devices.

A cue sheet, or cue file, is a metadata file which describes how the tracks of a CD or DVD are laid out. Cue sheets are stored as plain text files and commonly have a .cue filename extension. CDRWIN first introduced cue sheets, which are now supported by many optical disc authoring applications and media players.

key2audio is a copy restriction system for Audio CDs, developed by Sony DADC. The system gained notoriety after it was discovered that one can effectively disable the system by tracing the outer edge of a CD with a felt-tip marker.

Cactus Data Shield (CDS) is a form of CD/DVD copy protection for audio compact discs developed by Israeli company Midbar Technologies. It has been used extensively by EMI and BMG and their subsidiaries. CDS relies on basically two components: Erroneous Disc Navigation and Data Corruption.

A mixed mode CD is a Compact Disc which contains both data and audio in one session. Typically the first track is a data track while the rest are audio tracks. The most common use for mixed mode CDs is to add CD-quality audio to video games on a CD.

The Blue Book is a compact disc standard developed in 1995 by Philips and Sony. It defines the Enhanced Music CD format, which combines audio tracks and data tracks on the same disc. The format was created as a way to solve the problem of mixed mode CDs, which were not properly supported by many CD players. The standard is not freely available and must be licensed from Philips.

A compressed audio optical disc, MP3 CD, or MP3 CD-ROM or MP3 DVD is an optical disc that contains digital audio in the MP3 file format. Discs are written in the "Yellow Book" standard data format, as opposed to the Red Book standard audio format.

Opendisc is an Enhanced Music CD application for enabling multimedia content when a compact disc is played on a personal computer. Opendisc asserts that its technology conforms to the Blue Book specification and does not contain copy-protection functions. However, various computer users have reported that it interferes with third-party playback and ripping applications, effectively functioning as Digital Rights Management. Since version 2.0, Opendisc embedded a direct link to a default audio player such as Windows Media Player or iTunes. Because of this, many CDs now simply feature access to a Web site of the specific artist, which features exclusive music, videos, and photo content. Like a Google alert, a user is informed of artist updates via e-mail.