A music festival is a community event oriented towards live performances of singing and instrument playing that is often presented with a theme such as musical genre (e.g., blues, folk, jazz, classical music), nationality, locality of musicians, or holiday.

They are commonly held outdoors, with tents or roofed temporary stages for the performers. Often music festivals host other attractions such as food and merchandise vending, dance, crafts, performance art, and social or cultural activities. At music festivals associated with charitable causes, there may be information about social or political issues. Many festivals are annual, or repeat at some other interval. Some, including many rock festivals, are held only once.

Some festivals are organized as for-profit concerts and others are benefits for a specific charitable cause. [1] Another type of music festival is the educative type, organized annually in local communities, regionally, or nationally, for the benefit of amateur musicians of all ages and grades of achievement.

The Pythian Games at Delphi included musical performances, and may be one of the earliest festivals known. [2] During the Middle Ages, festivals were often held as competitions.[ citation needed ]

Music festivals have developed as an emerging industry which contributes to many national economies. For example, Coachella Valley Music and Arts Festival earned $114.6 million in 2017. [3] Music festivals nowadays also can serve as a way of building a brand for a destination, creating a unique image for it and attracting visitors. [4]

There are many music festivals, some of which include many different genres, but some festivals specialize in one specific genre, such as EDM, metal, hip hop, among others.

There are also other types of festivals, such as jazz. An example of a jazz festival is the New Orleans Jazz and Heritage Festival.

While contemporary festivals are often represented as flourishing grounds for extraordinary experiences, [5] they increasingly serve as a way to create cultural identity, lifestyle, community, belonging and self-actualisation. [6] Furthermore, festivals are a manifestation for creating escapism [7] and a seasonal cultural economy to experience ritually and collectively. [8]

Another type of music festival is the music education, often organized annually in local communities, regionally, or nationally, for the benefit of amateur musicians of all ages and grades of achievement. [9] Entrants perform prepared pieces or songs in front of an audience which includes competitors, family and friends, and members of the community, along with one or more adjudicators or judges. These adjudicators, who may be music teachers, professors, or professional performers, provide verbal and written feedback to each performer or group. The adjudicator may be someone whom they might never meet in any other way, as is the case when an adjudicator from another city is brought in to judge. They also usually receive a certificate, classified according to merit or ranking, and some may win trophies or even scholarships. The most important aspect is that participants can learn from one another rather than compete. Such festivals aim to provide a friendly and supportive platform for musicians to share in the excitement of making music. For many, they provide a bridge from lessons and examinations to performing confidently in public; for a few of the top performers, they provide a pathway to further professional study of music in a college, university or conservatory.

Festivals around the world

Milwaukee, Wisconsin's 11-day event, Summerfest, promotes itself as "The World's Largest Music Festival." Operating annually since 1968, the festival attracts between 800,000 and 1,000,000 people each year, and hosts over 800 musical acts. [10] The Woodstock Festival in 1969 drew nearly 500,000 attendees, and the Polish spin-off Przystanek Woodstock in 2014 drew 750,000 [11] thus becoming the largest open air annual festival in Europe and the second largest in the world. In comparison, the Roskilde Festival in Denmark, attracts about 135,000 spectators each year. [12] Glastonbury Festival has a capacity of about 275,000 spectators, but has "fallow years" roughly every five years, so it is the biggest non-annual greenfield festival in the world. The oldest annual dedicated pop music festival in the world is Pinkpop Festival in the Netherlands, [13] though in other genres, there are much older ones: the Three Choirs Festival in the UK has run annually [14] since 1719. The Queensland Music Festival, established in 1999 and headquartered in Brisbane Australia, is the largest music festival by land mass, as a state-wide music biennial music festival, over a three-week period during July.

Lists of music festivals in:

Lists of music festivals by genre 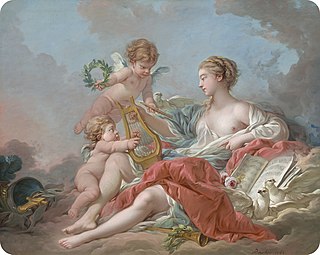 Music is the art of arranging sounds in time to produce a composition through the elements of melody, harmony, rhythm, and timbre. It is one of the universal cultural aspects of all human societies. General definitions of music include common elements such as pitch, rhythm, dynamics, and the sonic qualities of timbre and texture. Different styles or types of music may emphasize, de-emphasize or omit some of these elements. Music is performed with a vast range of instruments and vocal techniques ranging from singing to rapping; there are solely instrumental pieces, solely vocal pieces and pieces that combine singing and instruments. The word derives from Greek μουσική ; see § Etymology and glossary of musical terminology.

Jesus music, known as gospel beat music in the United Kingdom, is a style of Christian music that originated on the West Coast of the United States in the late 1960s and early 1970s. This musical genre developed in parallel to the Jesus movement. It outlasted the movement that spawned it and the Christian music industry began to eclipse it and absorb its musicians around 1975. 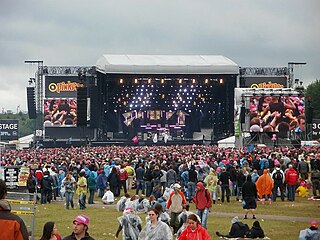 The Pinkpop Festival or PINKPOP is a large, annual music festival held at Landgraaf, Netherlands. It is usually held on the Pentecost weekend. If Pentecost falls on an early date in May, the festival is held later in June. Starting in 1970, at Burgemeester Damen Sportpark in the city of Geleen, Pinkpop is the oldest and longest running annual dedicated pop and rock music festival in the world. 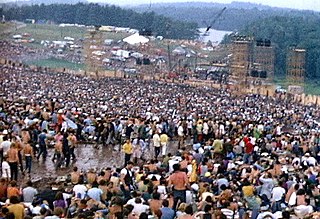 A rock festival is a series of musical performances by a variety of artists, which generally take place over a number of days. Some festivals are singular events, while others recur annually in the same location. Occasionally, a festival will focus on a particular genre, but many attempt to bring together a diverse lineup to showcase a broad array of popular music trends.

Music of Serbia represents the musical heritage of Serbia, both historical and modern. It has a variety of traditional music styles, which are part of the wider Balkan musical tradition, with its own distinctive sound and characteristics. 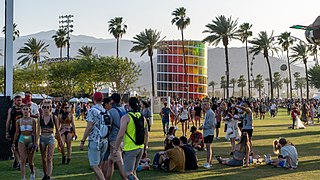 A cover band is a band that plays songs recorded by someone else, sometimes mimicking the original as accurately as possible, and sometimes re-interpreting or changing the original. These remade songs are known as cover songs. New or unknown bands often find the format marketable for smaller venues, such as pubs, clubs or parks. The bands also perform at private events, for example, weddings and birthday parties, and may be known as a wedding band, party band, function band or band-for-hire. A band whose covers consist mainly of songs that were chart hits is often called a top 40 band. Some bands, however, start as cover bands, then grow to perform original material. For example, The Rolling Stones released three albums consisting primarily of covers before recording one with their own original material.

Somerset is a county in the south-west of England. It is home to many types of music. 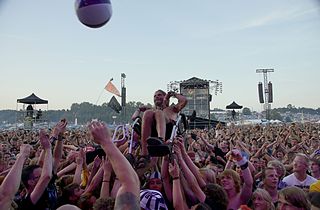 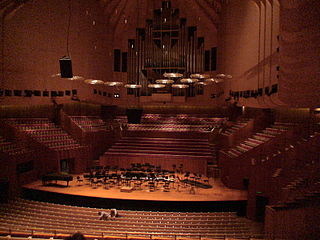 Generations In Jazz is an annual weekend jazz festival held in Mount Gambier, South Australia. It is held in May and brings together many young jazz musicians from all over Australia and New Zealand. 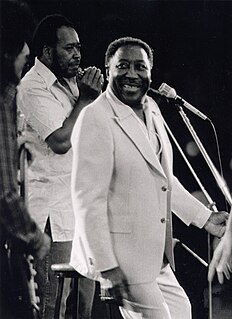 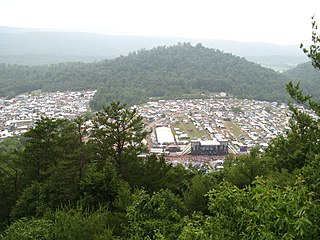 A Christian music festival is a music festival held by the Christian community, in support of performers of Christian music. The festivals are characterized by more than just music; many feature motivational speakers and evangelists, and include seminars on Christian spiritual and missions topics, service, and evangelism. They are often viewed as evangelical tools, and small festivals can draw 10 times the crowd of traditional revival meetings. While the central theme of a Christian festival is Jesus Christ, the core appeal of a Christian music festival remains the artists and their music. Critics point out that the dichotomy of business and religious interests can be problematic for Christian festivals. In similar ways as the Christian music industry in general, festivals can be drawn away from their central theme and gravitate toward commercialization and mainstream acts in an attempt to draw crowds.

New York State is a major center for all types of music. New York has been a famous melting pot of cultures from around the world. Its diverse community has contributed to both introducing and spreading multiple genres of music, including Salsa, Jazz, Folk, Rock and Roll, and Classical. New York's plethora of music venues and event halls serve as popular markers which have housed many noteworthy artists.

The history and development of jazz in Bulgaria was significantly influenced by the cultural and political changes in the country during the 20th century, which led to the emergence of a genre blending western jazz styles with Bulgarian folk music influences.