CTS Eventim AG & Co. KGaA is a German company in the leisure-events market, both ticketing and live entertainment, headquartered in Bremen. [1] Through subsidiaries such as Eventim UK, CTS Eventim provides ticketing services in numerous European countries. It is one of the 60 companies comprising the MDAX index, and one of the 30th to 90th largest companies in Germany by market capitalization.

CTS Eventim was founded in 1989 as Computer Ticket Service (CTS), by the concert promoter Marcel Avram. [2] The CEO is Klaus-Peter Schulenberg, who joined the company early on, and has been responsible for much of its growth. [2]

In November 2019, CTS Eventim's revenue exceeded €1 billion for the first time in a nine-month period, and the share price had risen 60% that year to reach a market capitalisation of €5.2 billion. [3]

Volkswagen AG, known internationally as the Volkswagen Group, is a German multinational automotive manufacturing company headquartered in Wolfsburg, Lower Saxony, Germany and indirectly majority owned by Austrian Porsche and Piëch families. It designs, manufactures and distributes passenger and commercial vehicles, motorcycles, engines, and turbomachinery and offers related services including financing, leasing and fleet management. In 2016, it was the world's largest automaker by sales, overtaking Toyota and keeping this title in 2017 and 2018, selling 10.8 million vehicles. It has maintained the largest market share in Europe for over two decades. It ranked seventh in the 2018 Fortune Global 500 list of the world's largest companies. Volkswagen Group sells passenger cars under the Audi, Bentley, Bugatti, Lamborghini, Porsche, SEAT, Škoda and the flagship Volkswagen marques; motorcycles under the Ducati brand; and TRATON under the marques MAN, Scania, and Volkswagen Commercial Vehicles. It is divided into two primary divisions, the Automotive Division and the Financial Services Division, and as of 2008 had approximately 342 subsidiary companies. Volkswagen also has two major joint-ventures in China. The company has operations in approximately 150 countries and operates 100 production facilities across 27 countries. 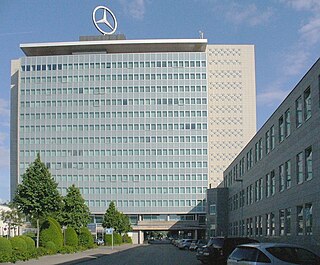 Daimler AG is a German multinational automotive corporation, headquartered in Stuttgart, Baden-Württemberg. Daimler-Benz was formed with the merger of Benz & Cie and Daimler Motoren Gesellschaft in 1926. The company was renamed DaimlerChrysler upon acquiring the American automobile manufacturer Chrysler Corporation in 1998, and was again renamed Daimler upon divesting of Chrysler in 2007.

Swisscom AG is a major telecommunications provider in Switzerland. Its headquarters are located in Worblaufen near Bern. The Swiss government owns 51.0 percent of Swisscom AG. According to its own published data, Swisscom holds a market share of 60% for mobile, 67% for broadband and 33% for TV telecommunication in Switzerland. Its Italian subsidiary Fastweb is attributed 16% of private clients and 29% of corporate clients share of Italian broadband and is also active in the mobile market. 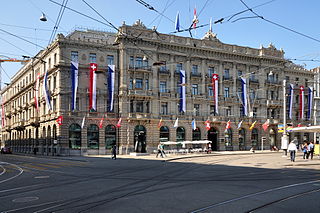 Credit Suisse Group AG is a Swiss multinational investment bank and financial services company founded and based in Switzerland. Headquartered in Zürich, it maintains offices in all major financial centers around the world and is one of the nine global "Bulge Bracket" banks providing services in investment banking, private banking, asset management, and shared services. Credit Suisse is known for its strict bank–client confidentiality and banking secrecy practices.

RWE AG, until 1990: Rheinisch-Westfälisches Elektrizitätswerk AG, is a German electric utilities company based in Essen, North Rhine-Westphalia. Through its various subsidiaries, the energy company supplies electricity and gas to more than 20 million electricity customers and 10 million gas customers, principally in Europe. RWE is the second largest electricity producer in Germany, and has increased renewable energy production in recent years.

Stage Entertainment is a live entertainment company founded by Dutch media tycoon and theatrical producer, Joop van den Ende. It is based in Amsterdam, Netherlands. Stage Entertainment is in business with offices and theatres in the Netherlands, Germany, Spain, the United Kingdom, the United States, Russia, France and Italy. The group produces musical shows in large theatres, consisting of licensed productions from international partners as well as original, in-company storyline.

Constantin Film AG is a German film production and film distribution company based in Munich. The company, which belongs to Highlight Communications AG, is a large independent German maker and distributor of productions in the entire field of audio-visual fiction and non-fiction. Company activity is based on the five pillars of film production/procurement of rights, TV production, film distribution, home entertainment and licence trading/TV exploitation. Constantin Film AG has released 36 of the 100 most successful German films of the last 20 years, including four of the Top 5: Manitou's Shoe, (T)raumschiff Surprise - Periode 1, Fack ju Göhte and Fack ju Göhte 2. The Fack ju Göhte trilogy was concluded in 2017 with Fack ju Göhte 3 and is now the most successful German film series of all time. Internationally, Constantin Film is best known for the successful Resident Evil film franchise, which has earned US$1.2 billion worldwide to date and is also known as the highest-grossing film series based on a video game. Most recent successes include TV series Shadowhunters, which won four People's Choice Awards in 2018. Constantin has also been involved in 20th Century Fox's Fantastic Four film franchise. Upcoming productions include bestseller adaption The Silence and Monster Hunter.

Songkick is an American technology company that provides concert discovery services and ticket sales for live music events. Songkick’s web and mobile app allows users to track touring artists, receive alerts for concerts in their area and purchase tickets to shows, using technology and services that run and manage ticket sales on behalf of artists.

MakeMyTrip Limited is an Indian online travel company founded in 2000. Headquartered in Gurugram, Haryana, the company provides online travel services including flight tickets, domestic and international holiday packages, hotel reservations, and rail and bus tickets. As of 31 March 2018, they have 14 company-owned travel stores in 14 cities, over 30 franchisee-owned travel stores in 28 cities, and counters in four major airports in India. MakeMyTrip has offices in New York, Singapore, Kuala Lumpur, Phuket, Bangkok, and Dubai. 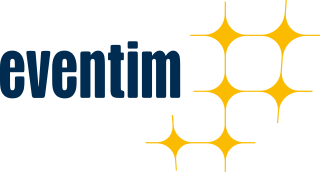 Eventim UK is an events and ticket agent, based in the UK. The company is a wholly owned subsidiary of Europe's largest ticket retailer, CTS Eventim AG & Co. KGaA.

Coresystems AG is a software-developing company, headquartered in Switzerland, and a reseller of SAP Business One and SAP Field Service Management solution.

Flixbus is a German brand that offers intercity bus service in Europe and the United States. It is owned by FlixMobility GmbH, which also operates FlixTrain and FlixCar.