Music Canada (formerly Canadian Recording Industry Association (CRIA)) is a non-profit trade organization that was founded 9 April 1963 to represent the interests of companies that record, manufacture, produce, and distribute music in Canada. It also offers benefits to some of Canada's leading independent record labels and distributors. [1]

In 2006, the CRIA was in the news when a number of smaller labels resigned their memberships, complaining that the organization wasn't representing their interests. [3] In 2011, it changed its name to Music Canada offering special benefits to some of the leading independent labels and distributors in Canada. [4]

Music Canada is governed by a board of directors who are elected annually by association members. To be eligible for election a candidate for the board must be among the executive officers of the member companies. Patrick Rogers (formerly the Vice President, Corporate Affairs) was named the new Chief Executive Officer, effective 11 January 2021. [5] Graham Henderson had been president from 15 November 2004 to 28 May 2020; Brian Robertson previously held the position from 1974.

Music Canada is responsible for the distribution of ISRC registrant codes within Canada, and also works with the IFPI and RIAA to try to prevent copyright infringement of artists' work.

Historically, Music Canada has represented all record labels in the country. Recently, however, some labels and other industry groups have publicly disagreed with Music Canada and claim it no longer represents them. In 2006, six well-known "indie" labels including Nettwerk left Music Canada in a dispute over Canadian content rules. They claimed the association was only protecting the interests of "the four major foreign multi-national labels," [7] referring to EMI, Universal, Sony BMG, and Warner. Other points of contention include Music Canada's stance against the blank media tax, their support for digital locks on music, [8] and positions against copyright reform. [9] In 2007 a group of musicians formed the Canadian Music Creators Coalition, claiming "legislative proposals that would facilitate lawsuits against our fans or increase the labels' control over the enjoyment of music are made not in our names, but on behalf of the labels' foreign parent companies."

On March 31, 2004, in the case of BMG v. John Doe , Justice Konrad von Finckenstein of the Federal Court of Canada ruled that making music available for download over the Internet was not equivalent to distribution and was thus noninfringing. The Justice compared the peer-to-peer filesharing activities to "having a photocopier in a library room full of copyrighted material" and wrote that there was no evidence of unauthorized distribution presented. [11] The Federal Court of Appeal upheld the lower courts ruling denying the disclosure of the customers' identities, but, in reference to "what would or would not constitute infringement of copyright," stated: "such conclusions should not have been made in the very preliminary stages of this action, since they would require a consideration of the evidence as well as the law applicable to such evidence after it has been properly adduced, and could be damaging to the parties if a trial takes place." [12] The Copyright Board of Canada earlier that year had included downloading music in the list of "private copying" activities for which tariffs on blank media applied. (Private copying is the act of copying music for personal use from a noninfringing source, and is itself noninfringing.) That made it extremely unlikely that downloaders could be successfully prosecuted, leaving only the possibility of acting against uploaders, those supplying the works to others on the networks. [ citation needed ] In 2008, the operators of the isoHunt website filed a motion with the Supreme Court of British Columbia seeking a declaratory judgment affirming the legality of their operation. The motion was denied, and the court ruled a full trial was needed. This decision was appealed by the operators of isoHunt; the appeal was also denied. In late 2009, isoHunt filed a formal suit against Music Canada and the four "major" record labels seeking "declaratory relief to clarify its legal rights." [13]

Additionally, in October 2008, the four main members of Music Canada were sued by the estate of Chet Baker and several other artists for copyright infringement. The major claims in this lawsuit are as follows:

As the standard punitive damages for each act of infringement is set at $20,000, and there are three hundred thousand works on the "pending lists", Music Canada could have faced punitive damages of a minimum of $6 billion. [14] On November 8, 2011, the suit was settled out of court for over $45 million. [15]

Prior to September 12, 2016, Music Canada had different certification levels for physical singles and Digital downloads singles. [17] On that date, the digital downloads singles award was discontinued and single awards include digital singles. It also includes streams, where 150 on-demand audio streams from a subscription service equals 1 unit towards certification. [16]

The International Federation of the Phonographic Industry (IFPI) is the organisation that represents the interests of the recording industry worldwide. It is a non-profit members' organisation registered in Switzerland and founded in Italy in 1933. It operates a secretariat based in London, with regional offices in Brussels, Hong Kong, Miami, Abu Dhabi and Nairobi.

In the United States, the Recording Industry Association of America (RIAA) awards certification based on the number of albums and singles sold through retail and other ancillary markets. Other countries have similar awards. Certification is not automatic; for an award to be made, the record label must first request certification. The audit is conducted against net shipments after returns, which includes albums sold directly to retailers and one-stops, direct-to-consumer sales and other outlets.

The Australian Recording Industry Association (ARIA) is a trade group representing the Australian recording industry which was established in the 1970s by six major record companies, EMI, Festival, CBS, RCA, WEA and Universal replacing the Association of Australian Record Manufacturers (AARM) which was formed in 1956. It oversees the collection, administration and distribution of music licenses and royalties.

The British Phonographic Industry (BPI) is the British recorded music industry's Trade association. It runs the BRIT Awards, the Classic BRIT Awards, National Album Day, is home to the Mercury Prize, and co-owns the Official Charts Company with the Entertainment Retailers Association, and awards UK music sales through the BRIT Certified Awards. 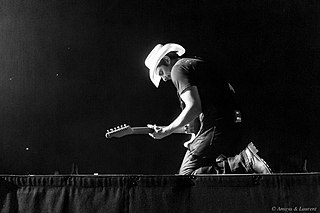 The discography of Brad Paisley, an American country music singer, consists of 12 studio albums, three compilation albums, and 46 singles. All but two of Paisley's singles have hit the Top 20 of the Billboard Hot Country Songs charts, with all but six reaching the Top Ten. He has 21 Number Ones, including a streak of ten consecutive, starting with the 2005–06 Dolly Parton duet "When I Get Where I'm Going". When "Waitin' on a Woman", reached number 1 in late 2008, Paisley set a new record for the most consecutive Number Ones (10) by any country artist since the inception of Nielsen SoundScan in 1990. This streak lasted until mid-2009's number 2 single "Welcome to the Future".

The Recording Industry Association of America (RIAA) is a trade organization that represents the recording industry in the United States. Its members consist of record labels and distributors that the RIAA says "create, manufacture, and/or distribute approximately 85% of all legally sold recorded music in the United States". RIAA is headquartered in Washington, D.C.

This is the discography of Canadian rap rock/alternative rock band, Down with Webster. The band has sold over 50,000 albums and 500,000 singles.

BMG Canada Inc. v. Doe, 2004 FC 488 aff'd 2005 FCA 193, is an important Canadian copyright law, file-sharing, and privacy case, where both the Federal Court of Canada and the Federal Court of Appeal refused to allow the Canadian Recording Industry Association (CRIA) and several major record labels to obtain the subscriber information of Internet service provider (ISP) customers alleged to have been infringing copyright.

Asosiasi Industri Rekaman Indonesia (ASIRI) is a trust that represents the recording industry interests in Indonesia.