Prior to June 2013 the association called itself the "Recording Industry Association of New Zealand" (RIANZ). RIANZ and PPNZ Music Licensing merged and renamed themselves "Recorded Music NZ". [1]

Recorded Music NZ also operates as a joint trustee (with APRA) of the New Zealand Music Hall of Fame.

The New Zealand Federation of Phonographic Industry (NZFPI) was established in 1957 to collectively represent copyright licensing on behalf of rights owners. It later changed its name to Phonographic Performances New Zealand (PPNZ), and then PPNZ Music Licensing. In 1972 a new trade body was established called Recording Industry Association of New Zealand (RIANZ) which carried out industry advocacy functions (such as Government representation), administration of the NZ Music Awards and, in 1975, production of The Official NZ Music Charts. For better administrational efficiency, the two companies were merged in 2013 and renamed to Recorded Music NZ. [3] [4]

The New Zealand Music Awards are conferred annually by Recorded Music NZ for outstanding artistic and technical achievements in the recording field. The awards are one of the biggest awards that a group or artist can receive in music in New Zealand. The awards have been presented every year since 1965.

An additional "Heatseekers" chart was first published on the chart dated 5 October 2015. The chart consisted of the top ten singles outside of (and that had not previously charted inside) the top forty, and had the same rules and criteria as the Top 40 Singles Chart. [6] Once a title made an appearance inside the top forty at any point, it became ineligible to appear on the Heatseekers chart. [7]

Following the discontinuation of the Heatseekers chart, in July 2018 Recorded Music NZ began publishing the Hot Singles Chart, [8] which tracks the "40 fastest-moving tracks by sales, streams and airplay". Songs can appear on both the NZ Top 40 and NZ Hot Singles charts simultaneously, [9] as the primary aim of the Hot Singles chart is to "reflect the songs achieving the greatest week-on-week growth". [10]

As RIANZ, Recorded Music NZ was instrumental in attempting to introduce a possible version of Section 92A Copyright Act. The amendment would have required ISPs in New Zealand to disconnect users accused but not convicted of downloading copyrighted material – the first law of its type in the world. [12] The amendment and consequently the RIANZ's actions have been widely criticized. ISPs described the law as "a deeply flawed law that undermines the fundamental rights and simply will not work", [13] while thousands of artists have joined the Campaign for Fair Copyright voicing their "disappointment" [14] at the RIANZ stance. However, the version was ultimately dropped, and Section 92A of the Copyright Act has now been replaced by Section 122A the Copyright (Infringing File Sharing) Amendment Act 2011 which came in force from 1 September 2011. 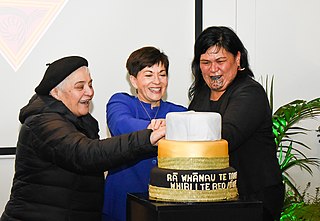 Te Wiki o te Reo Māori is a government-sponsored initiative intended to encourage New Zealanders to promote the use of the Māori language, which, along with New Zealand Sign Language, is an official language of the country. Māori Language Week is part of a broader revival of the Māori language. It has been celebrated since 1975 and is currently spearheaded by Te Puni Kōkiri and the Māori Language Commission, with many organizations including schools, libraries, and government departments participating. 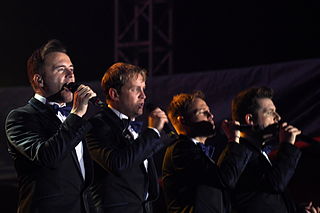 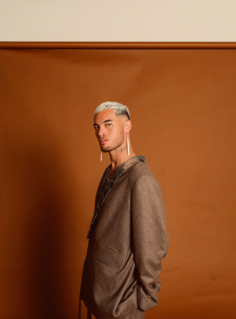 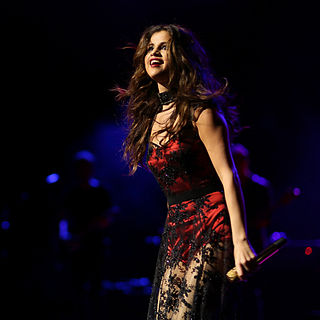 American singer Selena Gomez has released three solo studio albums, two compilation albums, four extended plays (EPs), thirty-three singles and four promotional singles. According to the Recording Industry Association of America (RIAA), as of February 2021, Gomez has had cumulative single certifications of 36 million digital downloads and on-demand streaming, and a further 15 million as part of Selena Gomez & the Scene. As of May 2017, she has sold 24.3 million songs and 3.4 million albums in the United States. As of April 2021, she has more than 5 billion U.S. song streams. As of October 2015, Gomez has sold 6.7 million albums and 22 million singles worldwide. She has amassed 37 chart entries on the US Billboard Hot 100, including a number-one single and 8 top tens. 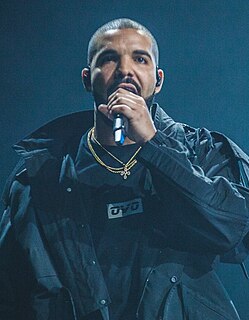 The discography of Canadian rapper and singer Drake consists of six studio albums, three compilation albums, two extended plays, seven mixtapes, 139 singles, five promotional singles and 84 music videos. His music has been released on record labels Universal Motown Records and Republic Records, along with subsidiaries Young Money Entertainment, Cash Money Records and OVO Sound. With 170 million records sold worldwide, he is among the best-selling music artists in history. Drake has achieved 10 No. 1 albums on the Billboard 200 and 9 No. 1 hits on the Billboard Hot 100. Billboard hailed him as the "Artist of the 2010s Decade" and the 16th Greatest Artist of all time. RIAA ranks him as the top-selling digital artist of all time with 163.5 million in the United States.

The discography of Canadian singer Justin Bieber consists of six studio albums, three remix albums, three compilation albums, two extended plays, 72 singles, and nine promotional singles. Bieber has attained 8 number-one hits on the US Billboard Hot 100 and 8 number-one albums on the US Billboard 200 charts. Throughout his career, Bieber has sold an estimated 150 million records worldwide, making him one of the best-selling music artists of all time. According to the Recording Industry Association of America (RIAA), he has sold 21.5 million albums and 107.5 million digital singles units in the United States. Bieber was named the "Greatest Pop Star of 2016" by Billboard. He was also named the Billboard Year-End Top Male Artist for 2016 and placed number seven on the magazine's Decade-End Top Artists Chart for the 2010s. The magazine also ranked him 55th on the Greatest of All Time Artists and 38th on the Greatest of All Time Hot 100 Artists Charts respectively. 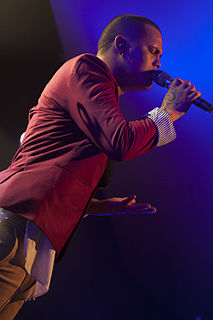 Australian singer-songwriter Sia has released nine studio albums, six live albums, 66 singles, and 42 music videos. In 1997, she released her debut studio album entitled OnlySee. It was commercially unsuccessful, and none of its songs were released as a single. Sia released her second album, Healing Is Difficult, in 2001. The album yielded three singles: "Taken for Granted", "Little Man" and "Drink to Get Drunk". The lead single, "Taken for Granted", peaked at number 10 on the UK Singles Chart. 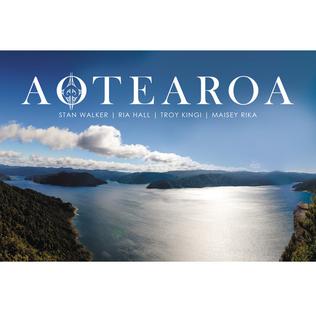 "Aotearoa" is a song by New Zealand recording artist Stan Walker featuring Ria Hall, Troy Kingi and Maisey Rika. It was released as a single through Sony Music Australia on 21 July 2014. "Aotearoa" peaked at number two on the New Zealand Singles Chart. 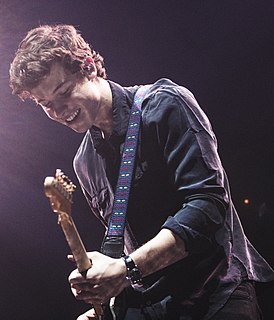 The discography of Kimbra, a New Zealand indie pop singer, consists of three studio albums and sixteen solo singles, as well as fifteen music videos. Her biggest international hit to date is her collaboration with Gotye, "Somebody That I Used to Know", which reached #1 in several countries, including the United States, the United Kingdom and Australia, as well as in Kimbra's native New Zealand. 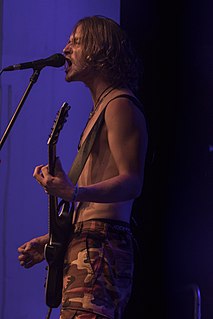 Alien Weaponry is a New Zealand metal band from Waipu, formed in Auckland in 2010. The band consists of drummer Henry de Jong, guitarist Lewis de Jong and, since August 2020, bass player Tūranga Morgan-Edmonds. All three members have Māori ancestry and a number of their songs are written and performed in the Māori language. 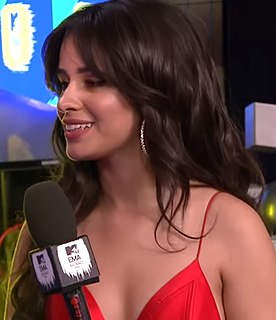 American singer Camila Cabello has released two studio albums, one soundtrack albums, one extended plays (EPs), 26 singles, 4 promotional singles, and 27 music videos. According to RIAA, Cabello has sold 31.5 million albums and singles in the United States. Her 2017 smash hit "Havana" is certified diamond in the US, making her the first hispanic female artist to do so. Billboard listed Cabello as the 87th Top Artists of the 2010s, as well as the 33rd Top Social 50 of the Decade. Her debut album Camila placed at No. 142 on Billboard 200 Decade-End Chart, while "Havana" was placed at No. 59 on Billboard Hot 100 Decade-End chart respectively. 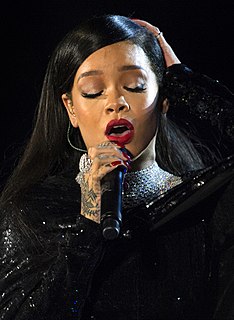 Barbadian singer Rihanna has released 52 singles as lead artist, 18 singles as a featured artist, 2 charity singles, and 4 promotional singles. One of the best-selling artists of all time, her albums and singles sales as of 2018 stood at 250 million. In the United States, Rihanna has amassed 14 number-one songs and 31 top-ten songs on the Billboard Hot 100. She has tallied 60 weeks at number one and is the artist with the most weeks in the top ten (360). The Recording Industry Association of America (RIAA) recognized Rihanna as the top-selling female digital singles artist, with 151.5 million certified units as of November 2021. 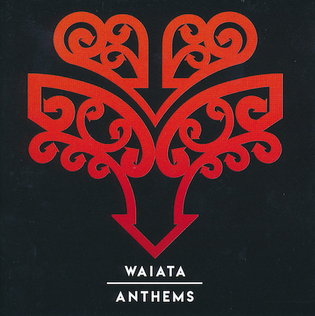 Waiata / Anthems is compilation album by New Zealand artists, whereby they re-record previous songs from English to Māori language. It was released in New Zealand 6 September 2019 and it debuted at number 1 on the Official New Zealand Music Chart.

Ka Hao is a New Zealand youth choir that formed in 2019. Coming from Gisborne District, the group performs music in the Māori language. In 2020 the group won the Mana Reo Award at the 2020 Aotearoa Music Awards, as a part of the supergroup Mōhau. In 2021 the group released their debut single "35", which after gaining popularity through TikTok was one of the most successful songs performed in Māori during Te Wiki o te Reo Māori 2021.

Maimoa is a New Zealand musical group. Formed from current and former presenters from the Māori Television show Pūkana, the group debuted in 2016 with the single "Maimoatia", which was released to celebrate te Wiki o te Reo Māori. Since their debut, the group has continued to release pop singles sung in te Reo Māori, including "Wairua" (2017), a viral hit produced by members of the New Zealand band Sons of Zion. 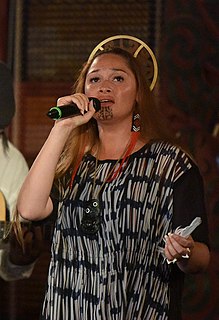 Maisey Rika is a New Zealand singer, songwriter and composer, performing in both English and Māori. Her five original albums have each reached the Top 40 in the Official New Zealand Music Chart. She was named an Arts Foundation Laureate in 2021, has received awards at the Waiata Māori Music Awards and APRA Awards, including APRA Best Māori Songwriter in 2010 and 2013, and has twice won Best Māori Language Album at the NZ Music Awards.