Kidnapped (1938) is an adventure film directed by Otto Preminger and Alfred L. Werker, starring Warner Baxter and Freddie Bartholomew, and based on the 1886 novel Kidnapped by Robert Louis Stevenson.

Katherine Agnew MacDonald was an American actress and film producer. She was born in Pittsburgh, Pennsylvania. 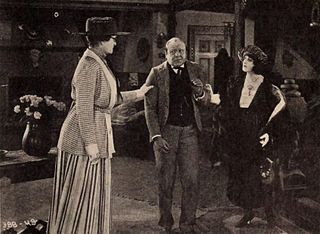 Margaret Campbell was an American character actress in silent films. In her later years she was the secretary of the Bahá'í Spiritual Assembly of Los Angeles. 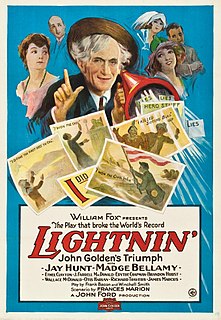 Lightnin' is a 1925 American silent comedy film directed by John Ford. It was based on a successful play of the same name. The original run of the play started in 1918 at the Gaiety Theatre and continued for 1,291 performances, breaking the record for longest running play at that time.

Cairo is a 1942 musical comedy film made by MGM and Loew's, and directed by W. S. Van Dyke. The screenplay was written by John McClain, based on an idea by Ladislas Fodor about a news reporter shipwrecked in a torpedo attack, who teams up with a Hollywood singer and her maid to foil Nazi spies. The music score is by Herbert Stothart. This film was Jeanette MacDonald's last film on her MGM contract.

The Birthday Honours 2005 for the Commonwealth realms were announced on 11 June 2005 to celebrate the Queen's Birthday of 2005. The recipients of honours are displayed here as they were styled before their new honour, and arranged first by the country whose ministers advised the Queen on the appointments, then by honour, with classes and then divisions as appropriate. 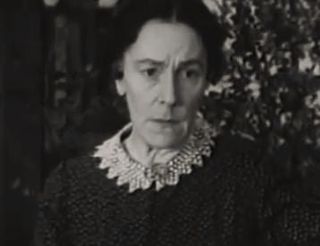 The 1993 Queen's Birthday honours were appointments by some of the 16 Commonwealth realms to various orders and honours to recognise and reward good works by citizens of those countries. The Birthday Honours are awarded as part of the Queen's birthday celebrations and were announced on 11 June 1993 for the United Kingdom, the Bahamas, Solomon Islands, Saint Lucia, Grenada, Papua New Guinea, and New Zealand and the Cook Islands. The list for Australia was announced separately on 14 June.

Queen's Birthday Honours are announced on or around the date of the Queen's Official Birthday in Australia, Canada, New Zealand and the United Kingdom. The dates vary, both from year to year and from country to country. All are published in supplements to the London Gazette and many are conferred by the monarch some time after the date of the announcement, particularly for those service people on active duty.

White Shoulders is a lost 1922 American silent drama film starring Katherine MacDonald that was directed by Tom Forman. It was produced by B. P. Schulberg and released through Associated First National, later First National Pictures.

Hotel Continental is a 1932 American Pre-Code crime film directed by Christy Cabanne and starring Peggy Shannon, Theodore von Eltz and J. Farrell MacDonald. Various criminals search for loot stashed in a luxury hotel which is about to close. 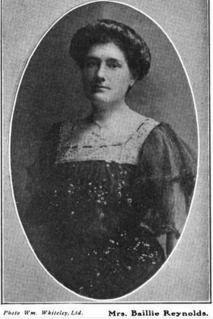 Gertrude Minnie Robins was an English writer, author of over fifty novels, many of them under her married name, Mrs. Baillie Reynolds. 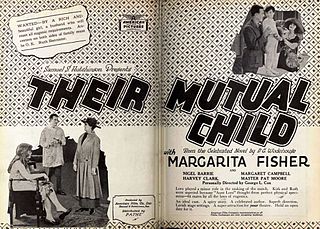 Their Mutual Child is a lost 1920 American silent comedy film directed by George L. Cox and starring Margarita Fischer, Joseph Bennett and Margaret Campbell. It was based on the novel of the same title by P. G. Wodehouse.

The Girl in the Web is a 1920 American silent mystery film directed by Robert Thornby and starring Blanche Sweet, Nigel Barrie, and Adele Farrington.