The Rock Pool is a novel written by Cyril Connolly, first published in 1936. It is Connolly's only novel and is set at the end of season in a small resort in the south of France. Connolly's main character, Naylor, starts with a study of the decadent inhabitants of the resort and ends up becoming one of them.

Connolly had married in 1930 and with the financial support of his wife had been able to enjoy a life of travel and particularly enjoyment of Mediterranean resorts. The novel is set in the fictitious Trou-sur-mer ("Hole on the Sea"), which is said to have been based on Cagnes-sur-Mer between Cannes and Nice.

Connolly had difficulty having the work published. The publisher who initially accepted it then turned it down because one of the partners objected to the heavy lesbian content. A second publisher explained that it could not be published "over here". Connolly then approached the Obelisk Press of Paris, who published it, but complained that the Anglo-Saxon reticence disgraced their list. It was published in Britain by Hamish Hamilton in 1947.

To the modern reader, it may be surprising that the novel should have been considered obscene. The objection at the time was to the lack of "moral weight". This, Connolly attributes to his classical education, when he discovered by the use of cribs that the dry Latin he read was the "ironical, sensual and irreligious opinions of a middle-aged Roman, one whose chief counsel to youth was to drink and make love to the best of its ability".

The central metaphor, the rock pool, was chosen because it represented a repository of life on a seashore, stranded in the rocks after the tide had gone out – an allusion to Trou-sur-mer and its inhabitants. Most of its characters were based on real individuals whose existence was precarious.

The main character, Naylor, was apparently based on two people. One, likely Connolly himself, he described as sensitive, self-pitying, proud, romantic and a day-dreamer, who had lost his ambition and drive. The other was later revealed to be an acquaintance of Connolly: J. N. (Nigel) Richards, [1] who was noted for being unlucky in love and other matters. Richards had abandoned a career as a stockbroker to become a tea planter in Burma – where his first wife had been killed by a crocodile, after falling from a boat. According to Connolly's biographer, Jeremy Lewis, when Connolly wrote The Rock Pool he believed, incorrectly, that Nigel Richards had also died in Burma. [1] And when the two men met by chance, after the novel had been released, Connolly exclaimed: "my God, I thought you were dead!" [1] (During the Second World War, Nigel Richards served with the RAF. In 1944, he was the rear gunner of a Lancaster bomber (JA905), commanded by Flight Lieutenant Jack Newton, shot down in Germany. There were no survivors.)

Connolly dedicated The Rock Pool to Peter Quennell, who had been at Balliol College with him. (Quennell would later write the introduction to a 1981 reprint of the novel.)

In 1938, Connolly published Enemies of Promise , a critical work, in which he attempted to explain his failure to produce the literary masterpiece which he and others believed he should have been capable of writing.

Naylor, an apprentice stock-broker with literary aspirations, drifts into Trou, which he imagines as an archeological relic of the nineteen-twenties riviera life-style. In time he meets a succession of artists and drifters, and in his disappointing quest "to have somebody tonight" he is successively swindled by them. Fascinated by their histories he decides to linger on in the town, but, in a clash between his staid English upbringing and the dissolute dog-eat-dog life-style, he is embroiled in squabbles and fights and progressively demoralised by his acquaintances. In due course, the main characters leave town, and Naylor, left behind sinking into a haze of Pernod, finds himself described by passing tourists as "Just another bum".

Eric Arthur Blair, better known by his pen name George Orwell, was an English novelist, essayist, journalist, and critic. His work is characterised by lucid prose, social criticism, opposition to totalitarianism, and support of democratic socialism.

Burmese Days is the first novel by English writer George Orwell, published in 1934. Set in British Burma during the waning days of empire, when Burma was ruled from Delhi as part of British India, the novel serves as "a portrait of the dark side of the British Raj." At the centre of the novel is John Flory, "the lone and lacking individual trapped within a bigger system that is undermining the better side of human nature." The novel describes "both indigenous corruption and imperial bigotry" in a society where, "after all, natives were natives—interesting, no doubt, but finally...an inferior people".

Robert Grant is an English comedy writer, television producer and co-creator of Red Dwarf. Since Red Dwarf, Grant has written two television series, The Strangerers and Dark Ages, and four solo novels, his most recent being Fat. During his career Grant has been involved in two distinct writing partnerships: the first with Doug Naylor, and the second and most recent with Andrew Marshall. 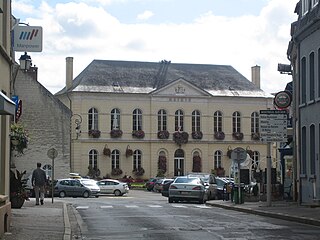 Montreuil, also known as Montreuil-sur-Mer, is a sub-prefecture in the Pas-de-Calais department, northern France. It is located on the Canche river, not far from Étaples. The sea, however, is now some distance away. Montreuil-sur-Mer station has rail connections to Arras and Étaples. 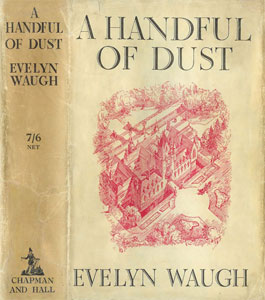 A Handful of Dust is a novel by the British writer Evelyn Waugh. First published in 1934, it is often grouped with the author's early, satirical comic novels for which he became famous in the pre-World War II years. Commentators have, however, drawn attention to its serious undertones, and have regarded it as a transitional work pointing towards Waugh's Catholic postwar fiction.

Cyril Vernon Connolly was an English literary critic and writer. He was the editor of the influential literary magazine Horizon (1940–49) and wrote Enemies of Promise (1938), which combined literary criticism with an autobiographical exploration of why he failed to become the successful author of fiction that he had aspired to be in his youth.

Henry Marie Joseph Frédéric Expedite Millon de Montherlant was a French essayist, novelist, and dramatist. He was elected to the Académie française in 1960. 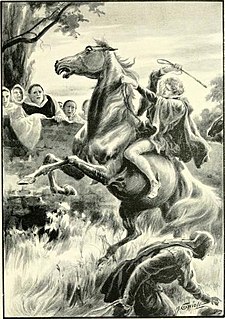 Nigel is an English masculine given name.

The Fortunes of Nigel (1822) is one of the Waverley novels by Sir Walter Scott. Set in London in either 1623 or 1624, it centres on the Scottish community there after the Union of the Crowns and features James VI and I.

Berck, sometimes referred to as Berck-sur-Mer, is a commune in the northern French department of Pas-de-Calais. It lies within the Marquenterre regional park, an ornithological nature reserve.

Nigel Cox was a New Zealand author and museum director, with five novels published as of early 2006. 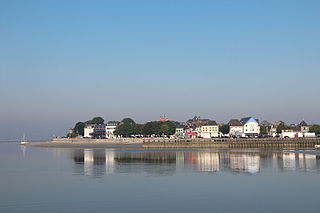 Le Crotoy is a commune in the Somme department in Hauts-de-France in northern France. The inhabitants are known as Crotellois.

Sir Nigel is a historical novel set during the early phase of the Hundred Years' War, spanning the years 1350 to 1356. It was written by British author Sir Arthur Conan Doyle, first published in serial form during 1905–06 where it was illustrated by Joseph Clement Coll. It was illustrated by The Kinneys and Arthur Twidle in its book editions. It is the background story to Doyle's earlier novel The White Company (1891), and describes the early life of that book's hero, Nigel Loring, a knight in the service of King Edward III in the first phase of the Hundred Years' War. The character is loosely based on the historical knight Neil Loring.

The Last September is a 1929 novel by the Anglo-Irish writer Elizabeth Bowen, concerning life in Danielstown, Cork during the Irish War of Independence, at a country mansion. John Banville wrote a screenplay based on the novel; the film adaptation was released in 1999.

As I Was Going Down Sackville Street: A Phantasy in Fact is a book by Oliver St. John Gogarty. Published in 1937 by Rich & Cowan in the UK and by Reynal and Hitchcock in the US, it was Gogarty's first extended prose work and was described by its author as "something new in form: neither a 'memoir' nor a novel". Its title is taken from an obscure Dublin ballad of the same name, which was "rescued from oblivion and obloquy" by Gogarty's erstwhile friend James Joyce, who recited it for Gogarty in 1904 after hearing it in inner city Dublin.