The Zany Adventures of Robin Hood

The Zany Adventures of Robin Hood is a 1984 American made-for-television comedy film directed by Ray Austin and starring George Segal, Morgan Fairchild, Roddy McDowell, Janet Suzman and Tom Baker. It is a parody of the Robin Hood story. [1]

In not-so-merry-old-England during the 13th Century, the neurotic Prince John (Roddy McDowell) sits on the throne, supported by his evil henchman, Sir Guy of Gisbourne (Tom Baker) and constantly ridiculed by his mother, Eleanor of Aquitaine (Janet Suzman). While celebrating his birthday, the Prince becomes unhappy when he discovers his older brother, Richard, is not dead as everyone thought but rather being held for ransom in Austria. As Richard is the rightful King of England, this creates a problem for Prince John. However, Gisbourne openly suggests that they tax the Saxon peasants to raise the ransom, while secretly confiding in the Prince that the King will most likely die of pneumonia before the year is out and that they will keep the money.

The birthday revels are interrupted by Robin Hood (George Segal), disguised in drag and reciting an offensive poem. Not seeing through the disguise, Gisbourne demands she take them to Robin Hood's hideout in Sherwood Forest. That night, Eleanor convinces Maid Marian (Morgan Fairchild) to play up to Gisbourne's advances and use him to help Robin Hood.

When Prince John and Guy travel to Sherwood, they are ambushed by Robin Hood's Merry Men. They are stripped of their garments, their possessions and money stolen, then driven out of the forest. Will Scarlet (Robin Nedwell) frequently tries to make a song out of these events, but thankfully Robin stops him every time.

Eleanor and Marian sneak into the bandits' camp at night, disguised as two nuns, and hoping to enlist Robin's help in freeing King Richard. They are caught by Robin, who recognises them immediately, and the trio eat together and discuss plans. Robin and Marian realise they love each other.

Robin and his band begin travelling across the country to raise the ransom money but nothing goes right. They try robbing a bank only to find that they have won a prize as the hundredth customer and get distracted. When they finally rob the bank, they find it only has three coins and a pfennig. Times are hard for everyone, it seems. Eventually, Robin has to report back to Eleanor that England is broke. She advises him to get the money from Isaac of York (Kenneth Griffith), a Jewish moneylender.

In York, Robin stands out like a sore thumb amongst all the orthodox Jews. Isaac agrees to lend Robin the ransom money provided that in return the King gives the Jews their own country. Isaac suggests Palestine, although Miami would be his second choice. They settle on naming the new country after Isaac's father, Israel. Robin sneaks into the Prince's castle to tell Eleanor, who now insists he must raise an army. Robin then tries to seduce Marian, promising her they'll be wed once King Richard returns, but with little success.

The production visited Kent where they used The Barron’s Hall at Penshurst Place to double as King John’s Hall and the Cathedral and Allington Castle exterior doubles as King John’s castle and the hall as the Bank of Normandy. [2]

John J. O'Connor of The New York Times complained the film felt 'strained' and criticized the jokes and editing. [3] 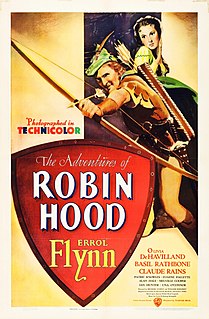 The Adventures of Robin Hood is a 1938 American Technicolor swashbuckler from Warner Bros. Pictures. It was produced by Hal B. Wallis and Henry Blanke, directed by Michael Curtiz and William Keighley, and stars Errol Flynn, Olivia de Havilland, Basil Rathbone, and Claude Rains.

Robin Hood: Prince of Thieves is a 1991 American action-adventure film based on the English folk tale of Robin Hood that originated in the 12th century. It was directed by Kevin Reynolds and stars Kevin Costner as Robin Hood, Morgan Freeman as Azeem, Christian Slater as Will Scarlett, Mary Elizabeth Mastrantonio as Marian, and Alan Rickman as the Sheriff of Nottingham. The screenplay was written by Pen Densham and John Watson. 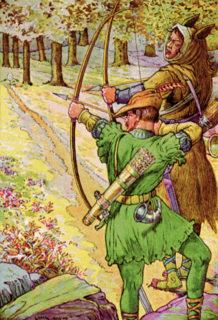 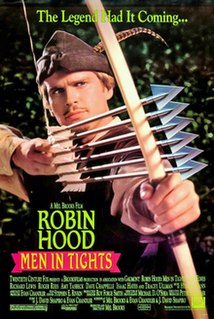 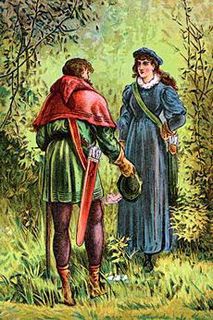 Maid Marian or Marion is the love interest of the legendary outlaw Robin Hood in English folklore. Maid Marian was in origin a "shepherdess" figure associated with May Day. Her role as the love interest of Robin Hood dates to at least the 16th century. She is typically portrayed as beautiful, confident, and sincere in her love of Robin Hood. Often, she is a noblewoman in the stories, though sometimes she is a commoner. Most modern Robin Hood stories feature her prominently and present her as an admirable woman. Of particular note are Marian's independence and relative equality to her lover, marking her as one of the earliest strong female characters in English literature. 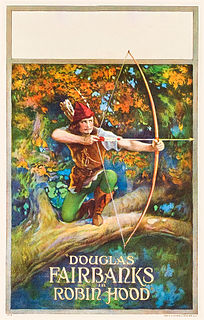 Robin Hood is a 1922 adventure film starring Douglas Fairbanks and Wallace Beery. It was the first motion picture ever to have a Hollywood premiere, held at Grauman's Egyptian Theatre on October 18, 1922. The movie's full title, under which it was copyrighted, is Douglas Fairbanks in Robin Hood. It was one of the most expensive films of the 1920s, with a budget estimated at approximately one million dollars. The film was a smash hit and generally received favorable reviews. 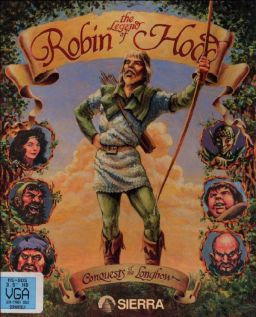 Conquests of the Longbow: The Legend of Robin Hood is a graphic adventure game designed by Christy Marx and published by Sierra On-Line in 1991. It is the second and final part of the Conquests series, which begins with Conquests of Camelot: The Search for the Grail. It features VGA graphics and Sierra's standard icon-driven interface first seen in King's Quest V.

Alan-a-Dale is a figure in the Robin Hood legend. According to the stories, he was a wandering minstrel who became a member of Robin's band of outlaws, the "Merry Men".

Robin Hood is an Italian-Japanese anime series produced by Tatsunoko Production, Mondo TV and NHK. It is an adaptation of the classic Robin Hood story consisting of 52 episodes. In this version, Robin and his allies are mostly pre-teens.

"Robin Hood and the Golden Arrow" is Child ballad 152. 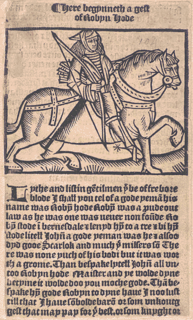 "A Gest of Robyn Hode" is Child Ballad 117; it is also called A Lyttell Geste of Robyn Hode in one of the two oldest books that contain it.

Robin Hood: The Legend of Sherwood is a 2002 stealth-based real-time tactics video game developed by Spellbound Studios. It is similar to games such as Desperados: Wanted Dead or Alive and the Commandos series. In the game, the player controls up to five characters in a setting based on the stories of the protagonist, Robin Hood. The player can also control Robin Hood's Merry Men, including Little John, Friar Tuck, Will Scarlet, Will Stutely, and Maid Marian. Robin and his crew must evade the cruel Sheriff of Nottingham and his henchmen and stop the machinations of the vile usurper to England's throne, Prince John. However, Robin must avoid killing enemies as much as possible, or he will not be able to recruit as many new Merry Men. 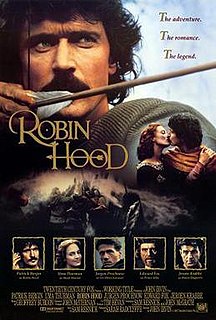 Robin Hood is a 1991 British adventure film directed by John Irvin, executive produced by John McTiernan and starring Patrick Bergin, Uma Thurman, Jürgen Prochnow, Jeroen Krabbé and Edward Fox. Although originally intended for a theatrical release in the United States and South America, the film was premiered on the Fox network in those territories a month before the release of Robin Hood: Prince of Thieves. It was released in cinemas in several countries in Europe and elsewhere, including Australia, New Zealand and Japan. 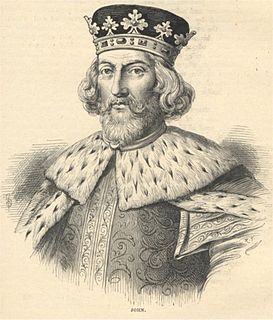 John of England has been portrayed many times in fiction, generally reflecting the overwhelmingly negative view of his reputation.

The Outlaws of Sherwood is a retelling of the legend of Robin Hood by Robin McKinley. In McKinley's afterword, she says, "The retellings through the centuries have echoed concurrent preoccupations." The story includes both the traditional Robin Hood characters — Little John, Much, Friar Tuck, Marian and Alan-a-dale — and characters of McKinley's own invention. Notably, three of the most important characters are women, all of whom escape marriage to prospective spouses chosen by their fathers. 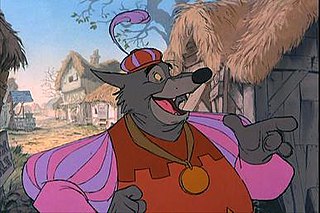 The Sheriff of Nottingham is the main antagonist in the legend of Robin Hood. He is generally depicted as an unjust tyrant, who mistreats the local people of Nottinghamshire, subjecting them to unaffordable taxes. Robin Hood fights against him, stealing from the rich, and the Sheriff, in order to give to the poor; a characteristic for which Robin Hood is best known. 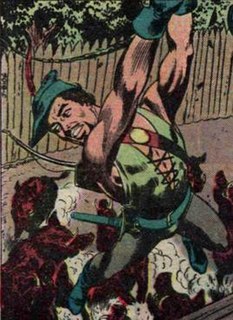 Tom and Jerry: Robin Hood and His Merry Mouse is a 2012 American animated direct-to-video action comedy film starring the seven-time Academy Award-winning cat-and-mouse duo Tom and Jerry as well as the historical and heroic outlaw Robin Hood. Produced by Warner Bros. Animation and Turner Entertainment Co., the film was released on DVD and Blu-ray on September 28, 2012.

Lady of the Forest: A Novel of Sherwood is a 1992 historical fiction novel by American author Jennifer Roberson. A re-telling of the Robin Hood legend from the perspective of twelve characters associated with the legend, the story centers around English noblewoman Lady Marian FitzWalter's encounters with Lord Robert of Locksley and his scheming rival the Sheriff of Nottingham amid the backdrop of Prince John's schemes – he aims to increase his own wealth and power at the expense of post-Conquest England and his brother, King Richard.