Last updated August 01, 2022
For other politicians of this name, see Thomas Burton (disambiguation).

Thomas Burton (died 1661), of Brampton Hall, Westmorland, was an English politician, the Member of Parliament for Westmorland from 1656 to 1659, now known as a parliamentary diarist.

He was a justice of the peace for Westmorland. He was returned to parliament as member for the county on 20 August 1656. On 16 October 1656 he was called upon by the parliament to answer a charge of disaffection towards the existing government, which he did to the satisfaction of the house. Burton was re-elected for Westmorland to Richard Cromwell's parliament, which met on 27 January 1659 and was dissolved on 22 April 1659. He did not sit in parliament after the Restoration of 1660. Although he spoke rarely, he is assumed to have been a regular attender in the House of Commons.

Burton has been identified as the author of a diary of parliamentary proceedings from 1656 to 1659. The authorship was in dispute during the nineteenth century, as reported by Sidney Lee in the Dictionary of National Biography , Thomas Carlyle having suggested Nathaniel Bacon; later research has confirmed it, according to Ivan Roots in the Oxford Dictionary of National Biography . It was edited and published in four volumes in 1828 by John Towill Rutt, a key record of proceedings in the Parliaments of 1656–1659.

The Diary was first printed in 1828, by Rutt, from the author's notebooks, which had come into the possession of William Upcott, librarian of the London Institution. The manuscripts, which form six oblong 12mo volumes, are now in the British Library (Add MSS 15859–15864), and bear no author's name. The editor prefixed extracts from the Journal of Guibon Goddard, M.P., dealing with the parliament of 1654.

William Boteler was a member of the Parliament of England. After the English Civil War, he was appointed Major-General for Bedfordshire, Huntingdonshire, Northamptonshire and Rutland during the Rule of the Major-Generals.

Francis Osborne was an English essayist, known for his Advice to a Son, which became a very popular book soon after the English Restoration.

Henry Neville (1620–1694) was an English politician, author and satirist, best remembered for his tale of shipwreck and dystopia, The Isle of Pines published in 1668.

Sir Lislebone Long (1613–1659), was a supporter of the Parliamentary cause during the English Civil War, but he was a Presbyterian and he resisted Pride's Purge and although not secluded by Pride, he shortly afterwards absented himself for a short while from the House. After the regicide of Charles I, in which he took no part, he was an active member of the three Protectorate parliaments and was knighted by the Lord Protector Oliver Cromwell.

The Hon. Anchitell Grey was an English politician who sat in the House of Commons in two periods between 1665 and 1695. Although he spoke rarely, he kept a detailed diary of proceedings in the House of Commons, summarising the speeches he heard. The diary, published in the 18th century, is the main surviving record for the debates in Parliament in most of the period that it covers. 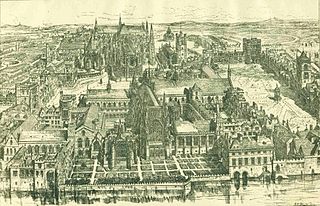 Henry Scobell was an English Parliamentary official, and editor of official publications. He was clerk to the Long Parliament, and wrote on parliamentary procedure and precedents.

Durham College, or New College, Durham, was a university institution set up by Oliver Cromwell, to provide an alternative to the older University of Oxford and University of Cambridge. It also had the aim of bringing university education to Northern England.

Thomas Gewen was an English politician who sat in the House of Commons variously between 1645 and 1660.

Francis Thorpe (1595–1665) was an English barrister, judge and politician.

Reflections upon some Persons and Things in Ireland is an essay, written by Sir William Petty (1620-1687) and published in 1660. It contains a summary of the work carried out by Petty in the so-called Down Survey, and especially a defense against the critics that were cast upon him afterwards. It was a further elaboration of the short pamphlet, titled The Proceedings between Sankey and Petty, that was published by Petty the year before.