He played eight games as for the Denmark national football team, both as wingback and attacking midfielder.

Born in Frederiksberg in Copenhagen, [2] Rasmussen started his career in minor Danish club Glostrup IF 32. He debuted on the Danish under-19 national team in July 1996, and moved abroad to play for K. Sint-Truidense V.V. in Belgium. He returned to Denmark to play for an amateur club in Birkerød. When he got married in 1998, Rasmussen took his wife's last name, naming himself Thomas Schultz. [ citation needed ]

In 2000, Schultz made his debut for Farum B.K. in the Danish 1st Division. He helped Farum win promotion for the top-flight Danish Superliga in 2002. During the 2002–03 Danish Superliga season, Schultz played 31 of 33 league games, scoring five league goals. He made his debut for the Danish national team in April 2003. In the summer 2003, Schultz moved to Germany, to play for Hansa Rostock in the top-flight Bundesliga. At Rostock, he joined fellow Dane Kim Madsen. In August 2003, Schultz changed his name back to Rasmussen, at the initiative of Hansa Rostock. He had never legally changed his last name, and Rostock wanted him to use the name on his birth certificate; Thomas Rasmussen. [3]

In his first season at Rostock, Rasmussen played 28 of 34 league games and scored three goals, helping Rostock finish in ninth place. He was called up for the Danish national team once more, and played his second national team game in April 2004. In the 2004–05 German Bundesliga season, Rasmussen played 31 league games and scored four goals, but Rostock finished in 17th place, and was relegated to the 2. Bundesliga. Having played two 2. Bundesliga games for Rostock, Rasmussen returned to Denmark in August 2005, to play for defending Danish Superliga champions Brøndby IF. [ citation needed ]

Ebbe Sand is a Danish Director of Football at Brøndby IF who is also a former professional footballer who played as a striker for Brøndby IF in Denmark and FC Schalke 04 in Germany. He was the German Bundesliga top scorer in 2001, and won the DFB-Pokal in 2001 and 2002 with Schalke. On the international stage, he represented the Denmark national football team at the 1998 and 2002 FIFA World Cup, as well as the 2000 and 2004 European Championships. At the 1998 World Cup, he scored the fastest-ever World Cup goal by a substitute – 16 seconds after entering the match.

Peter Planch Madsen is a retired Danish professional footballer who played as a striker.

Bo Janne Andreas Jakobsson is a Swedish former professional footballer in the defender position and the defensive midfielder. He has played 36 international matches for the Sweden national team, and was a squad player for the 2002 FIFA World Cup and the 2004 European Championship.

Bent Christensen Arensøe, formerly known as Bent René Christensen, is a Danish former professional footballer who played as a striker.

Jonas Kamper is a Danish footballer who played as a right winger. He started his career with Brøndby IF, winning the 2005 Danish Superliga. He holds the record of Denmark national youth team matches, with a combined 93 matches and 15 goals at various youth levels. He played a single match for the Denmark national football team. He was a speedy player and was known for his skills to shoot at goal from distance. During his career he had offers from Ajax, Portsmouth, Schalke 04, Espanyol, Hannover and Sion that did not amount to anything.

Jesper Hansen is a Danish professional footballer. He plays as a goalkeeper for FC Midtjylland. Hansen accumulated 18 youth caps for Denmark under six different age groups; he has not earned any senior caps.

Morten Bisgaard is a Danish football coach and former professional player, who played as a midfielder. He played eight games and scored one goal for the Denmark national football team, and represented his country at the 2000 European Championship. At club level he played for Randers Freja, OB, Viborg FF and F.C. Copenhagen in Denmark, as well as for Udinese in Italy and Derby County in England. He now works as a commentator and expert on football on the Danish TV channel TV2 Denmark.

Jeppe Lund Curth is a retired Danish footballer who played as a forward. He has played 43 matches and scored 15 goals for various Danish youth national teams, most recently the Danish national under-21 team.

Steffen Højer is a Danish former footballer, who played most of his career for Viborg FF. He played for a number of Danish clubs, and most notably won the 1998–99 Danish Superliga with AaB. A prolific striker in the Superliga, he finished league top scorer three years in row in the 2003–04 (joint), 2004–05 and 2005–06 seasons. He played one match for the Danish national team. 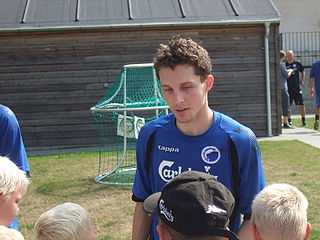 Morten Nordstrand Nielsen is a Danish former professional footballer, who played as a striker. He is currently the assistant coach of F.C. Copenhagen U17. He has played eight times for the Denmark national football team.

Dennis Mengoy Cagara is a Danish–Filipino former professional footballer who played as a left back. He represents the Philippines at international level, having previously played for Denmark at various youth levels.

Jan Lewis Bartram, known simply as Jan Bartram, is a Danish former professional association football player in the midfielder position. He played for Scottish team Rangers and Bayer 05 Uerdingen in Germany, as well as Danish teams AGF and Brøndby IF. He earned 32 caps and scored five goals for the Denmark national team and was in the Danish squad for the 1986 FIFA World Cup.

Mike Tullberg is a Danish football manager, currently working as the manager of Borussia Dortmund II, and former professional footballer who played as a forward.

Joakim Persson is a Swedish football manager and former player. He is the head coach of Varbergs BoIS.