Sanderling was born in Novosibirsk, and began his education by studying violin at the special school of the Leningrad Conservatory. In 1960, he began his studies at the Hochschule für Musik "Hanns Eisler" in Berlin. In 1962, after winning a national conducting competition, he made his debut as a conductor, followed by further studies with Hans Swarowsky. He was assistant to Herbert von Karajan and Leonard Bernstein.

Sanderling started his career in Sondershausen and Reichenbach, before being appointed music director in Halle/Saale in 1966. In 1978, he made his debut at the Wiener Staatsoper and later at the Bayerische Staatsoper. He served as principal guest conductor at the Deutsche Staatsoper Berlin from 1978 to 1983. He moved to the Federal Republic of Germany in 1983. Between 1984 and 1986, he was principal conductor and artistic advisor of the Amsterdam Philharmonisch Orkest.

Sanderling has a particular relationship with the music of Dmitri Shostakovich, and to Shostakovich himself. [4] Shostakovich attended Sanderling's Moscow debut, and subsequently asked him to conduct the German first performances of his Symphonies No. 13 and 14. Sanderling also made the first German translation of both symphonies' texts, with the composer's authorisation. Sandering has recorded commercially Shostakovich's Michelangelo Suite, and song cycles for orchestra on Deutsche Grammophon.

Eliahu Inbal is an Israeli conductor.

Walter Weller was Austrian-born conductor and classical violinist. He made several recordings over the years, founded his own string quartet. and led/co-led several well known orchestras and operas. Weller won multiple awards throughout his lifetime. 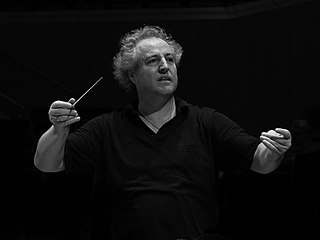 Manfred Honeck is an Austrian conductor and Music Director of the Pittsburgh Symphony Orchestra since the 2008/2009 season. In 2018, he was named Artist of the Year by the International Classical Music Awards. On 28 January 2018, Honeck and the PSO were awarded the 2018 Grammy Award for Best Orchestral Performance for their recording of Shostakovich Symphony No. 5 and Barber Adagio for Strings. The recording won a second Grammy for Best Engineered Album.

Lü Shao-chia is a Taiwanese conductor. He has been music director of the National Symphony Orchestra of Taiwan since 2010. 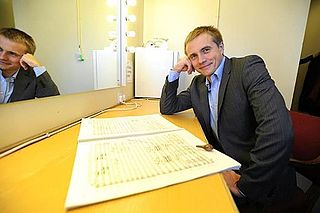 Emmanuel Villaume is a French orchestra conductor. He is currently music director of the Dallas Opera and chief conductor of the Prague Philharmonia.

Ion Marin is a Romanian-Austrian conductor. He is internationally renowned both in operatic and symphonic domains.

Geoffrey Moull is a Canadian professional conductor. He was principal conductor of the Bielefeld Philharmonic Orchestra and music director of the Thunder Bay Symphony Orchestra.

Felix Krieger is a German conductor.