Thomas Schneider (born 6 September 1964, in Göttingen) is a German Egyptologist.

Schneider published the works of Otto Rössler  [ de ]Gesammelte Schriften zur Semitohamitistik (Collected Works on Afro-Asiatic languages) stating that "none of the published works of this scholar have been excluded from the new publication." But in fact, he excluded a large portion of Rössler's numerous Nazi writings, written before 1945, which were produced in close collaboration with the Reich Security Main Office, where Rössler worked as an "expert" to help propagate the idea of Hitler as a savior figure for contemporary Islam in order to improve Nazi Germany's place in the Arab world. 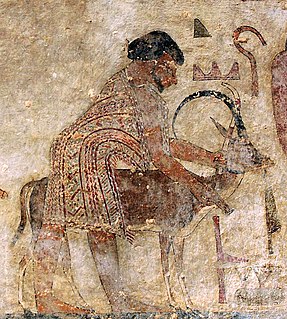 Hyksos is a term which, in modern Egyptology, designates the kings of the Fifteenth Dynasty of Egypt. The seat of power of these kings was the city of Avaris in the Nile delta, from where they ruled over Lower and Middle Egypt up to Cusae. In the Aegyptiaca, a history of Egypt written by the Greco-Egyptian priest and historian Manetho in the 3rd century BC, the term Hyksos is used ethnically to designate people of probable West Semitic, Levantine origin. While Manetho portrayed the Hyksos as invaders and oppressors, this interpretation is questioned in modern Egyptology. Instead, Hyksos rule might have been preceded by groups of Canaanite peoples who gradually settled in the Nile delta from the end of the Twelfth Dynasty onwards and who may have seceded from the crumbling and unstable Egyptian control at some point during the Thirteenth Dynasty.

Manfred Bietak is an Austrian archaeologist. He is professor emeritus of Egyptology at the University of Vienna, working as the principal investigator for an ERC Advanced Grant Project "The Hyksos Enigma" and editor-in-chief of the journal Ägypten und Levante and of four series of the Austrian Academy of Sciences, Institute of Oriental and European Archaeology (2016–2020). 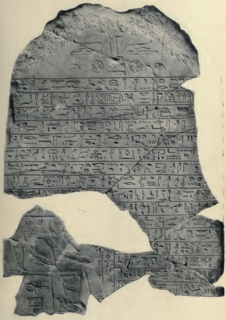 Helmut Satzinger is an Austrian Egyptologist and Coptologist. He studied Egyptology, Arabic Philology and African Languages at the University of Vienna and, for 1 year, at Cairo University. Immediately after obtaining his PhD degree in 1964, he became commissioned to catalogue and publish Coptic papyri in the West Berlin section of the Egyptian Museum of Berlin.

Hans Wolfgang Helck was a German Egyptologist, considered one of the most important Egyptologists of the 20th century. From 1956 until his retirement in 1979 he was a Professor at the University of Hamburg. He remained active after his retirement and together with Wolfhart Westendorf published the German Lexikon der Ägyptologie, completed in 1992. He published many books and articles on the history of Egyptian and Near Eastern culture. He was a member of the German Archaeological Institute and a corresponding member of the Göttingen Academy of Sciences.

Iufni was an ancient Egyptian pharaoh of the 13th Dynasty during the Second Intermediate Period. According to the egyptologists Kim Ryholt and Darrell Baker he was the 7th king of the dynasty, while Jürgen von Beckerath and Detlef Franke see him as the 6th ruler. Iufni reigned from Memphis for a very short time c. 1788 BC or 1741 BC.

Sewadjkare was an Egyptian pharaoh of the 13th Dynasty during the early Second Intermediate Period. According to Egyptologists Kim Ryholt and Darrell Baker he was the eleventh ruler of the dynasty, reigning for a short time c. 1781 BC. Alternatively, Thomas Schneider, Detlef Franke and Jürgen von Beckerath see him as the tenth king of the 13th Dynasty, with Schneider placing his reign at c. 1737 BC.

Hotepibre Qemau Siharnedjheritef was an Egyptian pharaoh of the 13th Dynasty during the Second Intermediate Period. According to egyptologists Kim Ryholt and Darrell Baker, he was the sixth king of the dynasty, reigning for one to five years, possibly three years, from 1791 BC until 1788 BC. Alternatively, Jürgen von Beckerath and Detlef Franke see him as the ninth king of the dynasty.

Neferkasokar was an Ancient Egyptian king (pharaoh) who may have ruled in Egypt during the 2nd Dynasty. Very little is known about him, since no contemporary records about him have been found. Rather his name has been found in later sources.

Detlef Franke was a German Egyptologist specialist of the Middle Kingdom of Egypt.

Herwer was an ancient Egyptian town in the 16th nome in Upper Egypt. It is mentioned in several ancient inscriptions dating from the Old, Middle and New Kingdom. The main deities of the place were Khnum and Heqet, both several times called lord or lady of Herwer. Perhaps in the Middle Kingdom, the place became capital of the 16th Upper Egyptian nome. The local governor Amenemhat of that nome was indeed overseer of the priests of Khnum of Herwer. The place is often mentioned in the tombs of Beni Hasan.

Elba Perla Fuscaldo is an Argentinian Egyptologist, specialist in the ceramics of Ancient Egypt.

Steve Pasek is a German Egyptologist, Demotist, Historian and Classicist. 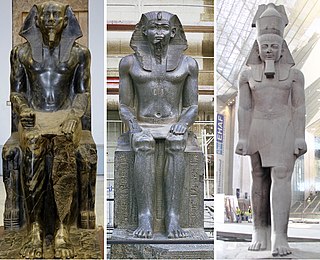 The periodization of ancient Egypt is the use of periodization to organize the 3,000-year history of ancient Egypt. The system of 30 dynasties recorded by third-century BC Greek-speaking Egyptian priest Manetho is still in use today ; however, the system of "periods" and "kingdoms" used to group the dynasties is of modern origin. The modern system consists of three "Golden Ages", interspersed between "intermediate periods" and early and late periods.

Rainer Hannig was a German Egyptologist.