Thomas J. Spota III (born 1941,New York) is a former American attorney and politician,who served as the District Attorney of Suffolk County,New York,serving from 2002 to late 2017,but was disbarred on June 10,2020. [1] Spota resigned November 10,2017,after he was indicted on federal charges of obstruction of justice in the investigation of Suffolk County Police Chief James Burke. [2] [3] [4] Spota was subsequently found guilty and sentenced to five years in federal prison and fined $100,000 . [5]

Spota was born in 1941 and grew up in New Hyde Park,New York,on Long Island. He graduated from Chaminade High School,a private Catholic school in Mineola,New York. He earned degrees at Fairfield University in Fairfield,Connecticut,and St. John's University School of Law in Jamaica,Queens,New York. [6]

After passing the bar,Spota worked as an assistant prosecutor under Suffolk County District Attorney Patrick Henry,during the 1970s and early 1980s. He entered private law practice in Suffolk,representing clients including the Suffolk Detectives Association and other law enforcement unions. [7]

Spota's career ended with his disbarment in 2020 and his sentencing to five years in federal prison in 2021.

He lived in Mount Sinai,New York,with his wife. They have three grown children.

In 2001 Republican-turned-Democrat Spota ran for District Attorney,and defeated three-time incumbent James M. Catterson Jr in November 2001,taking 58% of the vote. That year in Nassau County,Democrats also were victorious in many positions. [8] He was reelected in 2005, [9] and again in 2009 without any major-party opposition. [10] Spota has been active in the fight against the distribution of child pornography over the Internet. In 2003,Spota indicted twelve Suffolk residents who used KaZaA,a file-sharing program to spread child pornography. [11] Spota was called to testify before the United States Senate Committee on the Judiciary on September 9,2003,at a hearing concerning "Pornography,Technology,and Process:Problems and Solutions on Peer-to-Peer Networks." Spota recommended a new federal task force and said that legislation was needed to "attack the owners and the distributors of these programs,who are reaping enormous profits." [12] From December 2010,his office oversaw the investigation of numerous homicides in Suffolk County,believed to have been perpetrated by a single unidentified person,known as the Long Island serial killer,or LISK. The remains of at least ten persons have been found on South Shore beaches,and are believed to be related. The open homicide investigation is still underway. Among the successful cases prosecuted by his office was the conviction in May 2017 of John Bittrolff,a Manorville carpenter charged with the homicides of prostitutes Rita Tangredi and Colleen McNamee,whose bodies were found on area South Shore beaches in 1993 and 1994,respectively. [13]

In May 2013 the FBI and the US Attorney's Office opened an investigation into alleged actions by James Burke,Chief of the Suffolk County Police Department:the alleged assault of a suspect in police custody,a subsequent cover-up,and coercion of witnesses. The former chief pleaded guilty to reduced charges in February 2016. [14]

The federal inquiry subsequently expanded beyond Burke to investigate a broader pattern of corruption in both the police department and the office of the Suffolk County district attorney,Thomas J. Spota. [14] In October 2017,Spota and an aide were indicted on charges of obstructing the investigation of James Burke for police brutality. [15] [16] Spota resigned from office on November 10,2017. He was convicted of obstruction,witness tampering,and conspiracy charges in December 2019 [17] and disbarred in June 2020. [18] Spota's sentencing was delayed multiple times but he was sentenced to 5 years in federal prison and a $100,000 fine on August 10,2021. [5]

JonBenét Patricia Ramsey was an American child beauty queen who was killed at the age of six in her family's home in Boulder,Colorado. A long handwritten ransom note was found in the home. Her father,John,found the girl's body in the basement of their house about seven hours after she had been reported missing. She had sustained a broken skull from a blow to the head and had been strangled;a garrote was found tied around her neck. The autopsy report stated that JonBenét's official cause of death was "asphyxia by strangulation associated with craniocerebral trauma". Her death was ruled a homicide. The case generated nationwide public and media interest,in part because her mother Patsy Ramsey,a former beauty queen,had entered JonBenét into a series of child beauty pageants. The crime is still unsolved and remains an open investigation with the Boulder Police Department. 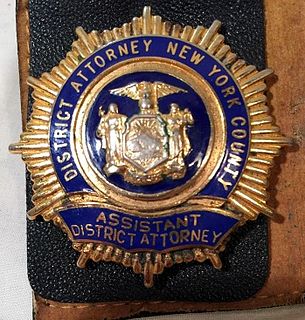 In the United States,a district attorney (DA),state's attorney,prosecuting attorney,commonwealth's attorney, or state attorney is the chief prosecutor and/or chief law enforcement officer representing a U.S. state in a local government area,typically a county or a group of counties. The exact name and scope of the office varies by state. Alternative titles for the office include county attorney,solicitor,or county prosecutor.

Kathleen Maura Rice is an American attorney,prosecutor,and the United States representative for New York's 4th congressional district. She is a member of the Democratic Party. Before serving in Congress,Rice served as the Nassau County district attorney,and,before that,she served as a federal prosecutor in the U.S. Attorney's Office in Philadelphia and as an assistant district attorney in the Kings County District Attorney's Office in New York City.

Martin H. Tankleff is an American man who was wrongly convicted of murdering his wealthy parents,Seymour and Arlene Tankleff,on September 7,1988,when he was 17 years old. After serving more than 17 years of imprisonment,his conviction was vacated and he was released from prison in 2007. He is now an attorney.

Michael Byron Nifong is an American former North Carolina attorney,and criminal who has been disbarred. He served as the district attorney for Durham County,North Carolina until he was removed,disbarred and jailed following court findings concerning his conduct in the Duke lacrosse case,primarily his conspiring with the DNA lab director to withhold exculpatory DNA evidence that could have acquitted the defendants. 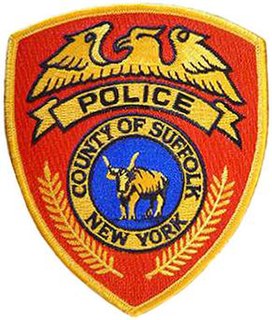 The Suffolk County Police Department (SCPD) provides police services to 5 of the 10 Towns in Suffolk County,New York. It is one of the largest police agencies in the United States,with approximately 2500 sworn officers.

Dianne Wilkerson is a former Democratic member of the Massachusetts Senate,representing the 2nd Suffolk District from 1993 to 2008.

Vincent Asaro is an American mobster and former captain in the Bonanno crime family.

Cyrus Roberts Vance Jr. is an American attorney and politician who served as the District Attorney of New York County,New York,also known as the Manhattan District Attorney. He was previously a principal partner at the law firm of Morvillo,Abramowitz,Grand,Iason,Anello,&Bohrer,P.C. He is the son of Cyrus Vance Sr.,former Secretary of State under President Jimmy Carter. Vance did not seek reelection as District Attorney in the 2021 election,and was succeeded by Alvin Bragg. 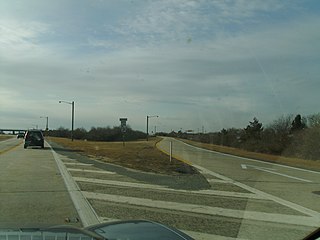 The Long Island serial killer is an unidentified suspected serial killer who is believed to have murdered between 10 and 16 people over a period of nearly 20 years,and to have disposed of their bodies in areas on the South Shore of Long Island,New York. Most of the known victims were sex workers who advertised on Craigslist.

Lisa A. Biron is an attorney from Manchester,New Hampshire,and a convicted child molester and child pornographer. In November 2012,she was indicted on federal charges related to the sexual exploitation of her 14-year-old daughter,including taking her to Canada to have sex with a man there. She was convicted on all charges in a January 2013 trial,and was sentenced that May to 40 years in prison.

In 2013,two prosecutors and a prosecutor's wife were murdered in Kaufman County,Texas. The case gained national attention in the United States due to speculation that the Aryan Brotherhood prison gang was responsible,but this was later found to be untrue.

William J. Corcoran was an American lawyer who served as District Attorney of Middlesex County,Massachusetts from 1913 to 1917. He later faced a number of criminal indictments and was convicted of one count of extortion.