The 6 Metre was a sailing event on the Sailing at the 1908 Summer Olympics program in Ryde. Three races were scheduled. 15 sailors, on 5 boats, from 4 nation competed.

Raymond Ernest Stehr was an Australian rugby league footballer, a state and national representative player whose club career was played at Sydney's Eastern Suburbs club. He has been named as one of the nation's finest footballers of the 20th century. 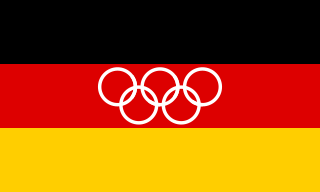 Athletes from East Germany and West Germany competed together as the United Team of Germany for the last time at the 1964 Summer Olympics in Tokyo, Japan. 337 competitors, 275 men and 62 women, took part in 159 events in 19 sports.

Edward Thomas "Eddie" O'Brien was an American runner who competed mainly in the 400 meters. He competed for the United States in the 1936 Summer Olympics held in Berlin, Germany, in the 4 x 400 meter relay, where he won the silver medal with his teammates Harold Cagle, Robert Young and Alfred Fitch.

The United States Virgin Islands competed in the 2008 Summer Olympics, which were held in Beijing, the People's Republic of China from August 8 to August 24, 2008. The appearance of its 23-person delegation marked its fifteenth appearance at the Olympic games, and its tenth appearance at the Summer Olympic games. In total, seven athletes participated on behalf of the Virgin Islands in Beijing. Of those, John Jackson and Tabarie Henry progressed to a post-preliminary event, and Henry reached semifinals in his own. There were no Virgin Islander medalists at the Beijing Olympics.