Thomas Swayne (dates of birth and death unknown) was a noted professional cricketer who played for Surrey in the 1770s.

Depending on his age, it is assumed that most of his career took place before cricket's statistical record began with regular scorecards in 1772. He made 3 known appearances in first-class cricket matches between 1775 and 1778, but it is believed he was playing much earlier as he had become the landlord of the White Hart at Chertsey by 1773. The vocation of pub landlord was a common career option for players at the end of their playing days.

According to the Public Advertiser on Friday 10 September 1773, at the following week's Surrey v Hampshire match, "a stand will be built on the ground (i.e., Laleham Burway), and the best accommodation provided there and at the White Hart at Chertsey by Thomas Swayne". [1]

John Small was an English professional cricketer who played during the 18th century and had one of the longest careers on record. Born at Empshott, Hampshire, he is generally regarded as the greatest batsman of the 18th century and acknowledged as having been the first to master the use of the modern straight bat which was introduced in the 1760s. He probably scored the earliest known century in important cricket. He died at Petersfield, where he was in residence for most of his life and where he established businesses.

The years from 1726 to 1771 saw cricket establish itself as a leading sport in London and the south-eastern counties of England. In 1726, it was already a thriving sport in the south east and, though limited by the constraints of travel at the time, it was slowly gaining adherents in other parts of England, its growth accelerating with references being found in many counties to 1771. Having been essentially a rural pastime for well over a century, cricket became a focus for wealthy patrons and gamblers whose interests funded its growth throughout the 18th century.

Richard Nyren was an English professional cricketer who played first-class cricket during the heyday of the Hambledon Club. A genuine all-rounder and the earliest known left-hander of note, Nyren was the captain of Hampshire when its team included players like John Small, Thomas Brett and Tom Sueter. Although the records of many matches in which he almost certainly played have been lost, he made 51 known appearances between 1764 and 1784. He was known as the team's "general" on the field and, for a time, acted as the club secretary as well as taking care of matchday catering for many years.

Laleham Burway is a 1.6-square-kilometre (0.62 sq mi) tract of water-meadow and former water-meadow between the River Thames and Abbey River in the far north of Chertsey in Surrey. Its uses are varied. Part is Laleham Golf Club. Semi-permanent park homes in the west forms residential development along with a brief row of houses with gardens against the Thames. A reservoir and water works is on the island.

Chertsey Cricket Club in Surrey is one of the oldest cricket clubs in England, the foundation of the club dating to the 1730s. The club is based in Chertsey and plays in the Surrey Championship.

Henry Attfield was an English cricketer who made his first known appearance in the 1773 season. Aged 17 at the time, he must have been a genuine 1773 debutant. He was a native of Bagshot in Surrey.

Kent county cricket teams have played matches since the early 18th century. The county's links to cricket go back further with Kent and Sussex generally accepted as the birthplace of the sport. It is widely believed that cricket was first played by children living on the Weald in Saxon or Norman times. The world's earliest known organised match was held in Kent c.1611 and the county has always been at the forefront of cricket's development through the growth of village cricket in the 17th century to representative matches in the 18th. A Kent team took part in the earliest known inter-county match, which was played on Dartford Brent in 1709. Several famous players and patrons were involved in Kent cricket from then until the creation of the first county club in 1842. Among them were William Bedle, Robert Colchin and the 3rd Duke of Dorset. Kent were generally regarded as the strongest county team in the first half of the 18th century and were always one of the main challengers to the dominance of Hambledon in the second half. County cricket ceased through the Napoleonic War and was resurrected in 1826 when Kent played Sussex. By the 1830s, Kent had again become the strongest county and remained so until mid-century.

The 1745 English cricket season was the second season following the earliest known codification of the Laws of Cricket.

Stephen Harding was a noted English cricketer of the mid-18th century who played for Chertsey, All-England and Surrey. Harding was a hard-hitting batsman and a good bowler, although his style and pace is unknown. He featured in single wicket contests and seems to have been a fine all-rounder.

Bourne Cricket Club was based at Bishopsbourne, near Canterbury in Kent, and played several major matches in the 18th century when it was one of the teams which effectively representatived Kent as a county. Its home venue was Bourne Paddock. Bourne was patronised by Sir Horatio Mann, owner of the Bourne Park House estate, and was in reality his own private club. When Sir Horatio relocated to Dandelion, near Margate, the Bourne club ceased to exist.

Coulsdon Cricket Club was an English cricket club based at Coulsdon in Surrey. The club is believed to have been formed in the early 1760s and it had for a time a great rivalry with Chertsey Cricket Club.

John Woodaka Thomas Wood was an English cricketer who played for Chertsey Cricket Club and Surrey. His career began in the 1760s before first-class statistics began to be recorded and his known first-class career spans the 1773 to 1780 seasons.

Representing Hampton which was then in Middlesex, the original Hampton Cricket Club was prominent in the 18th century, taking part in known matches from 1726 to 1771. According to surviving records, it had no specific venue and is known to have played at both Hampton Court Green and Moulsey Hurst.

Representing Lingfield in Surrey, Lingfield Cricket Club was prominent in the 18th century, known to have taken part in important matches between 1739 and 1785. They were especially noted in the mid-1740s. According to surviving records, the club is believed to have used Lingfield Common as its home venue in the 18th century. The club has survived and its team currently plays in the Surrey County League; its home venue is Godstone Road, Lingfield. 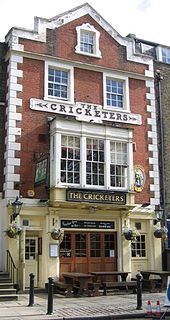 Richmond Green cricket ground, on The Green at Richmond, London, has been a venue for cricket matches since the 17th century. The earliest reference dates from May 1666 and some top-class matches were played there in the first half of the 18th century. A match in 1731, which culminated in a riot, is the earliest in cricket history of which team scores are known. The result of a match in July 1741 is the sport's earliest known tie.