Arthur Haygarth (4 August 1825 –1 May 1903) was a noted amateur cricketer who became one of cricket's most significant historians. He played first-class cricket for the Marylebone Cricket Club and Sussex between 1844 and 1861,as well as numerous other invitational and representative teams including an England XI and a pre-county Middlesex. A right-handed bat,Haygarth played 136 games now regarded as first-class,scoring 3,042 runs and taking 19 wickets with his part-time bowling. [1] He was educated at Harrow,which had established a rich tradition as a proving ground for cricketers. He served on many MCC committees and was elected a life member in 1864. [1]

Outside his playing career,Haygarth was a noted cricket writer and historian. He spent over sixty years compiling information and statistics. [1] Of particular note was his compilation:Frederick Lillywhite's Cricket Scores and Biographies,published in 15 volumes between 1862 and 1879. [1]

Haygarth was born in Hastings,Sussex. He was the youngest of three children of William Haygarth (1784–1825),who died before he was born,and his wife Frances Parry (1794–1886),with older brothers Henry William Haygarth and Colonel Francis Haygarth. [2] Though only he out of his brothers would go on to play cricket,he also had two cousins John Haygarth and Edward Haygarth,who played. [3]

Haygarth attended Harrow School,where he played cricket and enjoyed compiling information and statistics of current and past cricketers. [3] He played several matches for Harrow through 1842 and 1843 against Eton College,Winchester School and the MCC. [4]

In his playing days he was considered,according to Wisden,a "capable exponent of the game." From 1844 he played for the MCC against pre-county teams, [4] and made his first-class debut in a Gentlemen of England v Gentlemen of Kent fixture considered now to be first-class. Played at Lord's,Haygarth made four and 19 batting for the Gentlemen of England though he did not bowl. [5] Haygarth would go on to play for a great multitude of teams in his career. As well as the MCC and Middlesex,he played at the invitation of Fuller Pilch for the F Pilch's XI in 1846,for the Earl of Winterton and the Earl of Leicester,Viscount Mountgarret and the Earl of Stamford,for the Fast Bowlers XI,South of England,and Old Harrovians. [6] Though he also played three matches for Sussex,and twelve matches for the England XI,the vast majority of his cricket was for the MCC. He played 69 matches for the club in total,scoring over 1,600 runs including four half-centuries and his career best 97 which came in 1855. [7] [8]

Haygarth assisted with cricket coaching regularly until 1870,walking to Harrow from his home in central London. Meanwhile,he preoccupied himself with writing and amassing information on cricket. [1] Initially a hobby,it grew to become a profession as more and more of his works were published. [3] The then-captain of Surrey requested a copy of his collections with the intention to publish them in 1852,however several delays postponed the publication by ten years. The first volume of Frederick Lillywhite's Cricket Scores and Biographies was published 1862,with the next thirteen editions being released at intervals until 1895. [3] It contains all the information obtainable from 1746 to 1878,with a supplement concerning notable players for the next 20 years. The volumes appeared at fairly regular intervals between 1862 and 1879. The first four,bound in purple cloth,were published by Fred Lillywhite,son of William Lillywhite. Volume 1 covering the 1744 to 1826 seasons is by far the most significant as it is the main source of reference data for late 18th century cricket. [1] [3]

The last 11 editions,bound in red cloth,with gilded lettering and ornamented with an armorial design of a shield embodying the stumps,bat and ball,were produced at the sole expense of the MCC. At this point,however,the MCC opted to discontinue funding as the works were no longer profitable. [3] The fifteenth and last volume of Scores and Biographies did not appear until 23 years after Haygarth's death. [1]

Haygarth died in 1903 in Pimlico,Westminster,London. Wisden in its obituary named him "a famous cricketer,whose name will always be gratefully recalled as long as the game continues to be played." [1] He is buried at West Brompton Cemetery. [9] A green plaque,unveiled in November 2003,commemorates his home.

John Wisden was an English cricketer who played 187 first-class cricket matches for three English county cricket teams,Kent,Middlesex and Sussex. He is now best known for launching the eponymous Wisden Cricketers' Almanack in 1864,the year after he retired from first-class cricket.

Fuller Pilch was an English first-class cricketer,active from 1820 to 1854. He was a right-handed batsman who bowled at a slow pace with a roundarm action. Pilch played in a total of 229 first-class matches for an assortment of teams,but mostly for Norfolk and Kent. He is remembered as a pioneer of forward play in batting,and especially for a shot called "Pilch's poke". 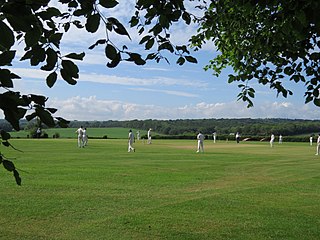 In the 1772 English cricket season,it became normal practice to complete match scorecards and there are surviving examples from every subsequent season. Scorecards from 1772 have been found for three eleven-a-side matches in which the Hampshire county team played against an England team,and for one top-class single wicket match between Kent and Hampshire. The three Hampshire v England matches are the first to have been retrospectively,though unofficially,recognised as first-class. Prior to 1772,only four scorecards have survived,the last from a match in 1769.

Herbert Tremenheere"Herbie" Hewett was an English amateur first-class cricketer who played for Somerset,captaining the county from 1889 to 1893,as well as Oxford University and the Marylebone Cricket Club. A battling left-handed opening batsman,Hewett could post a large score in a short time against even the best bowlers. Capable of hitting the ball powerfully,he combined an excellent eye with an unorthodox style to be regarded at his peak as one of England's finest batsmen.

The Napoleonic Wars had deprived cricket of investment and manpower,particularly after 1810 as the conflict in the Peninsular War reached its height and the invasion of France followed. A recovery began in 1815,the year of the Battle of Waterloo,and a more widespread return to normality can be observed from 1816,although it was not until 1825 that inter-county matches resumed when Kent played Sussex.

William Lambert was an English professional cricketer in the first two decades of the 19th century. Playing mainly for Surrey from 1801,but also for Marylebone Cricket Club (MCC) and some other county teams,Lambert was a right-hand batsman and an underarm slow bowler.

1864 was the 78th season of cricket in England. It was a significant year in cricket history,as it saw the legalisation of overarm bowling and the first edition of John Wisden’s Cricketers’Almanac.

1868 was the 82nd season of cricket in England since the foundation of Marylebone Cricket Club (MCC). It featured the first organised group of Australian sportspeople to travel overseas,being an all-Aboriginal cricket team.

1869 was the 83rd season of cricket in England since the foundation of Marylebone Cricket Club (MCC). The Cambridgeshire club went into demise,thougha team called Cambridgeshire later played in two specially arranged matches,in 1869 against Yorkshire and in 1871 against Surrey. After that,Cambridgeshire ceased to be a first-class team. The problem was attributed to the lack of available amateurs to back up the famous trio of Bob Carpenter,the first Tom Hayward and George Tarrant,along with the absence of useful patronage and the difficulty of obtaining membership which led to a debt deemed unpayable.

The 1787 cricket season in England is noteworthy for the foundation of Marylebone Cricket Club (MCC) after the opening of Thomas Lord's first ground in the parish of Marylebone,north of London. MCC soon became the sport's governing body with the new ground as its feature venue. The first match known to have been played at Lord's was on Monday,21 May,between the White Conduit Club and a Middlesex county team. The first match known to involve a team representing MCC was against White Conduit on Monday,30 July. Including these two,reports and/or match scorecards have survived of numerous eleven-a-side matches played in 1787. Eleven are retrospectively,but unofficially,recognised as first-class.

Frederick William Lillywhite was an English first-class cricketer during the game's roundarm era. One of the main protagonists in the legalisation of roundarm,he was one of the most successful bowlers of his era. His status is borne out by his nickname:The Nonpareil.

James "Jemmy" Dean was an English first-class cricketer with professional status. Mainly associated with Sussex,he is recorded in 305 matches from 1835 to 1861 which are designated first-class by CricketArchive,totalling 5,115 runs at an average of 10.54 with a highest score of 99,holding 206 catches and taking 1,144 wickets with a best analysis of 9/34. Dean achieved 5 wickets in an innings 86 times and 10 wickets in a match 18 times. His nephews David and James,both played first-class cricket.

Variations in published cricket statistics have come about because there is no official view of the status of cricket matches played in Great Britain before 1895 or in the rest of the world before 1947. As a result,historians and statisticians have compiled differing lists of matches that they recognise as "unofficially" first-class. The problem is significant where it touches on some of the sport's first-class records and especially the playing career of W. G. Grace.

Charles Cumberland was an English cricketer of the late 18th and early 19th centuries who is known to have played in 26 matches which are retrospectively rated first-class.

Cricket,and hence English amateur cricket,probably began in England during the medieval period but the earliest known reference concerns the game being played c.1550 by children on a plot of land at the Royal Grammar School,Guildford,Surrey. It is generally believed that cricket was originally a children's game as it is not until the beginning of the 17th century that reports can be found of adult participation.

George Hanmer Leycester was an English amateur cricketer who made 50 known appearances in first-class cricket matches between 1790 and 1808.

Edward Sayres was an English amateur cricketer who played first-class cricket from 1838 to 1842. 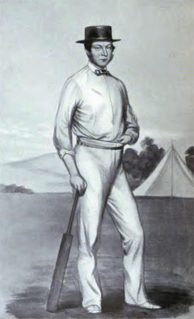 Reginald Hankey was an English first-class cricketer,active from 1853 to 1860.