Thomas Talbot (1819 - 14 February 1891) was a beverage bottler of Gloucester who founded the Talbot Mineral Water Company in 1845. In 1886, he was elected high sheriff of Gloucester and later became an alderman of the city.

Talbot founded the Talbot Mineral Water Company in 1845. The firm had premises in Ladybellegate Street from at least 1867 and occupied some of the buildings of the former Blackfriars monastery and built some new buildings along Commercial Road. In 1873 the firm also had premises at 48 Northgate Street. It later became Talbot Bottlers (Gloucester) Limited. [7]

In 1959 they had offices in Westgate Street. [7] Archaeological investigations of the Ladybellegate site were carried out after 2000 in connection with proposals to redevelop adjacent buildings. [8] [9] The site is now in the ownership of Historic England.

In 1881, Talbot was president of The Gloucester Fish and Game Supply Society Limited. [10] In 1884, he successfully stood for election in the east ward of the City of Gloucester. He was of a Conservative disposition. [11] In November 1886, he was elected high sheriff of the city and served for one year. In November 1888, he was elected for one year an alderman of Gloucester. He was a sidesman of St Mary de Crypt Church. [12]

Talbot died on 14 February 1891. He had been in ill health for some time. The immediate cause of his death was chronic asthma and bronchitis. [12]

Hiram Codd was an English engineer. In 1872, he patented a bottle filled under gas pressure which pushed a marble against a rubber washer in the neck, creating a perfect seal. This became known as the Codd bottle.

Oliver Lyle (1891–1961) was a British sugar technologist during the early 20th century.

James Harwood Panting was a British writer who specialised in school stories for boys. He was the editor of Young Folks and a member of the editorial staff of the South London Press.

Albert Edward Kingwell was an English architect, surveyor and land agent who was one of the first to use concrete in his practice. He oversaw the Jack Estate at Hadley Wood in Hertfordshire for more than 50 years.

Joseph Bevan Braithwaite was an English stockbroker and Quaker. Through his stockbroking firm and personally he played an important part in the development of the electricity supply industry in Britain at the end of the nineteenth century and in the early twentieth century.

James Johnson Battersby (1875–1949) was a British hat manufacturer. He was one of seven brothers, a number of whom worked in the family firm of Battersby Hats which at one time was one of the largest hat manufacturers in Britain. In 1915, he was the last survivor to be rescued after the RMS Lusitania was hit by a German torpedo and sunk. His son was the British fascist James Larratt Battersby.

The Iris Publishing Company were a small publishing company located at 30 and 31 Furnival Street, London, in the late nineteenth century and the early years of the twentieth century. They were associated with The Chichester Press and specialised in publishing translations of foreign language works into English.

Ladybellegate Street is a street in Gloucester that runs from Longsmith Street in the north to Commercial Road in the south. It is joined only by Blackfriars on its eastern side. The former Blackfriars monastery is located on the eastern side of the street together with three grade II* listed town houses and the former premises of Talbots Bottlers.

George William Potter was a builder, estate agent and surveyor in Hampstead, London, whose firm contributed to the modern development of Hampstead and Hampstead Garden Suburb. As a builder, he constructed the houses in Gayton Crescent and Gayton Road. Late in life he wrote two books of recollections of the history of Hampstead. 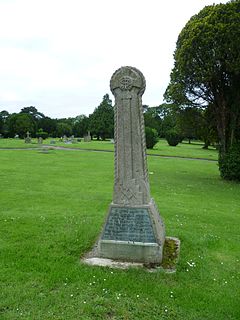 James Medland was county surveyor for Gloucestershire from 1857–89 in which capacity he designed many of Gloucester's public buildings such as the grade II listed Tredworth Road Cemetery chapel (1857).

Thomas Fulljames FRIBA was an architect active in Gloucestershire, England, in the first half of the nineteenth century. As diocesan surveyor from 1832 until 1870, latterly in partnership with Frederick Sandham Waller, he designed, reconstructed or extended a number of churches in Gloucestershire.

Stanley Spooner, was an editor and journalist. He was originally the creator and editor of an automobile journal called The Automotor And Horseless Vehicle Journal. This became known as The Automotor Journal, from April 1902. In January 1909, he was the creator and editor of the first aeronautical weekly magazine in the world called Flight, now titled Flight International. After the success of Flight, his Automotor Journal was renamed The Auto.

Albert Estcourt was a builder in Gloucestershire, England, in the 19th century who with his brother, and later on his own, constructed a number of notable buildings in the county and across southern England.

Commercial Road is located in the City of Gloucester, England. It runs from The Quay and Severn Road in the north to Kimbrose Way and Southgate Street in the south. It is joined by Barbican Road and Ladybellegate Street on the north side and by entrances to Gloucester Docks on the south side.

James Philcox was an English land speculator and property developer in the 1840s and 1850s in the colony of South Australia. He is credited with naming the inner eastern Adelaide suburb of Marryatville as well as the outer northern suburb of Evanston. He returned to England to retire in Sussex in 1853.

James Burrell Smith (1822-1897) was a watercolour and landscape artist. He was born in London. In 1843 he moved to Alnwick, Northumberland where he trained with Thomas Miles Richardson. He travelled around the UK and Europe. In the 1880s he created some engravings for The Illustrated London News.