Today, it is far more common for mineral water to be bottled at the source for distributed consumption. Travelling to the mineral water site for direct access to the water is now uncommon, and in many cases not possible because of exclusive commercial ownership rights. There are more than 4,000 brands of mineral water commercially available worldwide. [1]

In many places the term "mineral water" is colloquially used to mean any bottled carbonated water or soda water, as opposed to tap water.

The U.S. Food and Drug Administration classifies mineral water as water containing at least 250 parts per million total dissolved solids (TDS), originating from a geologically and physically protected underground water source. No minerals may be added to this water. [3]

In the European Union, bottled water may be called mineral water when it is bottled at the source and has undergone no or minimal treatment. [4] Permitted is the removal of iron, manganese, sulfur and arsenic through decantation, filtration or treatment with ozone-enriched air, in so far as this treatment does not alter the composition of the water as regards to the essential constituents which give it its properties. No additions are permitted except for carbon dioxide, which may be added, removed or re-introduced by exclusively physical methods. No disinfection treatment is permitted, nor is the addition of any bacteriostatic agents.[ citation needed ] 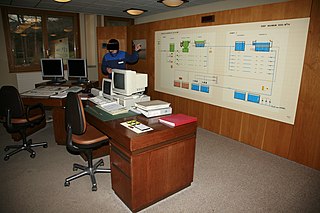 Water purification is the process of removing undesirable chemicals, biological contaminants, suspended solids, and gases from water. The goal is to produce water fit for specific purposes. Most water is purified and disinfected for human consumption, but water purification may also be carried out for a variety of other purposes, including medical, pharmacological, chemical, and industrial applications. The methods used include physical processes such as filtration, sedimentation, and distillation; biological processes such as slow sand filters or biologically active carbon; chemical processes such as flocculation and chlorination; and the use of electromagnetic radiation such as ultraviolet light. 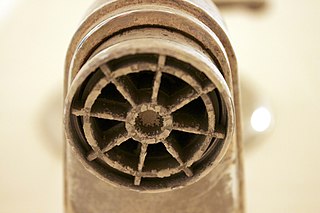 Hard water is water that has high mineral content. Hard water is formed when water percolates through deposits of limestone, chalk or gypsum which are largely made up of calcium and magnesium carbonates, bicarbonates and sulfates. 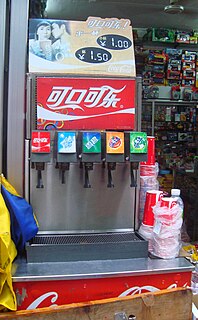 A soda fountain is a device that dispenses carbonated soft drinks, called fountain drinks. They can be found in restaurants, concession stands and other locations such as convenience stores. The device combines flavored syrup or syrup concentrate and carbon dioxide with chilled and purified water to make soft drinks, either manually, or in a vending machine which is essentially an automated soda fountain that is operated using a soda gun. Today, the syrup often is pumped from a special container called a bag-in-box (BiB).

Mineral springs are naturally occurring springs that produce water-containing minerals, or other dissolved substances, that alter its taste or give it a purported therapeutic value. Salts, sulfur compounds, and gases are among the substances that can be dissolved in the spring water during its passage underground. 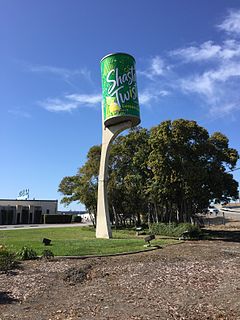 Shasta Beverages is an American soft drink manufacturer that markets a value-priced soft drink line with a wide variety of soda flavors, as well as a few drink mixers, under the brand name Shasta. The company name is derived from Mount Shasta in northern California and the associated Shasta Springs.

Purified water is water that has been mechanically filtered or processed to remove impurities and make it suitable for use. Distilled water was, formerly, the most common form of purified water, but, in recent years, water is more frequently purified by other processes including capacitive deionization, reverse osmosis, carbon filtering, microfiltration, ultrafiltration, ultraviolet oxidation, or electrodeionization. Combinations of a number of these processes have come into use to produce ultrapure water of such high purity that its trace contaminants are measured in parts per billion (ppb) or parts per trillion (ppt). 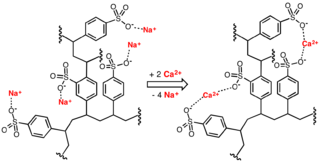 Water softening is the removal of calcium, magnesium, and certain other metal cations in hard water. The resulting soft water requires less soap for the same cleaning effort, as soap is not wasted bonding with calcium ions. Soft water also extends the lifetime of plumbing by reducing or eliminating scale build-up in pipes and fittings. Water softening is usually achieved using lime softening or ion-exchange resins but is increasingly being accomplished using nanofiltration or reverse osmosis membranes.

Gerolsteiner Brunnen GmbH & Co. KG (Gerolsteiner) is a leading German mineral water firm with its seat in Gerolstein in the Eifel mountains. The firm is well-known for its Gerolsteiner Sprudel brand, a bottled, naturally carbonated mineral water. This water, in addition to hydrogen and oxygen (H2O) and carbon (in the carbon dioxide (CO2) carbonation), contains the following chemical elements in, at least, the amounts of 100 or more micrograms per liter: bromine, calcium, chlorine, fluorine, lithium, magnesium, manganese, nitrogen, potassium, silicon, sodium, strontium, and sulfur. The strontium is naturally occurring, not the radioactive strontium-90. Gerolsteiner was also the chief sponsor of Team Gerolsteiner a cycling team.

Sulfur water is a condition where water is exposed to hydrogen sulfide gas, giving a distinct "rotten egg" smell. This condition has different purposes in culture varying to health and implications to plumbing.

Total dissolved solids (TDS) is a measure of the dissolved combined content of all inorganic and organic substances present in a liquid in molecular, ionized, or micro-granular suspended form. TDS concentrations are often reported in parts per million (ppm). Water TDS concentrations can be determined using a digital meter.

Selters is a German brand of natural mineral water sourced from wells in the area of Selters in Hesse, at the Taunus mountains. The water has been known since the Bronze Age and famous as a natural soda water because of its high concentration of sodium bicarbonate, "soda". The Selters water also contains raised levels of calcium, chloride, magnesium, sulfate and potassium ions. The water is naturally carbonated, over 250 mg/l, but sold in both sparkling and still versions. 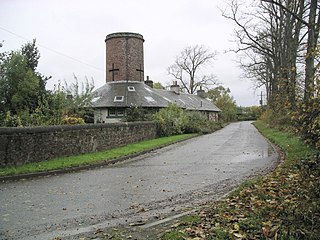 Pitkeathly Wells is a hamlet in the Perth and Kinross area of Scotland, famed for its mineral water. The water was recommended for health during the 19th century, and was bottled for sale, sometimes carbonated. In 1910, Schweppes took over bottling the water, however, they shut down production after a fire.

Egerszalók is an open-air spa and village located in Heves County in northeastern Hungary. The springs yield 68 °C. mineral water from an aquifer located under the volcanic Mátra Mountains. The spa is located 8 km west of the county seat of Eger, from which it is served by motorbus. Egerszalok lies 133 km from Budapest, in the Laskó stream valley between the Mátra and Bükk ranges. The village can be easily reached from the M3 highway.

The Lukács Thermal Bath is a historic indoor/outdoor thermal bath spa in Budapest, Hungary, heated naturally by hotsprings. It can be used by men and women everyday, however the swimming pools have historical names such as men swimming pool and women swimming pool. There are ticket with lockers or cabins. All pools and 4 saunas can be used by all ticket basically. The only optional area is the sauna world, which contains 5 more extra saunas, ice cooling pool, igloo and heated roman bench. There are sauna nights in this bath on fridays of every even week from 20:00 to 02:00.

Sairme is a brand of naturally carbonated mineral water from springs of Sairme balneological resort area in Imereti region.