Vancaeyezeele played for the youth sides of Stade Malherbe Caen of Ligue 1. For the 2011–12 season he was promoted to the reserve side, making one appearance in the Championnat National 2. For the 2013–14 season, he transferred to Hérouvillais of the Championnat National 3. During the season he made 21 appearances, scoring a single goal. [1] In February 2015, he signed on for a stint with CD Vitoria of Spain's Fifth Division. He made his debut for the club on 23 February against CD El Pilar Marianistas. [2]

In 2015, Vancaeyezeele traveled to the United States to play college soccer for the Charleston Golden Eagles of the University of Charleston. Over his two season with the club, he made 41 appearances, scoring five goals. [3] The team won the school's first NCAA Division II Championship during the 2017 season, defeating the Lynn Fighting Knights 3–1 in the final. Following the match, Vancaeyezeele was named the NCAA Division II Player of the Year, in addition to several other accolades. [4]

In 2016, Vancaeyezeele played club football for the SW Florida Adrenaline of the semi-professional Premier Development League. [5] Over the course of the season, he made ten regular season appearances, scoring one goal. [6] For the 2017 season, Vancaeyezeele moved to the Mississippi Brilla, also of the PDL. During the season, he made 14 regular season appearances, scoring two goals, and a further three appearances in the playoffs. [7]

After graduation from the University of Charleston, Vancaeyezeele was invited to participate in the 2018 Major League Soccer Combine. [8] However, he was not selected in the 2018 MLS SuperDraft, [9] despite being projected as a potential early pick. [10]

In March 2018, Vancaeyezeele went on trial with Pittsburgh Riverhounds SC of the United Soccer League, the second tier of the United States soccer league system. He made two preseason appearances for the team, including one against league rivals Penn FC in which he set up Romeo Parkes's game-winning goal. On 14 March 2018, he was signed to a one-year contract with a club option for an additional year. [11] He made his professional debut in the opening match of the 2018 season, a 0–0 draw at Nashville SC in which he started and played the full 90 minutes. [12] Over the first two matches of the season, Vancaeyezeele maintained the team's highest passing percentage in the offensive half and the team lead in interceptions. [13]

Vancaeyezeele scored his first professional goal on 20 April 2018, Pittsburgh's second goal of a 2–2 draw away at FC Cincinnati. [14] He was then named to the USL Team of the Week for the first time for his performance in the match. [15] Vancaeyezeele scored his first U.S. Open Cup goal in a 2–1 victory over Erie Commodores FC on 16 May 2018. [16]

During his first season with the club, he made a team-high 32 starts, scoring two league goals. On 7 December 2018 it was announced that Vancaeyezeele had signed a one-year extension with the team with a club option for an additional year. [17]

On May 26, 2022, the Tampa Bay Rowdies announced that they had acquired Vancaeyezeele from Birmingham Legion for an international slot and an undisclosed fee. [20]

Vancaeyezeele was called up to by French Guiana for the first time in September 2019 for 2019–20 CONCACAF Nations League B matches against Belize and St. Kitts and Nevis. He qualifies to represent the nation through family ties. [21] [22] After French Guiana was awarded a 3–0 victory over Belize when the visitors did not arrive in time for the match, [23] Vancaeyezeele made his debut, starting and playing the full match, in the eventual 2–2 draw with St. Kitts and Nevis. [24]

Pittsburgh Riverhounds SC is an American professional soccer team based in Pittsburgh, Pennsylvania. Founded in 1999 and beginning play in 1999, the club plays in the Eastern Conference of the USL Championship, the second tier of the American soccer pyramid. Since 2013, the Riverhounds have played their home games at the 5,000-seat Highmark Stadium, a soccer-specific stadium located in Station Square. Their current head coach is Bob Lilley. Saint Lucian international David Flavius currently holds the club records for most appearances and goals which he set over his eight seasons with the Riverhounds between 1999 and 2006. In June 2017, the Riverhounds entered into a developmental partnership with the Ocean City Nor'easters of the Premier Development League, running through the 2018 season.

Rob Vincent is a former English footballer. He is also a coach at the Pittsburgh Riverhounds Academy.

Dominic Oduro is a Ghanaian professional footballer who plays for Charleston Battery in the USL Championship.

Lebogang "Lebo" Moloto is a South African soccer player who currently plays for FC Tulsa in the USL Championship.

Max Touloute is a Haitian footballer who last played for Florida Tropics SC in the Major Arena Soccer League.

Nick Kolarac is a professional American soccer player who plays for Pittsburgh Hotspurs in the National Premier Soccer League. He played in two different professional leagues in the United States including the USL and MASL. Kolarac also played in the top 2 development leagues in the America the PDL and NPSL.

Marshall Hollingsworth is an American retired soccer player who played as a midfielder and fullback. After graduating from Wheaton College, he played professionally for Columbus Crew SC, Pittsburgh Riverhounds, and Lansing Ignite.

Chevaughn Junior Hugh Walsh is a Jamaican footballer who plays as a forward. 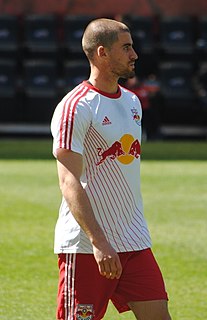 Ethan Henry Kutler is an American professional soccer player who plays as a midfielder. 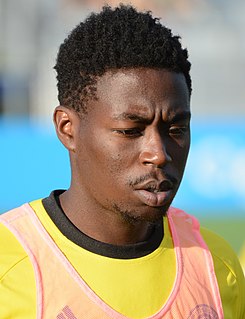 William Emmanuel Jordan Dover is a footballer who plays as a defender for League1 Ontario club Simcoe County Rovers. Born in Canada, he represents Guyana internationally.

The 2018 Pittsburgh Riverhounds SC season was the club's nineteenth season of existence, and their eighth consecutive season in the United Soccer League, the second tier of American soccer. Pittsburgh also competed in the U.S. Open Cup. The season covered the period from October 15, 2017 to the beginning of the 2019 USL season.

Pittsburgh Riverhounds SC is an American professional soccer team based in Pittsburgh, Pennsylvania. Founded in 1998 and beginning play in 1999.

Noah Franke is an American soccer player who currently plays for Greenville Triumph SC in USL League One.

Benjamin Cunningham Lundgaard is an American professional soccer player who plays as a goalkeeper. He previously appeared at the semi-professional level for Fresno Fuego and New York Red Bulls U-23 and spent time with Columbus Crew SC, Indy Eleven, Pittsburgh Riverhounds SC, and Atlanta United 2 at the professional level.

The 2019 Pittsburgh Riverhounds SC season is the club's twentieth season of existence, their second consecutive season in the second tier of American soccer, and their ninth season in the league now named the USL Championship. The season covers the period from October 21, 2018 to the beginning of the 2020 USL Championship season. Bob Lilley returns for his second season as Riverhounds manager.

Danny Vitiello is an American soccer player who plays as an goalkeeper for USL Championship club Sacramento Republic. 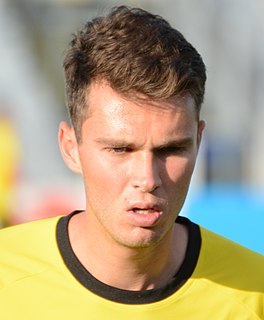 Thomas "Tommy" Williamson is an American professional soccer player who plays as a forward.

Casey Bartlett-Scott is an English semi-professional footballer who plays as a defender for Fareham Town.