Thomas Verhaar (born 8 March 1988) is a Dutch professional footballer who plays as a winger for Excelsior. [1]

Thomas Berthold is a former German footballer and manager, who played as a defender. He currently works as a pundit and analyst for several TV stations.

Thomas Dossevi is a retired Togolese footballer who played as a striker or as winger. 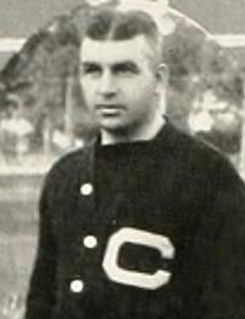 Edward Thomas MacDonnell was an American football, basketball, and baseball coach. He served as the head football coach at Louisiana State University (LSU) from 1914 to 1916 and at Wake Forest University for one season in 1917, compiling a career college football record of 15–13–2. MacDonnell was also the head basketball coach at Wake Forest for the 1917–18 season, tallying a mark of 4–12, and the school's head baseball coach in the spring of 1918, notching a record of 9–3. MacDonald was an alumnus of Colgate University, graduating in 1910. He was a member of Phi Gamma Delta.

Thomas Reis is a German reitred footballer and current manager of VfL Bochum.

Aleksandr Moiseyevich Nekrich, 3 March 1920, Baku – 2 September 1993, Boston) was a Soviet Russian historian. He emigrated to the United States in 1976. He is known for his works on the history of the Soviet Union, especially under Joseph Stalin’s rule.

Veniamin Grigorievich (Benjamin) Levich was a Soviet dissident, internationally prominent physical chemist, electrochemist and founder of the discipline of physico-chemical hydrodynamics. He was a student of the theoretical physicist, Lev Landau. His landmark textbook titled Physicochemical Hydrodynamics is widely considered his most important contribution to science. The Levich equation describing a current at a rotating disk electrode is named after him. His research activities also included gas-phase collision reactions, electrochemistry, and the quantum mechanics of electron transfer.

Thomas G. Wyllie was a Scottish football player, who played for Rangers and represented Scotland once.

Mikhail Alexandrovich Leontovich was a Soviet dissident, Soviet physicist, member of USSR Academy of Sciences, specializing in plasma and radiophysics.

Komering is a Malayo-Polynesian language spoken in Indonesia, in the southern part of Sumatra.

Thomas Meißner is a German footballer who plays for Puskás Akadémia FC in the Hungarian Nemzeti Bajnokság I. 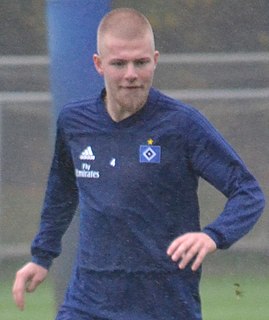 Rick van Drongelen is a Dutch footballer who plays as a centre-back for 2. Bundesliga side Hamburger SV.

Thomas Silberberger is an Austrian football manager and former footballer who played as a midfielder. He is the manager of WSG Wattens.

Thomas Kok, is a Dutch professional footballer who plays as a midfielder for FC Dordrecht.

Volharding Olympia Combinatie (VOC) is a cricket and association football club from Rotterdam, Netherlands. Its home ground is Sportpark Hazelaarweg in Hillegersberg-Schiebroek.