Thoothukudi is a 2006 Indian Tamil-language gangster film set in the Thoothukudi district of Tamil Nadu directed by Sanjay Ram. The film starred Harikumar, a prominent dance choreographer in Tamil films, in the lead role alongside Karthika and Rahman.

The film marked the acting debut of dance choreographer Harikumar and actress Karthika in leading roles. [2] [3] [4] [5] [6] [7] Karthika was cast in the film after the makers had spotted her in a commercial. [8] The relative success of the film prompted Karthika to be labelled as 'Thootukudi' Karthika or 'Karuvappaiya' Karthika by the media. [9] [10] Harikumar and Karthika worked together again in Madurai Sambavam (2009). [11]

Pravin Mani composed the songs and scored the background music. [12] The song "Karuvappaiya" from the song garnered popularity prior to release, with actress Karthika's display in the song noted. [13] [14] [15] Following the album, Pravin and Harikumar came together again for their next venture, Thirutham. [16]

Sify gave the film a negative review and wrote that "On the whole, the script is wafer thin, there is no logic and is too dark and morbid". [18] [19] Malini Mannath of Chennai Online noted that "Though it's a predictable storyline, the director has attempted to bring in slight variations and the film does have its interesting moments and elements". [1] The film performed well at the box office, with director Sanjay Ram receiving more offers to work on films. [20] [21] 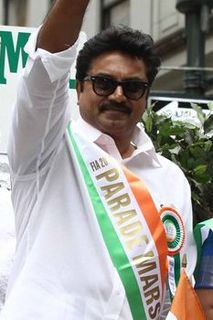 Sarathkumar Ramanathan is an Indian actor, politician, filmmaker, and singer. He has acted in more than 130 Tamil, Telugu, Malayalam and Kannada films. He has won two Tamil Nadu State Film Awards and three Filmfare Awards South.

Karthika Adaikalam, better known mononymously as Karthika, is an Indian actress who has appeared in Tamil films. She is probably best known for her performances in Thoothukudi and Raman Thediya Seethai.

Madurai Sambavam is a 2009 Tamil language action film written and directed by Youreka. It stars Harikumar, Anuya Bhagvath and Karthika, while Radha Ravi, Dhandapani, and Raj Kapoor play supporting roles. The music was composed by John Peter with cinematography by M. Sukumar and editing by P. Sai Suresh. The film released on 4 September 2009.

Harikumar is an Indian actor and director, who has appeared in Tamil films. He is probably best known for his performance in his debut Thoothukudi (2006) and Madurai Sambavam (2009). Moreover, he has appeared as a choreographer in over 100 films.

Sanjay Ram is an Indian film director and producer who has worked on Tamil films and was active in the late 2000s. Throughout his career, he worked on several films which failed to have a theatrical release. Furthermore, several of his films have been criticised for their gore content and excessive bloodshed on screen.

Charles Shafiq Karthiga is a 2015 Tamil thriller film directed by S. Sathiyamoorthy. The film stars Sharran Kumar and Jai Quehaeni in the lead roles while Mishal, Narayan and Vimal among others form an ensemble cast. Music for the film was composed by Sidhartha Mohan and the film opened to positive reviews in March 2015.

Youreka is an Indian film director, lyricist and screenwriter who has worked on Tamil films.

Unnodu Oru Naal is a 2013 Indian Tamil-language romantic thriller film directed by Durai Karthikeyan and starring Arjun Vijayraghavan, Gibran and Neelam. The film is inspired by the American film Unfaithful (2002). The Tamil film Ner Ethir (2014) has a similar storyline. 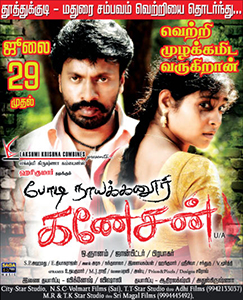 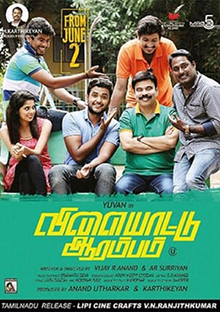 Vilayattu Aarambam is a 2017 Indian Tamil-language action thriller film directed by Vijay R Anand and AR Suriyan and starring Yuvan and Shravya. The film is based on a true story regarding the collapse of a MLM company.

Kaadhal 2014 is a 2014 Indian Tamil-language romantic drama film directed by Suganthan and starring Harish, Neha, and Manikandan. The film is about female empowerment. Boys Manikandan debuted as a villain with this film.

Thoppi (transl. Hat) is a 2015 Indian Tamil language drama film directed by Youreka and starring Murali Ram, Raksha Raj and G. M. Kumar. The film is about a man with a criminal background who aspires to be a cop.

Sembattai is a 2012 Indian Tamil-language drama film directed by I. Ganesh and starring Dhileepan, Sreejit and Gowri Nambiar.

Chikkiku Chikkikkichu is a 2015 Indian Tamil-language romantic comedy film directed by N Rajesh Kumar and starring Mithun and Mrudula Murali. The film takes place on a train from Chennai to Nagercoil.

Aadu Puli Aattam is a 2006 Indian Tamil-language action film directed by Sanjay Ram and produced by Opa Creations. The film stars Mani Prakash, Vennila and Rekasri. It was released on 15 December 2006.