Thorncliffe Park Raceway was a Toronto-area racetrack that operated from 1917 until 1952. It was located east of Millwood Road, south of Eglinton Avenue East and the CPR's railroad tracks. It was the first home of the Prince of Wales Stakes. The name is retained today by the Thorncliffe Park neighbourhood.

The site of Thorncliffe Park Raceway was originally owned by John Taylor and members of the Taylor family, who established mills, a brewery and a brickyard along the Don River (Ontario). Robert T. Davies, the wealthy founder of the Dominion Brewing Company and related to the Taylor family by marriage, acquired the property in the late 19th century and renamed it Thorncliffe Farm. The name of the farm, and later the racetrack, was inspired by Thorn Cliff, a house built on the west side of the Don River by a member of the third generation of the Taylor family. [2]

An avid participant in horse racing, under the banner of Thorncliffe Stable, Davies raced both thoroughbred and standardbred horses. After his death in 1916, Davies' estate sold the property to a group of investors from Baltimore, Maryland who built a horse racetrack. The track had a simple but small grandstand structure (and covered area) on the northside of the track, stables to the northeast and more stables and parking at the northwest side. Home to thoroughbred horse racing, the track also revitalized harness racing in Toronto following its opening on July 21, 1917. Among its thoroughbred races, the track notably hosted the Prince of Wales Stakes, the My Dear Stakes, and the Clarendon Cup.

On June 5, 1937, W. A. Hewitt was one of the stewards which ordered a rerun, after the race was declared a false start when one horse was missing from its stall and the flag had not been dropped when other horses jumped the barrier. The decision was protested by spectators who stood to lose bets placed on the race, and an angry mob occupied the track for more than two hours in a near-riotous protest. [3]

The track operated until 1952 when it was sold to the Ontario Jockey Club. Thoroughbred racing ended on June 23, 1952, followed by harness racing on August 12, 1953. The property was immediately transferred to a land development company, called Thorncliffe Park Limited. The neighbouring Town of Leaside annexed the nearly 400-acre former raceway in 1954 and demolished it to make way for the planned community of Thorncliffe Park. [4] [5]

Today, the old racetrack site is commemorated by local streets called Thorncliffe Park Drive, Grandstand Place, and Milepost Place, as well as a number of residential buildings that took on racetrack stable names like Churchill, Maple Glen, and Willow Glen. Thorncliffe's Leaside Park and a wooded area cover the area to the south of the original racetrack.

The Meadowlands Racetrack is a horse racing track at the Meadowlands Sports Complex in East Rutherford, New Jersey, United States. The track hosts both thoroughbred racing and harness racing. It is known popularly in the region as "The Big M". Meadowlands has year-round horse racing as well as a number of bars and restaurants.

Thorncliffe Park is a neighbourhood in Toronto, Ontario, Canada, in the former Borough of East York.

The Prince of Wales Stakes is a Canadian Thoroughbred horse race run annually at Fort Erie Race Track in Fort Erie, Ontario. Restricted to only three-year-old horses bred in Canada, it is contested on dirt over a distance of 1+3⁄16 miles. In 1959, the Prince of Wales Stakes became the second race in the Canadian Triple Crown series. It follows the June running of the Queen's Plate and precedes the Breeders' Stakes in August.

Woodbine Entertainment Group (WEG), known as the Ontario Jockey Club from 1881 to 2001, operates two horse racing tracks, a casino and off-track betting stations in the Greater Toronto Area of Ontario, Canada. It also owns and operates the Canadian digital television service HPItv and operates Canada's only online wagering platform for horse racing, HorsePlayer Interactive. WEG is responsible for operating Woodbine Racetrack in Toronto, and it also runs Woodbine Mohawk Park in Campbellville, Ontario. It employs over 2,300 people in its operations. WEG also ran the Turf Lounge on Bay Street in Toronto from 2003 to 2015. 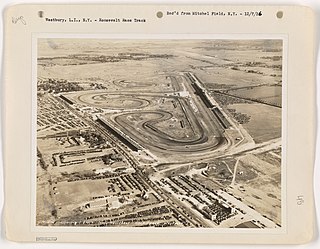 Roosevelt Raceway was a race track located just outside the village of Westbury on Long Island, New York. Initially created as a venue for motor racing, it was converted to a ½-mile harness racing facility. The harness racing facility operated from September 2, 1940 until July 15, 1988. It was the original home of the Messenger Stakes, part of the Triple Crown of Harness Racing for Pacers. The raceway hosted the event until it closed. It was also the first track to use the now universal "mobile starting gate". The operation was sold in 1984 on the condition it was to remain an operating racetrack, but the facilities deteriorated, attendance dropped off, and the plant was no longer profitable.

Bull Page was a Canadian Hall of Fame Thoroughbred racehorse and an important sire.

The Clarendon Stakes is a Thoroughbred horse race currently run annually at Woodbine Racetrack in Toronto, Ontario, Canada. Held in early July, the sprint race is open to two-year-old horses foaled in the Province of Ontario and is contested over a distance of five and a half furlongs on Polytrack synthetic dirt. It currently offers a purse of $150,000.

The My Dear Stakes is a Canadian Thoroughbred horse race run annually in late June at Woodbine Racetrack in Toronto, Ontario. Open to two-year-old fillies, it is contested over a distance of five furlongs on Polytrack and currently carries a purse of approximately $101,000 +. 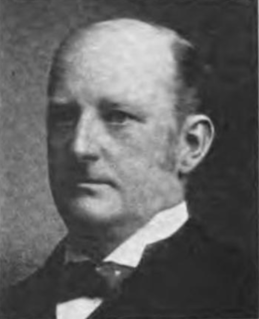 Robert T. Davies was a Canadian businessman, as well as a Thoroughbred and Standardbred racehorse owner and breeder.

Thorncliffe Stable is a defunct Thoroughbred and Standardbred horse racing and breeding operation established in 1888 in Toronto, Ontario by businessman Robert T. Davies. The stable was based at Davies' Thorncliffe Farm in the Don River Valley in what is now known as Thorncliffe Park.

The Detroit Race Course was a complex in Livonia, Michigan, a suburb northwest of Detroit and part of the metropolitan area. It consisted of a regulation racing track and associated stables for horses, and facilities for trainers, exercise workers, and jockeys. It was opened in 1950 primarily as a venue for racing thoroughbreds. The track owners also leased the complex to Wolverine Raceway for Standardbred harness racing events. The large complex had stables with a capacity for 1200 horses. 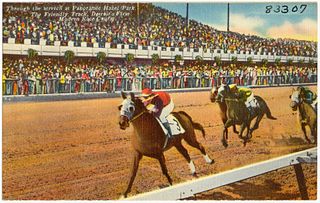 Hazel Park Raceway, located in Hazel Park, Michigan, in the metropolitan Detroit area, was a horse race track. From 1949 it offered live thoroughbred racing every Friday and Saturday night May through mid-September, and also offered harness racing. Beginning in 1996, it offered simulcast wagering seven days a week all year long on thoroughbred and harness races from across the US and Canada. Admission and parking were free. For a period, this was the only track in Michigan to offer live thoroughbred racing.

Rosecroft Raceway, nicknamed the "Raceway by the Beltway" for being close to Interstate 495, is a harness racing track in Fort Washington, Maryland. It first opened in 1949 and was owned by William E. Miller, a horse trainer and breeder. Rosecroft quickly became Prince George's County's political and social center, drawing thousands of people there each racing day. In the early 1950s, average attendance was more than 7,000 per day. After Miller died in 1954, his son John owned Rosecroft until his death in 1969. Rosecroft hosted memorial stake races annually for both William and John until 1995. Following the death of John Miller, Earle Brown controlled operations until he moved to a different position in 1980; William E. Miller II took over following Brown.

Freestate Raceway was a horse racing track in Maryland. It opened in 1948 and closed in 1990.

Abraham "Abe" Michael Orpen was a Canadian businessman, best known for his ownership of several horse-racing tracks in Ontario, Canada. Born in Toronto, Orpen first worked as a carpenter, became a hotel keeper, owned several construction-related businesses, then branched into horse-racing. He owned the Dufferin Park Racetrack, Hillcrest Racetrack and Long Branch Racetrack, and was a partner in the Kenilworth Park Racetrack at Windsor, Ontario, and the Thorncliffe Park Raceway in Leaside, Ontario. Orpen was well known as a facilitator of gambling, first at his hotel, and eventually at a casino in Mimico, Ontario. After his death, his family continued the horse-racing businesses until the 1950s, when they sold their tracks during a time of consolidation of racetracks in Ontario.