The Thornton Wilder Prize for Translation, established in 2009, is awarded by the American Academy of Arts & Letters to a practitioner, scholar or patron who has made a significant contribution to the art of literary translation. It was established by Tappan Wilder and Catharine Wilder Guiles, the nephew and niece of Academy member Thornton Wilder (1897–1975), and given for the first time in 2009. [1]

Thornton Niven Wilder was an American playwright and novelist. He won three Pulitzer Prizes — for the novel The Bridge of San Luis Rey and for the plays Our Town and The Skin of Our Teeth — and a U.S. National Book Award for the novel The Eighth Day.

Henri Cole is an American poet, who has published many collections of poetry and a memoir. His books have been translated into French, Spanish, Italian, German, and Arabic.

Lorrie Moore is an American writer.

The American Academy of Arts and Letters is a 300-member honor society whose goal is to "foster, assist, and sustain excellence" in American literature, music, and art. Its fixed number membership is elected for lifetime appointments. Its headquarters is in the Washington Heights neighborhood of Manhattan in New York City. It shares Audubon Terrace, a Beaux Arts/American Renaissance complex on Broadway between West 155th and 156th Streets, with the Hispanic Society of America and Boricua College.

Bill Porter is an American author who translates under the pen-name Red Pine. He is a translator of Chinese texts, primarily Taoist and Buddhist, including poetry and sūtras. In 2018, he won the American Academy of Arts & Letters Thornton Wilder Prize for translation. 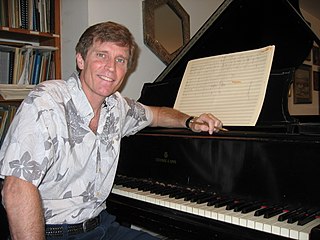 Frank Ticheli is an American composer of orchestral, choral, chamber, and concert band works. He lives in Los Angeles, California, where he is a Professor of Composition at the University of Southern California. He was the Pacific Symphony's composer-in-residence from 1991 to 1998, composing numerous works for that orchestra. A number of his works are particularly notable, as they have become standards in concert band repertoire. 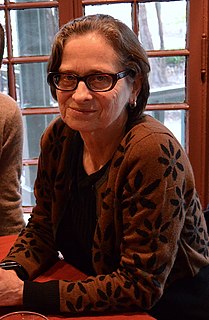 Caroline Walker Bynum, FBA is a Medieval scholar from the United States. She is a University Professor emerita at Columbia University and Professor emerita of Western Medieval History at the Institute for Advanced Study in Princeton, New Jersey. She was the first woman to be appointed University Professor at Columbia. She is former Dean of Columbia's School of General Studies, served as President of the American Historical Association in 1996, and President of the Medieval Academy of America in 1997–1998.

Edmund Leroy "Mike" Keeley was an American novelist, translator, and essayist, a poet, and Charles Barnwell Straut Professor of English at Princeton University. He was a noted expert on the Greek poets C. P. Cavafy, George Seferis, Odysseus Elytis, and Yannis Ritsos, and on post-Second World War Greek history.

Sanford Biggers is a Harlem-based interdisciplinary artist who works in film/video, installation, sculpture, music, and performance. An L.A. native, he has lived and worked in New York City since 1999.

Nina C. Young is an American electro-acoustic composer of contemporary classical music who resides in New York City. She won the 2015 Rome Prize in musical composition, a 2021 Guggenheim Fellowship, and a 2014 Charles Ives Prize from the American Academy of Arts and Letters.

Timothy M. Frye is an American political scientist. He is the Marshall D. Shulman Professor of Post-Soviet Foreign Policy and Chair of the Department of Political Science at Columbia University, and the author of several books about Russia.

Christopher Trapani is an American/Italian composer of contemporary classical music. In 2007 he won the Gaudeamus Award of the Dutch Gaudeamus Foundation. A CD of his music, Waterlines, was released in 2018. A second release of Waterlines by the ICTUS Ensemble was named one of the top 5 classical releases of 2020 by De Standaard. In 2021–2022 he was a visiting assistant professor at the Thornton School of Music of the University of Southern California.