The Thorold Tunnel is an underwater tunnel in Thorold, Ontario, Canada carrying Highway 58 underneath the Welland Canal. Built between 1965 and 1967, the tunnel is 840 metres in length and consists of two separate tubes each containing two lanes of traffic. The westbound tube has a sidewalk for pedestrians. [1]

It is one of three tunnels under the Welland Canal (the other two being the Main Street and Townline Tunnels in Welland), and the only tunnel to be constructed after the waterway opened. [1]

The Main Street Tunnel, located in Welland, Ontario, Canada, is an underwater tunnel, carrying Niagara Road 27 and the unsigned designation of Highway 7146 under the Welland Canal. It is named as a part of East Main Street.

The Townline Tunnel is an underwater tunnel in Welland, Ontario, Canada carrying Highway 58A as well as the Canadian Pacific Railway under the Welland Canal. 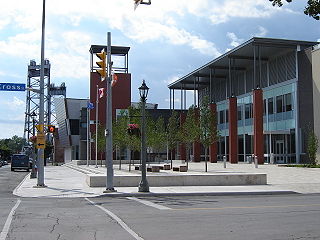 The tunnel has been used as a filming location due to its relatively low traffic levels, including for the television series American Gothic and the movie Highwaymen . [2]

American Gothic is an American mystery drama television series created by Corinne Brinkerhoff. CBS announced a 13-episode straight-to-series order on October 9, 2015. The show premiered on June 22, 2016. On October 17, 2016, CBS cancelled the series after one season.

Due to repair work on the tunnel's ceiling tiles, the Ontario Ministry of Transportation began daily closures of the westbound tube in April 2018 outside of morning rush hour. [3] The repairs are an interim measure and a tender for full rehabilitation of the tunnel was issued by the Ministry on April 4, 2018. [4] 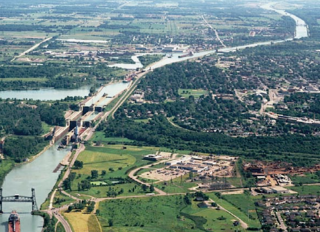 The Welland Canal is a ship canal in Ontario, Canada, connecting Lake Ontario and Lake Erie. It forms a key section of the St. Lawrence Seaway and Great Lakes Waterway. Traversing the Niagara Peninsula from Port Weller to Port Colborne, it enables ships to ascend and descend the Niagara Escarpment and bypass Niagara Falls. 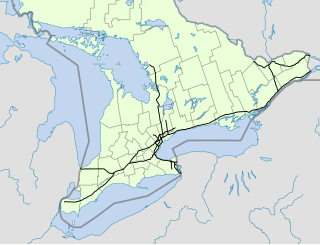 The 400-series highways are a network of controlled-access highways throughout the southern portion of the Canadian province of Ontario, forming a special subset of the provincial highway system. They are analogous to the Interstate Highway System in the United States or the Autoroute system of neighbouring Quebec, but under provincial jurisdiction and regulated by the Ministry of Transportation of Ontario (MTO). Although Ontario had been constructing divided highways for two decades prior, 400-series designations were introduced in 1952. Initially only Highways 400, 401 and 402 were numbered; other designations followed in the subsequent decades.

King's Highway 58, commonly referred to as Highway 58, is a provincially maintained highway in the Canadian province of Ontario. The route is divided into two segments with a combined length of 15.5 km (9.6 mi). The southern segment travels from Niagara Regional Road 3, formerly Highway 3, in Port Colborne, to the Highway 58A junction in the southern end of Welland, a distance of 7.2 km (4.5 mi). The northern segment begins at Highway 20 near Allanburg and travels north and west to a large junction with Highway 406 at the St. Catharines – Thorold boundary, a distance of 8.3 km (5.2 mi). An 18.1 km (11.2 mi) gap separates the two segments within Welland and Pelham. The entire route is located within the Regional Municipality of Niagara. 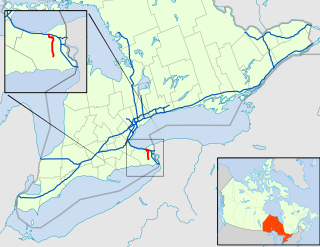 King's Highway 406, commonly referred to as Highway 406, is a 400-series highway in the Canadian province of Ontario. The primary north-south route though the central portion of the Niagara Peninsula, Highway 406 connects Welland, Thorold and downtown St. Catharines to the Queen Elizabeth Way (QEW). 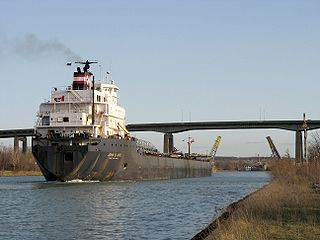 The Garden City Skyway is a major high-level bridge located in St. Catharines and Niagara-on-the-Lake, Ontario, Canada, that allows the Queen Elizabeth Way (QEW) to cross the Welland Canal without the interruption of a lift bridge. Six lanes of traffic are carried across the bridge, which is 2.2 kilometres (1.4 mi) in length and 40 metres (130 ft) at its tallest point. It is the tallest and largest single structure along the entire QEW; the Burlington Bay James N. Allan Skyway, which is also part of the QEW, is actually two separate and smaller four-lane bridges.

Niagara Centre is a federal electoral district in the Niagara Region of Ontario that has been represented in the House of Commons of Canada from 1867 to 1988 and since 1997.

King's Highway 140, commonly referred to as Highway 140, is a provincially maintained highway in the Canadian province of Ontario. The highway connects Port Colborne near Lake Erie with Highway 406 in Welland, via the Main Street Tunnel. It was constructed in the early 1970s as part of the Welland Bypass project of the Welland Canal, which resulted in the severance of several highways and rail lines. Opened to traffic in late 1972, several months following the tunnel, Highway 140 has remained unchanged since, despite growing calls to resign it as an extension of Highway 406.

Port Robinson is a small community in the southernmost part of Thorold, Ontario, Canada. The community is divided in half by the Welland Canal, as there is no bridge in the immediate vicinity to connect the two halves of the community. In the summer, a small free ferry for pedestrians and cyclists runs across the canal. In the winter, residents must use the bridge on Highway 20, which results in a 13.3 km (8.3 mi) trip to get to the other side. 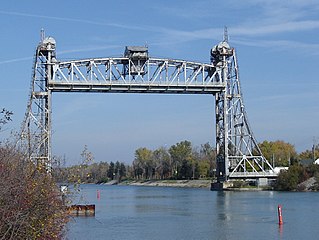 Allanburg is a community within the City of Thorold, Ontario, Canada. It is located on the Welland Canal and Highway 20, both important transportation routes through the Niagara Peninsula. The two cross at a vertical-lift bridge, numbered as Bridge 11 by the Saint Lawrence Seaway Authority, but often known simply as the Allanburg Bridge. The collision of the ship Windoc with the bridge made national news in 2001.

King's Highway 58A, commonly referred to as Highway 58A, is a provincially maintained highway in the Canadian province of Ontario. The short route serves to connect Highway 58 with Highway 140 and passes beneath the Welland Canal through the Townline Tunnel. The entire route is located within the city of Welland in the Regional Municipality of Niagara.

The Montrose Swing Bridge is located on the Welland River at the junction with the Queenston Power Canal in the southeast portion of the City of Niagara Falls, Ontario, Canada. It was built ca. 1910 to carry the Canada Southern Railway over the river. It is a two-track bridge, although only one track remains in use today. It crosses the river at roughly a 45-degree angle.

Niagara Centre is a provincial electoral district in Ontario, Canada, represented from 1867 until 1977 and again since 2007 in the Legislative Assembly of Ontario. Its population in 2006 was 112,875.

The Elizabeth River Tunnels Project, a series of transportation projects in the South Hampton Roads region of Virginia, comprises the rehabilitation of the Downtown and existing Midtown Tunnels, the construction of a new parallel Midtown Tunnel, and the extension of the MLK Freeway/U.S. 58 to I-264. Intended to reduce congestion on area surface streets and arterial roads, the project is being administered by Elizabeth River Crossings (ERC) and Virginia Department of Transportation as part of a 58-year public-private partnership concession that will cost about $2.1 billion (2012) to complete.

Bridge 11, also known as the Allanburg Bridge, is a vertical-lift bridge over the Welland Canal within the City of Thorold and community of Allanburg, Ontario, Canada. The location was used for the groundbreaking ceremony for the canal. It was constructed and completed in 1930. The bridge carries Hwy 20 connecting Niagara Falls to Fonthill.