The Thorpe reaction is a chemical reaction described as a self-condensation of aliphatic nitriles catalyzed by base to form enamines. [1] [2] [3] The reaction was discovered by Jocelyn Field Thorpe.

The Thorpe–Ziegler reaction (named after Jocelyn Field Thorpe and Karl Ziegler), or Ziegler method, is the intramolecular modification with a dinitrile as a reactant and a cyclic ketone as the final reaction product after acidic hydrolysis. The reaction is conceptually related to the Dieckmann condensation. [3]

An aldol condensation is a condensation reaction in organic chemistry in which an enol or an enolate ion reacts with a carbonyl compound to form a β-hydroxyaldehyde or β-hydroxyketone, followed by dehydration to give a conjugated enone. 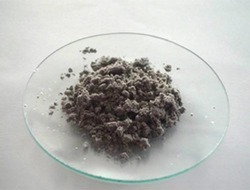 An imine is a functional group or chemical compound containing a carbon–nitrogen double bond. The nitrogen atom can be attached to a hydrogen (H) or an organic group (R). If this group is not a hydrogen atom, then the compound can sometimes be referred to as a Schiff base. The carbon atom has two additional single bonds. The term "imine" was coined in 1883 by the German chemist Albert Ladenburg.

Nitro compounds are organic compounds that contain one or more nitro functional groups (−NO2). The nitro group is one of the most common explosophores (functional group that makes a compound explosive) used globally. The nitro group is also strongly electron-withdrawing. Because of this property, C−H bonds alpha (adjacent) to the nitro group can be acidic. For similar reasons, the presence of nitro groups in aromatic compounds retards electrophilic aromatic substitution but facilitates nucleophilic aromatic substitution. Nitro groups are rarely found in nature, being almost invariably produced by nitration reactions starting with nitric acid.

The Robinson annulation is a chemical reaction used in organic chemistry for ring formation. It was discovered by Robert Robinson in 1935 as a method to create a six membered ring by forming three new carbon–carbon bonds. The method uses a ketone and a methyl vinyl ketone to form an α,β-unsaturated ketone in a cyclohexane ring by a Michael addition followed by an aldol condensation. This procedure is one of the key methods to form fused ring systems. 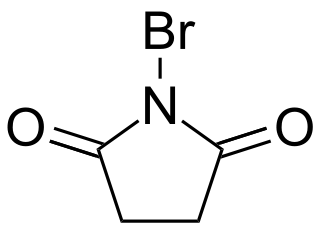 N-Bromosuccinimide or NBS is a chemical reagent used in radical substitution, electrophilic addition, and electrophilic substitution reactions in organic chemistry. NBS can be a convenient source of Br•, the bromine radical.

Acyloin condensation is a reductive coupling of two carboxylic esters using metallic sodium to yield an α-hydroxyketone, also known as an acyloin.

The Claisen condensation is a carbon–carbon bond forming reaction that occurs between two esters or one ester and another carbonyl compound in the presence of a strong base, resulting in a β-keto ester or a β-diketone. It is named after Rainer Ludwig Claisen, who first published his work on the reaction in 1887.

Benzoin is an organic compound with the formula PhCH(OH)C(O)Ph. It is a hydroxy ketone attached to two phenyl groups. It appears as off-white crystals, with a light camphor-like odor. Benzoin is synthesized from benzaldehyde in the benzoin condensation. It is chiral and it exists as a pair of enantiomers: (R)-benzoin and (S)-benzoin.

The Fritsch–Buttenberg–Wiechell rearrangement, named for Paul Ernst Moritz Fritsch (1859–1913), Wilhelm Paul Buttenberg, and Heinrich G. Wiechell, is a chemical reaction whereby a 1,1-diaryl-2-bromo-alkene rearranges to a 1,2-diaryl-alkyne by reaction with a strong base such as an alkoxide.

Clemmensen reduction is a chemical reaction described as a reduction of ketones to alkanes using zinc amalgam and concentrated hydrochloric acid. This reaction is named after Erik Christian Clemmensen, a Danish chemist.

A cyanohydrin reaction is an organic chemical reaction by an aldehyde or ketone with a cyanide anion or a nitrile to form a cyanohydrin. This nucleophilic addition is a reversible reaction but with aliphatic carbonyl compounds equilibrium is in favor of the reaction products. The cyanide source can be potassium cyanide, sodium cyanide or trimethylsilyl cyanide. With aromatic aldehydes such as benzaldehyde, the benzoin condensation is a competing reaction. The reaction is used in carbohydrate chemistry as a chain extension method for example that of D-xylose.

The Strecker amino acid synthesis, also known simply as the Strecker synthesis, is a method for the synthesis of amino acids by the reaction of an aldehyde with ammonium chloride in the presence of potassium cyanide. The condensation reaction yields an α-aminonitrile, which is subsequently hydrolyzed to give the desired amino acid. The method is used commercially for the production of racemic methionine from methional.

The Reissert reaction is a series of chemical reactions that transforms quinoline to quinaldic acid. Quinolines will react with acid chlorides and potassium cyanide to give 1-acyl-2-cyano-1,2-dihydroquinolines, also known as Reissert compounds. Hydrolysis gives the desired quinaldic acid.

The Mukaiyama aldol addition is an organic reaction and a type of aldol reaction between a silyl enol ether and an aldehyde or formate. The reaction was discovered by Teruaki Mukaiyama (1927–2018) in 1973. His choice of reactants allows for a crossed aldol reaction between an aldehyde and a ketone or a different aldehyde without self-condensation of the aldehyde. For this reason the reaction is used extensively in organic synthesis.

The Erlenmeyer–Plöchl azlactone and amino acid synthesis, named after Friedrich Gustav Carl Emil Erlenmeyer who partly discovered the reaction, is a series of chemical reactions which transform an N-acyl glycine to various other amino acids via an oxazolone.

Sir Jocelyn Field Thorpe FRS [1] was a British chemist who made major contributions to organic chemistry.