Thorsten Heins (born 29 December 1957) is a German-Canadian businessman and the former chief executive officer (CEO) of BlackBerry. He stepped down as CEO of BlackBerry and was replaced by John Chen on November 4, 2013. Heins later served as the CEO of Powermat Technologies. [1] [2]

Heins spent 23 years working at Siemens. He served in several positions related to wireless technology including the chief technology officer of Siemens' communications division and several general management roles in hardware and software. [3]

Heins joined Research In Motion (now BlackBerry) in 2007. He rose through the ranks starting as senior vice president of BlackBerry's handheld unit; chief operating officer for product engineering, and finally chief operating officer for product and sales in July 2011. [4] In January 2012, Heins was named to succeed co-founders Jim Balsillie and Mike Lazaridis as president and CEO. During his time as CEO, the company continued to struggle in a rapidly changing market. Heins was responsible for BlackBerry's development of the BlackBerry 10 line of consumer and enterprise devices. In 2012, Heins was named Cantech Letter's 2012 TSX Executive of the Year [5] and ranked a year later as third on a list of the worst CEOs of 2013. [6]

Heins was replaced by John Chen, a veteran Silicon Valley executive, during a November 2013 management shakeup and left the company with a $13.8 million severance. [7] [3] Prem Watsa, the board member who recruited John Chen said, "Thorsten did a very good job given the hand that he was dealt, but resigned because you can’t have two people being in charge. He said to me, ‘It’s very appropriate for me to resign. I like John Chen, but I’m a CEO and there is one person in charge.’" [2]

After leaving BlackBerry in 2013, Heins went on to become the chairman and CEO of Powermat Technologies. During Heins' tenure Powermat secured an agreement from Samsung to incorporate its wireless charging technology into future smartphones. [8]

Heins found himself in the middle of a battle between two factions on Powermat's board. Since October 2015, he and some board members were the target of a lawsuit by other Powermat board members led by founder Ran Poliakane for allegedly running the company without an approved budget. Investors like Goldman Sachs and Hudson Clean Energy backed Heins. Heins and other board members, constituting a majority of the directors, countersued. Heins resigned from Powermat in July 2016. Heins' resignation helped settle the lawsuits just mentioned and allowed for new investment from several important shareholders. [9] Heins had earlier threatened to leave due to what he called a hostile work environment. [10] [11]

As of 2012, Heins served on the board of the German Canadian Chamber of Industry and Commerce in Toronto. [12] As of 2016, Heins serves on the University of Waterloo's board of governors. [13]

Heins was born in Gifhorn, Germany in 1957. He has a graduate diploma in science and physics from the University of Hannover. Heins has a daughter and a son with his wife, Petra. [12] 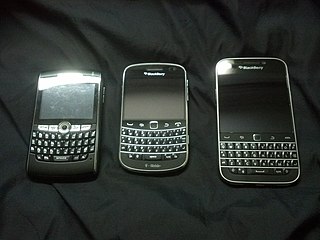 James Laurence Balsillie is a Canadian businessman and philanthropist. He is the former Chair and co-CEO of the Canadian technology company Research In Motion (Blackberry), which at its prime made over $20B in sales annually.

Fairfax Financial Holdings Limited is a financial holding company based in Toronto, Ontario, which is engaged in property, casualty, insurance and reinsurance, investment management, and insurance claims management. The company operates primarily through several subsidiaries, including Allied World, Odyssey Re, Northbridge Financial, Crum & Forster, Verassure Insurance, Onlia Agency Inc., and Zenith Insurance Company. The company was also the largest shareholder of Torstar with 40% of the Class B shares, as of May 2020. 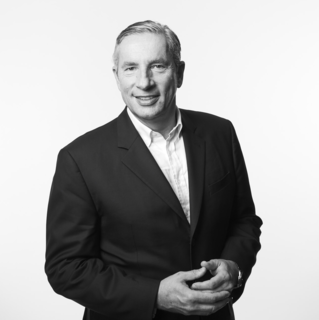 Dan Dodge is a cocreator of the QNX microkernel real-time operating system, with Gordon Bell. They began the project while students at the University of Waterloo in 1980. Dodge then moved to Kanata, Ontario, a high-tech area outside Ottawa, to start Quantum Software Systems. It was later renamed QNX Software Systems to avoid confusion with a hard drive manufacturer. The first commercial version of QNX was released for the Intel 8088 central processing unit (CPU) in 1982. 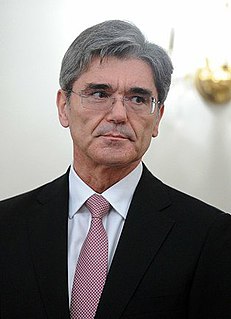 Randall Lynn Stephenson is a retired American telecommunications executive. He served as chairman and chief executive officer (CEO) of AT&T Inc. from May 9, 2007 – June 30, 2020 and as executive chairman of AT&T Inc. from July 1 until December 31, 2020. He served as National President of the Boy Scouts of America from 2016 to 2018. In April 2020, Stephenson announced he would step down as CEO of AT&T effective July 1, 2020, replaced by John Stankey. In November 2020, Stephenson announced he would step down as executive chairman of AT&T effective January 2021, replaced by William Kennard.

Keek was a free online social networking service that allowed its users to upload video status updates, which were called "keeks". Users could post keeks to the Keek website using a webcam or via the Keek mobile apps for iPhone, Windows Phone, BlackBerry, or Android. Users could also reply back with text or video comments, known as "keekbacks", and share content to other major social media networks. There was also an embed option so users could embed their keeks into a blog or website. 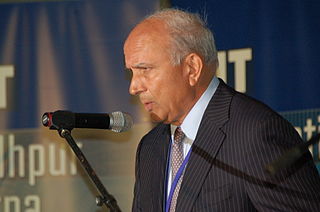 Prem Watsa is an Indian-Canadian billionaire businessman who is the founder, chairman, and chief executive of Fairfax Financial Holdings, based in Toronto. He has been called the "Canadian Warren Buffett." He was awarded the fourth highest civilian award of India, Padma Shri, in January 2020. 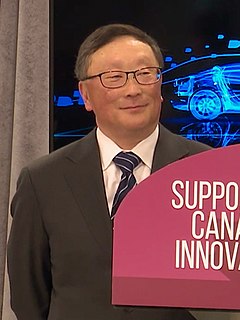 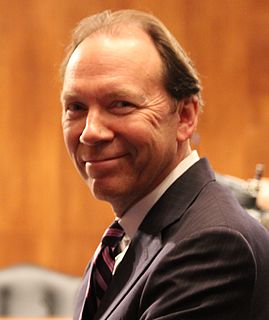 Daniel R. Hesse is the former chief executive officer of Sprint Corporation. Hesse's tenure at Sprint focused on improved customer service, and he served as the spokesperson in Sprint's "Simply Everything" commercials.

The BlackBerry PlayBook is a mini tablet computer developed by BlackBerry and made by Quanta Computer, an original design manufacturer (ODM). It was first released for sale on April 19, 2011, in Canada and the United States.

John Legere is an American businessman, former chief executive officer (CEO) and president of T-Mobile US. He previously worked for AT&T, Dell, Global Crossing, and is on the CTIA board of directors. He resigned as CEO following the approval of the merger of T-Mobile and Sprint. 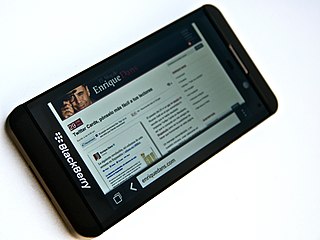 Halogen Software was a Canadian company that provided cloud-based talent management solutions to customers with between 100 and 10,000 employees. The firm was founded in 1996 and was headquartered in Ottawa, Ontario, Canada.

James (Jim) Skippen is a Canadian executive, lawyer, vice chairman of Quarterhill's board of directors, and former president and CEO of Canadian patent monetization firm, WiLAN. Skippen has over two decades of experience in intellectual property and patent licensing. Since 2006, Skippen's leadership at WiLAN has been credited in helping reshape the firm's focus from technology research and development to patent licensing monetization.