Schmugge made one appearance for Scottish club Hibernian, in a 2–0 win against Aberdeen on 21 September 1996. [3] Schmugge, who signed for Hibs on the same day as Ray Wilkins, represented the Germany national under-21 football team. [4]

Hibernian Football Club, commonly known as Hibs, is a professional football club based in the Leith area of Edinburgh, Scotland. The club plays in the Scottish Premiership, the top tier of the Scottish Professional Football League (SPFL), finishing 4th in the 2017–18 season.

Scott Booth is a Scottish football coach and former player, who is currently head coach of Glasgow City in the Scottish Women's Premier League. 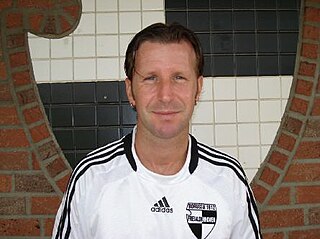 Dirk Johannes Lehmann is a retired German association football player. He is currently the manager of Sportfreunde Düren.

John Baxter was a Scottish footballer, who played as a wing half for Hibernian, Falkirk and Clydebank during the 1950s and 1960s. He was capped once by Scotland at under–23 level, and played for Hibs in the 1958 Scottish Cup Final, which Hibs lost 1–0 to Clyde. Clyde's winning goal was scored with a shot that deflected off Baxter.

James McColl was a Scottish footballer who played for Celtic, Hibernian and Stoke. McColl scored over 250 goals in the Scottish Football League, and was top scorer in the 1915–16 season with Celtic.

Patrick Callaghan was a Scottish football player, who played for Hibernian and represented Scotland once. Callaghan, who played mainly as an inside left, was a "superb servant" of Hibernian, playing for the club for his whole career from debut in 1899 until his retirement in 1914. Early in his time with the club, he won the 1902 Scottish Cup and the 1903 league championship; Callaghan made 21 appearances and scored nine goals in the latter triumph. Callaghan represented Scotland once, in a 1900 British Home Championship match against Ireland.

Duncan Urquhart was a Scottish footballer, who played for Hibernian, Aberdeen and Barrow. Urquhart represented Scotland once, in a 1934 British Home Championship match against Wales.

Graeme Shinnie is a Scottish professional footballer who plays for, and captains, Aberdeen, as a left back or central midfielder. He has previously played for Inverness Caledonian Thistle and during his time there had a loan spell at Forres Mechanics. Shinnie made his first full international appearance for Scotland in May 2018.

Derek Whiteford was a Scottish football player and manager. He played for Hibernian, Airdrie, Dumbarton and Falkirk.

Thomas Baxter "Tommy" Preston was a Scottish footballer, who played for Hibernian and St Mirren. Preston appeared for Hibernian in the 1958 Scottish Cup Final and made over 300 appearances for the club in all competitions. He also scored a goal in a famous victory for Hibs against FC Barcelona.

Season 1878–79 was the second in which Hibernian competed at a Scottish national level, entering the Scottish Cup for the second time.

The 2017–18 Aberdeen F.C. season was Aberdeen's 104th season in the top flight of Scottish football and the fifth in the Scottish Premiership. Aberdeen also competed in the League Cup and the Scottish Cup.