Thorsten Wittek (born 31 December 1976 in Berlin) is a German footballer who last played for CS Grevenmacher. [3]

Association football, more commonly known as football, is a team sport played with a spherical ball between two teams of eleven players. It is played by 250 million players in over 200 countries and dependencies, making it the world's most popular sport. The game is played on a rectangular field called a pitch with a goal at each end. The object of the game is to score by moving the ball beyond the goal line into the opposing goal.

He made his debut on the professional league level in the Bundesliga for Bayer 04 Leverkusen on 20 October 2001 when he came on as a substitute in the 87th minute in a game against VfB Stuttgart. 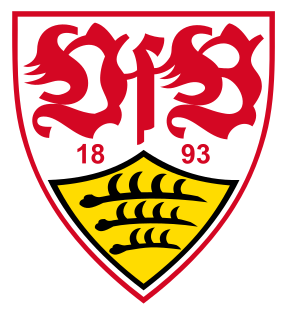 Verein für Bewegungsspiele Stuttgart 1893 e. V., commonly known as VfB Stuttgart, is a German sports club based in Stuttgart, Baden-Württemberg. The club is best known for its football team which is currently part of Germany's second division 2. Bundesliga. VfB Stuttgart has won the national championship five times, most recently in 2006–07; the DFB-Pokal three times; and the UEFA Intertoto Cup a record three times.

The 2001–02 Bundesliga the 39th season of the Bundesliga. Leverkusen lost despite leading the standings by 5 points with three games remaining, including a 1–0 loss to relegation-threatened 1. FC Nurnberg. 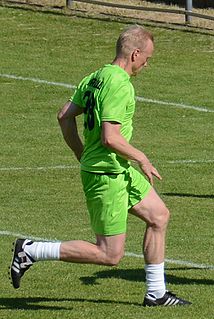 Carsten Ramelow is a retired German footballer who played as either a central defender or a defensive midfielder. 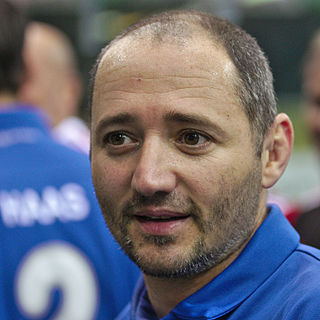 Oliver Patric Neuville is a German former footballer who played as a striker. 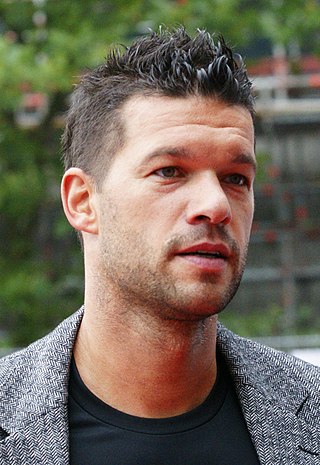 Michael Ballack is a German retired footballer. He is among the top goal scorers in the history of the German national team. Ballack wore the number 13 shirt for every team he has played for, save for 1. FC Kaiserslautern. He was selected by Pelé as one of FIFA's 100 Greatest Living Players, and as the UEFA Club Midfielder of the Year in 2002. He won the German Footballer of the Year award three times – in 2002, 2003 and 2005. Ballack was known for his passing range, powerful shot, physical strength and commanding presence in midfield.

The 2004–05 Bundesliga was the 42nd season of the Bundesliga, Germany's premier football league. 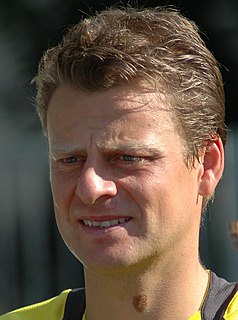 Christian Wörns is a retired German footballer who played as a defender. Wörns was widely considered one of the finest German defenders of his generation. He started his career with Waldhof Mannheim but played the majority of his career with Bayer Leverkusen and Borussia Dortmund. He also had a short stint with Paris Saint-Germain. 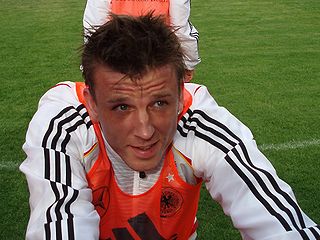 Bernd Schneider is a retired German footballer. He was mainly a midfielder but could play anywhere on the left and right flanks. After retiring in June 2009, he took up an advisory role at his first club, Carl Zeiss Jena, and a scouting position at Bayer Leverkusen. 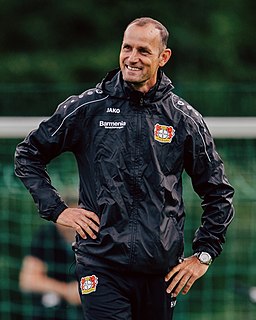 Klaus Toppmöller is a former football player and the coach of Georgia national football team from 2006 to 1 April 2008.

Thomas Kleine is a German football manager and former footballer. He is currently the manager of SpVgg Greuther Fürth II. 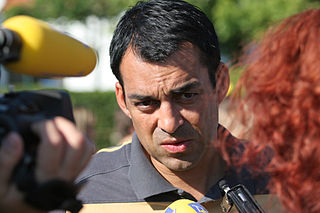 Robin Dutt is a retired German football player, who last coached VfL Bochum. He was also the manager of Bundesliga side Werder Bremen and Bayer Leverkusen. Previously he coached SC Freiburg after taking over from the long-serving Volker Finke in July 2007. He had previously been manager of Stuttgarter Kickers for four years. Starting from the 2011–12 season, he signed a two-year managerial contract with Bayer Leverkusen after the previous manager Jupp Heynckes confirmed on 21 March 2011 that he would not be extending his stay at the BayArena. 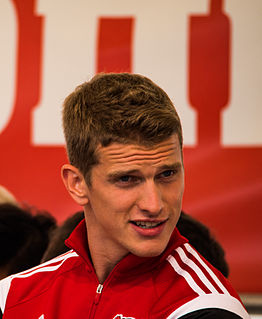 Lars Bender is a German footballer who plays as a midfielder for and captains Bayer Leverkusen and is a member of Germany national team. He was raised in Brannenburg, city in the district of Rosenheim. He is the twin brother of Sven Bender, who also plays for Bayer 04 Leverkusen.

Pascal Ojigwe is a Nigerian former professional footballer who played as a defender or defensive midfielder. He also holds German citizenship. 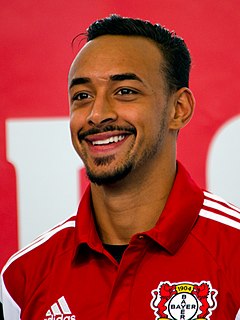 Karim Bellarabi is a German professional footballer who plays for Bayer Leverkusen as a winger.

The 2012–13 Bayer Leverkusen season is the 109th season in the club's football history. In 2012–13, the club played in the Bundesliga, the top tier of German football. It was the club's 34th season in this league, having been promoted from the 2. Bundesliga in 1979.

The 2013–14 DFB-Pokal was the 71st season of the annual German football cup competition. It began on 2 August 2013 with the first of six rounds and ended on 17 May 2014 with the final at the Olympiastadion in Berlin. Bayern Munich went on to win the competition, defeating Borussia Dortmund 2–0 in the final. 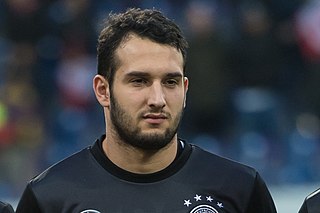 Levin Mete Öztunalı is a German professional footballer who plays as a midfielder for Mainz 05. 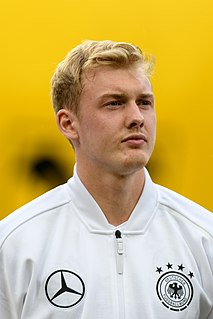 Julian Brandt is a German professional footballer who plays as a winger for Borussia Dortmund and the German national team.

Kai Havertz is a German professional footballer who plays as a midfielder for Bundesliga side Bayer Leverkusen and the German national team.