Those Lips, Those Eyes

Those Lips, Those Eyes is a 1980 American romance film directed by Michael Pressman and starring Frank Langella, Glynnis O'Connor, and Tom Hulce.

In the early 1950s, a star-struck Ohio boy, Artie Shoemaker, skips school to work behind the scenes for a touring stock theatrical company.

Inept at his job, Artie is nearly fired until the star of the show, Harry Crystal, takes a liking to him and takes the kid under his wing. Artie becomes smitten with one of the attractive chorus girls from the show, Ramona, a worldly young woman who provides his sexual initiation. But soon the show must move on to another town, leaving Artie alone with his dreams. 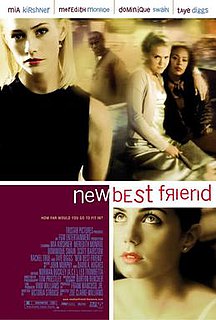 New Best Friend is a 2002 American psychological thriller film based on a story by author James Edwards. The film was originally owned by MGM, which eventually let this film go. Since then, TriStar Pictures acquired the rights to distribute this film in the United States and some other territories, primarily for home video market; still, TriStar Pictures gave this film a limited theatrical release in the United States on April 12, 2002.

Cutthroat Island is a 1995 adventure swashbuckler film directed by Renny Harlin and written by Robert King and Marc Norman based on a story by Michael Frost Beckner, James Gorman, Bruce A. Evans, and Raymond Gideon. It stars Geena Davis, Matthew Modine, and Frank Langella. The film is an international co-production among companies in the United States, France, Germany, and Italy. 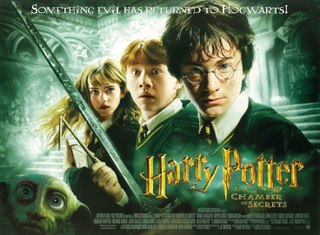 Harry Potter and the Chamber of Secrets is a 2002 fantasy film directed by Chris Columbus and distributed by Warner Bros. Pictures. It is based on J. K. Rowling's 1998 novel of the same name. The film is a sequel to the 2001 film Harry Potter and the Philosopher's Stone and the second instalment in the Harry Potter film series. It was written by Steve Kloves and produced by David Heyman.

Sweet November is a 2001 American romantic drama film based in San Francisco directed by Pat O'Connor and starring Keanu Reeves and Charlize Theron. The film is based on the 1968 film Sweet November written by Herman Raucher, which starred Anthony Newley and Sandy Dennis.

Amadeus is a 1984 American period biographical drama film directed by Miloš Forman and adapted by Peter Shaffer from his stage play Amadeus. The story is set in Vienna, Austria during the latter half of the 18th century, and is a fictionalized biography of Wolfgang Amadeus Mozart, described by its writer as "fantasia on the theme of Mozart and Salieri". Mozart's music is heard extensively in the soundtrack of the film. The film follows a fictional rivalry between Mozart and Italian composer Antonio Salieri at the court of Emperor Joseph II. The film stars F. Murray Abraham as Salieri and Tom Hulce as Mozart.

Junior is a 1994 American buddy comedy directed and produced by Ivan Reitman, and starring Arnold Schwarzenegger, Danny DeVito and Emma Thompson. The film follows Alex Hesse, an Austrian-American scientist who agrees to undergo a male pregnancy from a newly developed drug Expectane. 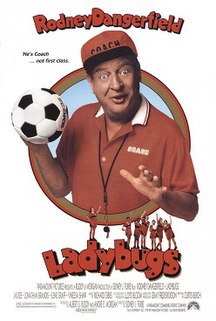 Ladybugs is a 1992 American sports-comedy film starring Rodney Dangerfield and directed by Sidney J. Furie. Dangerfield plays a Denver businessman who takes over a girls soccer team that the company he works for sponsors. The film also stars Jackée Harry as his assistant coach, Ilene Graff as his girlfriend, Jonathan Brandis as his girlfriend's son, and Vinessa Shaw as his boss' daughter. 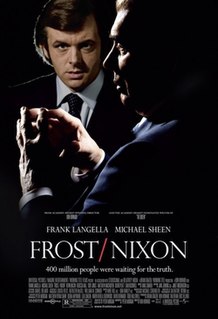 Frost/Nixon is a 2008 historical drama film based on the 2006 play of the same name by Peter Morgan, who also adapted the screenplay. The film tells the story behind the Frost/Nixon interviews of 1977. The film was directed by Ron Howard. A co-production of the United States, the United Kingdom and France, the film was produced for Universal Pictures by Howard, Brian Grazer of Imagine Entertainment, and Tim Bevan and Eric Fellner of Working Title Films, and received five Oscar nominations, including Best Picture, Best Actor, and Best Director. 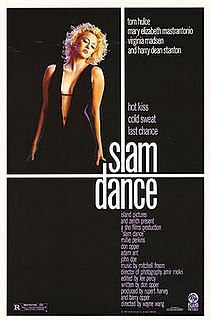 Slam Dance is a 1987 neo-noir thriller directed by Wayne Wang and starring Tom Hulce, Mary Elizabeth Mastrantonio, Virginia Madsen and Harry Dean Stanton. It was screened out of competition at the 1987 Cannes Film Festival.

Love at Large is a 1990 American romance and mystery film directed by Alan Rudolph and starring Tom Berenger, Elizabeth Perkins and Anne Archer. 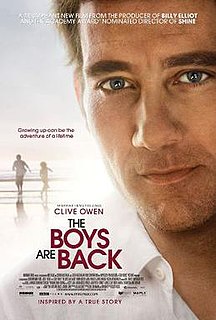 The Boys Are Back is a 2009 Australian/British drama film directed by Scott Hicks, produced by Greg Brenman and starring Clive Owen. Based on the book The Boys Are Back In Town by Simon Carr, the film features a score composed by Hal Lindes and a soundtrack by Sigur Rós. 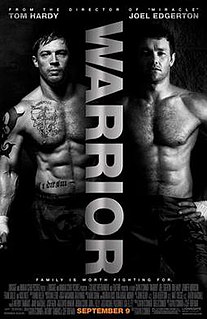 Warrior is a 2011 American sports drama film directed by Gavin O'Connor and written by O'Connor, Cliff Dorfman, and Anthony Tambakis. It stars Tom Hardy and Joel Edgerton as two estranged brothers whose entrance into a mixed martial arts tournament makes them come to terms with their lives and each other. Nick Nolte was nominated for an Oscar for Best Supporting Actor for his role as the father of the two brothers. Jennifer Morrison and Frank Grillo also star.

David Shaber was an American screenwriter and theatre producer, who wrote the screenplays for The Warriors, Nighthawks, Rollover, Last Embrace and Flight of the Intruder. He also wrote the final draft, though uncredited, for the John McTiernan film The Hunt for Red October. 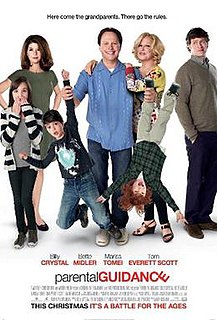 Parental Guidance is a 2012 American family comedy film starring Billy Crystal, Bette Midler, Marisa Tomei, and Tom Everett Scott and directed by Andy Fickman. It was released on December 25, 2012. It was the final 20th Century Fox film to be financed by Dune Entertainment as part of a deal with the studio; shortly after, the company merged with RatPac Entertainment and struck a financing deal with Warner Bros.