Those People was released theatrically in New York City and Los Angeles in May 2016. The film was nominated for Outstanding Film – Limited Release at the 28th GLAAD Media Awards in 2017. [2]

Kuhn has described the film as having been inspired by his own experience falling in love with his best friend at college, as well as by his fascination with the story of Bernie Madoff's son Mark, who committed suicide two years after his father's arrest. [3]

Charlie (Jonathan Gordon), a young art student from New York haunted by Joris-Karl Huysmans' A Rebours, is asked by his best friend Sebastian (Jason Ralph) to move into his apartment as he deals with depression and public scorn following his wealthy financier father Dick's (Daniel Gerroll) arrest on high-profile white-collar criminal charges. Charlie's mother thinks this is a bad idea due to long-standing one-sided romantic feelings he has for Sebastian. On a night out with Sebastian and a wider group of friends Charlie meets and flirts with Lebanon-born bar-pianist Tim (Haaz Sleiman). The two have chemistry, but when Sebastian is refused service at the bar because of his father, the group abruptly leaves. On their way back to Sebastian's apartment they are chased by paparazzi. The events of the night worsen Sebastian's depression.

Charlie and a couple of his friends attend a classical music concert and notice Tim is the pianist. After the show, Charlie and Tim spend the night together talking and share a kiss, beginning a relationship which leads Charlie to begin neglecting Sebastian. Tim soon professes love for Charlie, but sensing Charlie is holding back on account of his feelings for Sebastian, Tim breaks up with him. At a Halloween party Charlie is depressed at his break-up but makes a pass at Sebastian, who laughs it off. Later that night Sebastian has brought a guy home with them, which upsets Charlie who professes his feelings. They begin a threesome encounter at the date's suggestion, but Sebastian storms out and Charlie tells the guy to leave. Sebastian rejects Charlie, saying it would ruin their friendship. Charlie moves out and reunites with Tim.

Tim is offered a dream job as pianist for the San Francisco Symphony, which would require a move he asks Charlie to also make. Sebastian visits his father in jail, and he tells him to continue his crimes which causes Sebastian to disown his father after an argument. His father hangs himself in his cell. Charlie struggles to break the news of his leaving New York to Sebastian at a tense dinner with their friends and Tim. The news causes Sebastian to stand on his apartment balcony prepared to jump. Charlie talks him down but Tim breaks up with him again, believing he'll always come second. Sebastian moves in with Charlie and his mother and begins to slowly recover. On the eve of Tim's departure for San Francisco Sebastian calls him and he and Charlie spend one more night and part on sad but good terms, admitting it's not their time despite their feelings for each other. Some time later Charlie has completed his Master's thesis art exhibition using himself for inspiration, rather than Sebastian, for the first time. Meanwhile Sebastian is preparing to leave New York for a fresh start, and the film ends with one more friends gathering as Sebastian and Charlie toast to their friendship with the rest of the group.

The Birdcage is a 1996 American comedy film directed by Mike Nichols, adapted by Elaine May, and starring Robin Williams, Gene Hackman, Nathan Lane, and Dianne Wiest. Dan Futterman, Calista Flockhart, Hank Azaria, and Christine Baranski appear in supporting roles. It is an English-language remake of the 1978 Franco-Italian film La Cage aux Folles and the musical of the same name. 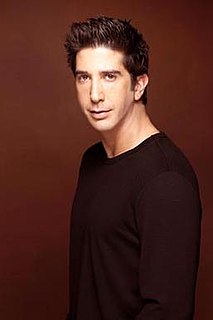 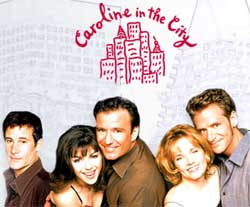 Caroline in the City is an American television sitcom that ran on the NBC television network from 1995 until 1999. It stars Lea Thompson as cartoonist Caroline Duffy, who lives in Manhattan. The series premiered on September 21, 1995, in the "Must See TV" Thursday night block between Seinfeld and ER. The show ran for 97 episodes over four seasons before it was cancelled; the final episode, which ended on a cliffhanger that was never resolved, was broadcast on April 26, 1999. The series' rights are currently held by CBS Television Distribution.

The Mudge Boy is a 2003 American drama film directed by Michael Burke, based on Burke's 1998 short film Fishbelly White which was featured in the compilation Boys Life 5. It stars Emile Hirsch, Tom Guiry, and Richard Jenkins. It was produced by Elizabeth W. Alexander and distributed by Showtime after its release at the 2003 Sundance Film Festival. 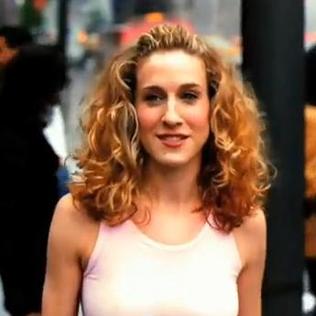 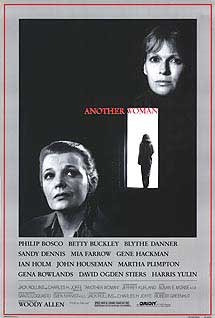 Another Woman is a 1988 American drama film written and directed by Woody Allen. It stars Gena Rowlands as a philosophy professor who accidentally overhears the private analysis of a stranger, and finds the woman's regrets and despair awaken something personal in her.

Lilies is a 1996 Canadian film directed by John Greyson. It is an adaptation by Michel Marc Bouchard and Linda Gaboriau of Bouchard's own play Lilies. It depicts a play being performed in a prison by the inmates.

Urbania is a 2000 independent drama film based on the play Urban Folk Tales. It was nominated for the Grand Jury Prize at the 2000 Sundance Film Festival, then played the Toronto International Film Festival, the Seattle Film Festival, and a number of LGBT film festivals, winning a total of 6 "Best Film" awards. It was released by Lionsgate and was named "One of the Year's Best Films" in over 35 publications including the Los Angeles Times, Time Out, the Chicago Tribune, and the San Francisco Chronicle. 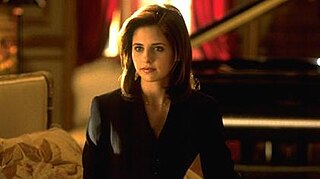 Kathryn Merteuil is a fictional character who appears in Cruel Intentions and Cruel Intentions 2, portrayed by actresses Sarah Michelle Gellar and Amy Adams, respectively. Based on the Marquise Isabelle de Merteuil in Pierre Choderlos de Laclos's 1782 novel Les Liaisons dangereuses, Kathryn serves as the primary antagonist of the series. 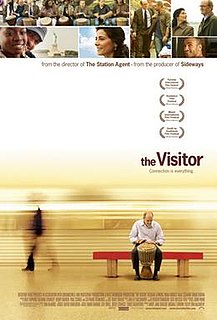 The Visitor is a 2007 American drama film written and directed by Tom McCarthy and produced by Michael London and Mary Jane Skalski. Executive producers were Jeff Skoll and Omar Amanat. The screenplay focuses on a lonely man in late middle age whose life changes when a chance encounter with an immigrant couple forces him to face issues relating to identity, immigration, and cross-cultural communication in post-9/11 New York City.

JenniferDamiano is an American actress and singer. She made her Broadway debut in 2006 as an ensemble member in the original production of Spring Awakening, and went on to originate the role of Natalie Goodman in the musical Next to Normal, for which she was nominated for the 2009 Tony Award for Best Actress in a Featured Role in a Musical, becoming one of the youngest nominees for the award at age 17. Her other Broadway roles include Mary Jane Watson in Spider-Man: Turn Off the Dark in 2011 and Jean in the 2016 musical American Psycho, in addition to a number of roles off-Broadway. 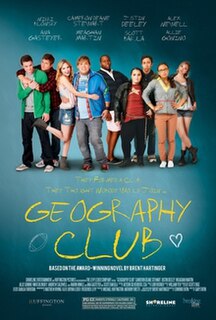 Burning Bodhi is a 2015 independent film written and directed by Matthew McDuffie. It stars Kaley Cuoco, Landon Liboiron, Sasha Pieterse, and Cody Horn. The film had its world premiere at the Austin Film Festival on November 1, 2015.

Naomi and Ely's No Kiss List is a 2015 American romantic comedy-drama film written by Amy Andelson and Emily Meyer, and directed by Kristin Hanggi. It is based on the 2007 book of the same name by Rachel Cohn and David Levithan. The film stars Victoria Justice, Pierson Fodé, and Matthew Daddario. It had its world premiere at the Outfest Film Festival on July 17, 2015. It was then released on September 18, 2015, through video on demand. The film produced over $1 million in the box-office and was made on a budget of $3 million. In a 2016 interview, Victoria Justice stated that "...the film is a drama, to say the least. There is no true plot to the film and I feel like after the movie ended, Ely and Naomi got an apartment together and finally lived their true happy endings." 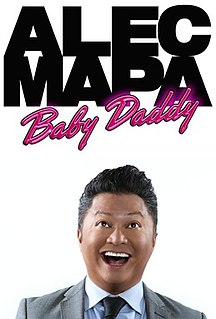 Alec Mapa: Baby Daddy is a 2013 one-man show by Alec Mapa. It was made into a concert film that screened at film festivals in 2014 and premiered on Showtime in 2015. 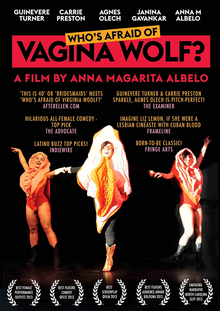 Who's Afraid of Vagina Wolf? is a 2013 lesbian romantic comedy film, created by Anna Margarita Albelo, in her feature directorial debut.

I Miss You is a 2019 Bolivian drama film directed by Rodrigo Bellott. It was selected as the Bolivian entry for the Best International Feature Film at the 92nd Academy Awards, but it was not nominated. 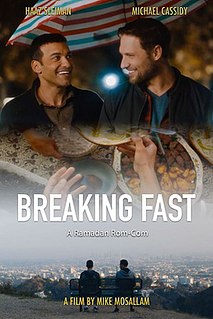 Breaking Fast is a 2020 American romantic comedy film, directed by Mike Mosallam and released in 2020. An expansion of Mosallam's 2015 short film of the same title, the film stars Haaz Sleiman as Mo, a gay Muslim doctor in Los Angeles who is emotionally closed off following a painful breakup with his former partner Hassan ; on the first day of Ramadan he meets Kal, getting to know him over nightly iftars.