Thoth (stylised as THOTH) is an abstract shoot 'em up video game created by Jeppe Carlsen, former lead gameplay designer of Playdead games Limbo and Inside . [1] [2] It is published by Double Fine Productions. [3]

As a solo developer, Carlsen had previously worked on independent platformer 140. [3] Carlsen had thought about designing a game inspired by Geometry Wars: Retro Evolved and Robotron: 2084 before he started working on Limbo. [4]

Music for the game was composed by experimental composers SØS Gunver Ryberg and Cristian Vogel. [3]

Progress through the levels of the game is made by eliminating all enemies. Doing so transforms them into ghostly voids that relentlessly chase the player. The game can be played solo or with two players cooperatively; when playing with a second player, the first player to die will become a ghost void that haunts the player. The main sequence of levels are divided into sets of four, each introducing new enemy types and game mechanics. If the main 64 levels are completed, the player gains access to randomly generated levels. [4] 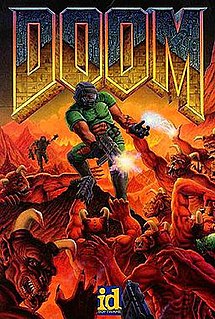 Doom is a 1993 first-person shooter (FPS) game developed by id Software for MS-DOS. Players assume the role of a space marine, popularly known as Doomguy, fighting his way through hordes of invading demons from Hell. The first episode, comprising nine levels, was distributed freely as shareware and played by an estimated 15–20 million people within two years; the full game, with two further episodes, was sold via mail order. An updated version with an additional episode and more difficult levels, Ultimate Doom, was released in 1995 and sold at retail.

Shoot 'em up is a subgenre of video games within the shooter subgenre in the action genre. There is no consensus as to which design elements compose a shoot 'em up. Some restrict the definition to games featuring spacecraft and certain types of character movement; others allow a broader definition including characters on foot and a variety of perspectives. 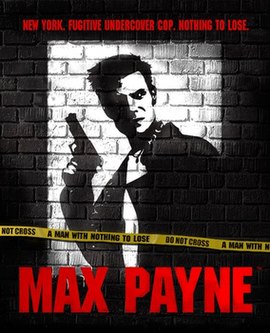 Robotron: 2084 is an arcade video game developed by Eugene Jarvis and Larry DeMar of Vid Kidz and released by Williams Electronics in 1982. It is a shoot 'em up with two-dimensional graphics. The game is set in the year 2084 in a fictional world where robots have turned against humans in a cybernetic revolt. The aim is to defeat endless waves of robots, rescue surviving humans, and earn as many points as possible. 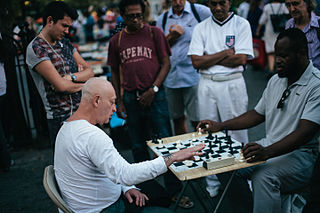 Fast chess is a type of chess in which each player is given less time to consider their moves than normal tournament time controls allow. Fast chess is further subdivided, by decreasing time controls, into rapid chess, blitz chess, and bullet chess. Armageddon chess is a particular variation in which different rules apply for each of the two players. 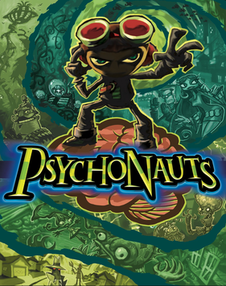 Psychonauts is a platforming game developed by Double Fine Productions that first released in 2005. The game was initially published by Majesco Entertainment for Microsoft Windows, Xbox and PlayStation 2; Budcat Creations helped with the PlayStation 2 port. In 2011, Double Fine acquired the rights for the title, allowing the company to republish the title with updates for modern gaming systems and ports for OS X and Linux. 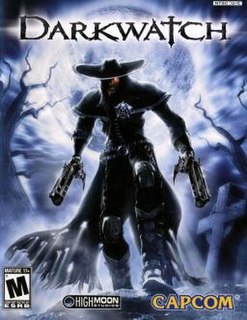 Darkwatch: Curse of the West is a 2005 first-person shooter video game for the PlayStation 2 and Xbox. It was developed by High Moon Studios and published by Capcom in the United States and by Ubisoft in Europe and Australia.

Bit.Trip, stylized BIT.TRIP, is a series of eight video games developed by Choice Provisions and published by Aksys Games for the Wii, Nintendo 3DS, Microsoft Windows, macOS, PS Vita, and PS4. It was published by Arc System Works for WiiWare and Nintendo eShop in Japan, and by Namco Networks America Inc for the iPhone, iPod Touch and iPad. Each game revolves around the adventures of a character named "Commander Video", and features "a crazy mix of 80s aesthetics and modern game design". The styles of the games range from pong-like, to platforming, and shooting. Each game in the series features a chiptune-inspired soundtrack, but a different style of rhythm-based gameplay in each. Most games in the series have few levels; Beat, Core, Void and Flux have only three levels each while Fate has six and Runner has 36. Most of the games feature levels lasting between 10 and 25 minutes to make up for having such few levels. The games also consists of 8 modes, Nether, Hyper, Mega, Super, Ultra, Extra, Giga, and Meta, which changes based on how well the player does. Each successive game adds a new mode, the highest being Mega in Beat, and Meta in Flux.

League of Legends (LoL) is a multiplayer online battle arena video game developed and published by Riot Games for Microsoft Windows and macOS. Inspired by Defense of the Ancients, the game follows a freemium model. The game was released on October 27, 2009. An abridged version of the game called League of Legends: Wild Rift for mobile and console, was announced on October 15, 2019. 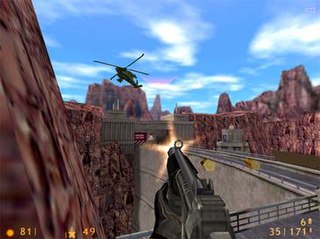 First-person shooter (FPS) is a video game genre centered on gun and other weapon-based combat in a first-person perspective; that is, the player experiences the action through the eyes of the protagonist. The genre shares common traits with other shooter games, which in turn makes it fall under the heading action game. Since the genre's inception, advanced 3D and pseudo-3D graphics have challenged hardware development, and multiplayer gaming has been integral. 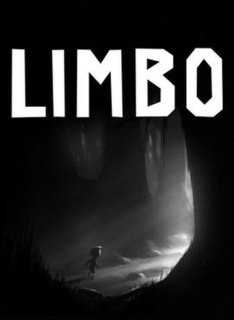 Limbo is a puzzle-platform video game developed by independent studio Playdead. The game was released in July 2010 on Xbox Live Arcade, and has since been ported to several other systems, including the PlayStation 3, Linux and Microsoft Windows. Limbo is a 2D side-scroller, incorporating a physics system that governs environmental objects and the player character. The player guides an unnamed boy through dangerous environments and traps as he searches for his sister. The developer built the game's puzzles expecting the player to fail before finding the correct solution. Playdead called the style of play "trial and death", and used gruesome imagery for the boy's deaths to steer the player from unworkable solutions. 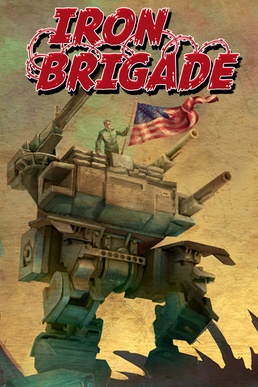 Iron Brigade, formerly titled Trenched, is a 2011 video game, developed by Double Fine Productions, published by Microsoft Studios as a downloadable Xbox Live Arcade title on the Xbox 360, and set for release as a Microsoft Windows title in 2012. Announced at the 2011 Game Developers Conference by Tim Schafer, Iron Brigade is a hybrid tower defense and third-person shooter game, set after World War I in an alternate reality, where the player controls units from the Mobile Trench Brigade to fight off robotic species called the Monovision. The player controls giant mecha-style robots with weapon and armor customization through a variety of missions set across the world. The game was released on the Xbox Live service on June 22, 2011, with a delayed release in certain European areas due to trademark issues with the title, with its release scheduled for November 30, 2011 but was ultimately released on December 1, 2011 under the alternate name Iron Brigade. The name of the title was updated worldwide to Iron Brigade alongside the European release.

Star Cruiser is a role-playing first-person shooter video game developed by Arsys Software and released in Japan for the PC-8801 and X1 home computers in 1988. The game was released for the PC-9801 and X68000 computers in 1989, and then ported by Masaya (NCS) to the Mega Drive in 1990. 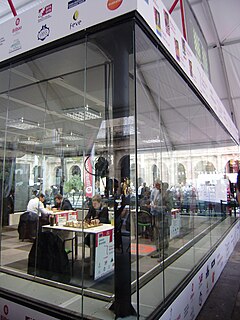 The Bilbao Chess Masters Final is an annual chess tournament which between 2008-12 brought together the strongest players from the previous year's "Grand Slam" events. Series organisers Grand Slam Chess Association (GSCA) became defunct in 2012 due to the demise of the Grand Slam hosts and scheduling problems but the Bilbao Masters continued as an annual invitational event until 2016. 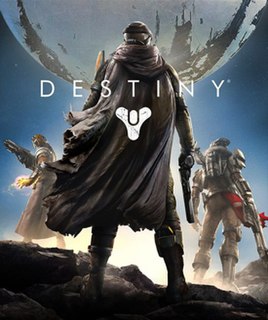 Destiny is an online-only multiplayer first-person shooter video game developed by Bungie and previously published by Activision. Destiny is now self-published by Bungie after separating from Activision in 2019. It was released worldwide on September 9, 2014, for the PlayStation 3, PlayStation 4, Xbox 360, and Xbox One consoles. Destiny marked Bungie's first new console franchise since the Halo series, and it was the first game in a ten-year agreement between Bungie and Activision. Set in a "mythic science fiction" world, the game features a multiplayer "shared-world" environment with elements of role-playing games. Activities in Destiny are divided among player versus environment (PvE) and player versus player (PvP) game types. In addition to normal story missions, PvE features three-player "strikes" and six-player raids. A free roam patrol mode is also available for each planet and features public events. PvP features objective-based modes, as well as traditional deathmatch game modes. 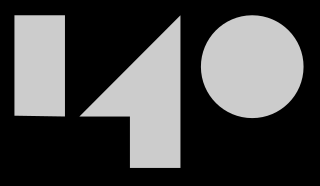 140 is a platform game independently developed by Jeppe Carlsen, known for his gameplay direction for Playdead's Limbo. The game is described as a "minimalistic platformer", using electronic music to create synesthesia as the player makes its way through four different levels, each with its own sound-track. The game-play has been compared to other similar games which involve music synchronization like Sound Shapes and the Bit.Trip series, though with difficult platforming elements comparable to games in the Mega Man series. The game was released on Microsoft Windows, OS X, and Linux systems in October 2013, on Xbox One in August 2016, on PlayStation 4, Wii U in September 2016, and Nintendo Switch in January 2020. A release on PlayStation Vita and Nintendo 3DS was planned, but later cancelled.

Heroes of the Storm is a crossover multiplayer online battle arena video game developed and published by Blizzard Entertainment and released on June 2, 2015, for Microsoft Windows and macOS. The game features various characters from Blizzard's franchises as playable heroes, as well as different battlegrounds based on Warcraft, Diablo, StarCraft, and Overwatch universes. The game is free-to-play, based on freemium business model, and is supported by microtransactions which can be used to purchase heroes, visual alterations for the heroes in the game, mounts, and other cosmetic elements. Blizzard does not call the game a "multiplayer online battle arena" or an "action real-time strategy" because they feel it is something different with a broader playstyle; they refer to it as an online "hero brawler".

Inside is a puzzle-platformer adventure game developed and published by Playdead in 2016 for PlayStation 4, Xbox One and Microsoft Windows. The game was released for iOS in December 2017 and Nintendo Switch in June 2018. The player controls a boy in a dystopic world, solving environmental puzzles and avoiding death. It is the spiritual successor to Playdead's 2010 game Limbo, and features similar 2.5D gameplay.