Thoudang (English: Duty) is a 2010 Manipuri film directed by Romi Meitei and written and produced by Madhumita Chakraborty. It stars Bobo and Abenao Elangbam in the lead roles. The film was released at Mini Shankar, Lamphel, on 22 January 2010. [1] Thoudang was screened at The Second International Women’s Film Festival held in Shillong on 26 April 2012. [2]

Abenao Elangbam is an Indian actress who predominantly appears in Manipuri films. She is a resident of Singjamei, Imphal. She completed her Master in Adult Education from Manipur University.

Shillong is a hill station in the northeastern part of India and the capital of Meghalaya, which means "The Abode of Clouds" and is one of the smallest states in India. It is the headquarters of the East Khasi Hills district and is situated at an average altitude of 4,908 feet above sea level, with the highest point being Shillong Peak at 6,449 feet. Shillong is the 330th most populous city in India with a population of 143,229 according to the 2011 census. It is said that the rolling hills around the town reminded the European settlers of Scotland. Hence, they would also refer to it as the "Scotland of the East".

Sharon Lowen is an Odissi dancer, trained since 1975 by Guru Kelucharan Mohapatra. She has performed and choreographed for film and television and presented hundreds of concerts throughout India, North America, Asia, Africa, the United Kingdom. and the Middle East. Sharon came to India in 1973 after earning degrees in Humanities, Fine Arts, Asian Studies and Dance from the University of Michigan as a Fulbright Scholar to study Manipuri and later Chhau and Odissi.

Manipuri dance, also known as Jagoi, is one of the major Indian classical dance forms, named after the region of its origin – Manipur, a state in northeastern India bordering with Myanmar (Burma), Assam, Nagaland and Mizoram. It is particularly known for its Hindu Vaishnavism themes, and exquisite performances of love-inspired dance drama of Radha-Krishna called Raslila. However, the dance is also performed to themes related to Shaivism, Shaktism and regional deities such as Umang Lai during Lai Haraoba. 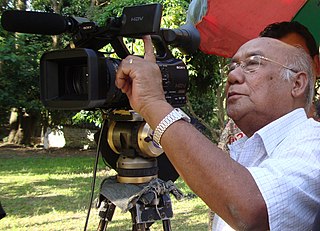 Aribam Syam Sharma is a film director and composer from Manipur in India. He debuted in the Manipur film scene as an actor in the movie Matamgi Manipur. In 1974, he directed his first movie Lamja Parshuram. Lamja Parshuram became the first Manipur film to run for 100 days in the box office. His 1980 film Olangthagee Wangmadasoo was the first ever and the only Manipur film to run for more 25 weeks. The film ran for 32 weeks at the box office.

The 20th National Film Awards, presented by Ministry of Information and Broadcasting, India to felicitate the best of Indian Cinema released in the year 1972. 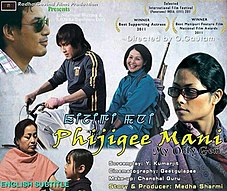 Phijigee Mani is a 2011 Manipuri film directed by Oinam Gautam Singh, co-written and produced by Takhelchangbam Ongbi Medha Sharmi, and starring an ensemble cast including Gurumayum Bonny Sharma, Abenao Elangbam and Leishangthem Tonthoingambi Devi in the lead roles. The film garnered positive response from the critics. It was selected the Best Regional Film Award in Manipuri language and Best Supporting Actress at the 59th National Film awards for the year 2011. Phijigee Mani was also selected for Indian Panorama 2011.

Chiru (Rem) is a Kuki-Chin language of India. The Chiru population numbers approximately 8,599.It is one of the least documented and a highly endangered language spoken in three districts of Manipur: Noney, Kangpokpi and Churachandpur, and Cachar district of Assam. Chiru has been recognized as a Scheduled Tribe of Manipur by the government of India since 1956 under “The Scheduled Castes and Scheduled Tribes Orders (Amendment) Act, Act No. 63 of 1956” Dated 25th September, 1956. The total population of the native speakers of Chiru is only 8599. The native speakers have high proficiency in Meitei. The language is neither used in schools nor in radio or mass media. Older people read and write in Manipuri written in Bengali script, but the younger generation prefers Roman script.

Toro is a 2015 Manipur film written and directed by Kirmil Soraisam, produced by Jinatombi Soraisam and presented by Sanamatum. The film features Soma Laishram as the titular protagonist, with Redy Yumnam, and Bala Hijam in the lead roles. Many actors like R.K. Hemabati, Ghanashyam, Dhanamanjuri, Surjit, Pakhangba, Mangal, Pamba Elangbam, Sorri Senjam, etc. and many more are playing supporting roles.

Tabunungda Akaiba Likli is a 2013 Manipuri film directed by Romi Meitei and produced by Barun. It stars Gokul Athokpam, Abenao Elangbam, Hamom Sadananda and Artina in the lead, with Deky, Dhanapriya, Priyogopal, and Modhubala portraying supporting roles. It is a love triangle film. The film was premiered at Manipur Film Development Corporation (MFDC) on 21 September 2013. It was also premiered at Dussehra Ground Mukherjee Nagar, New Delhi on 28 September 2013.

The cinema of Manipur refers to the film industry of the Manipur.

Nobap is a 2009 Manipuri film directed by Heisnam Tomba, written and produced by Suresh Hidang, and presented by Madhuri. It stars Raju Nong, Gokul Athokpam, Abenao Elangbam and Ranjana with master Denil, master Chingkheinganba, master Santosh, master Oliver Chiru, master Russel, master Robinson, master Biken and master Chingkhei in the lead, with Sorojini, Shanti and Dhonen portraying supporting roles. There is also special appearance of international footballer Renedy Singh in the film. O. Boby is the sound designer of the film. Bishe Moirangthem, Tomba Thangjam and Mangangsana composed the soundtrack and Suresh Hidang wrote the lyrics. The film was released in the year 2009.

Ureinung is a 2013 Manipur film directed by Pilu Heigrujam and produced by Bandana Maisnam and Ilu, under the banner of Bandana films. It stars Sonia Samjetsabam as the titular protagonist with Rahul in the lead, with Indu, Denny Likmabam, Chitra Pangabam, Mangoljao, Dev, Bebeto, Bidyalaxmi, Mango and Raj Elangbam playing supporting roles. It narrates the story of a girl Ureinung. It was played by Sonia Samjetsabam. 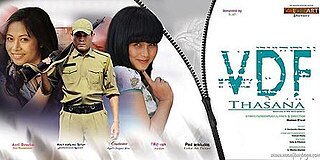 VDF Thasana is a 2014 Manipur film directed by Homen D' Wai and produced by L. Momo Sharma, under the banner of Robin Color Picture. It stars Gurumayum Bonny as the titular protagonist with Leishangthem Tonthoi and Abenao Elangbam in the lead, with Kaboklei Inaocha, Sanajaoba, Indu, Puneshori and Shyamdhani playing supporting roles. The story and screenplay of the film was written by Homen D' Wai. G. Surchandra composed the soundtrack for the film.

Nongmatang is a 2014 Manipur film directed by Suvas E. and produced by Ajit Yumnam and Brojen Yumnam, under the banner of Cultural Society Khuman Maheikol and presented by Skyline Pictures. It stars Kaiku Rajkumar, Abenao Elangbam and Prity Maibam in the lead, with Binitia, Ashokumar, Geetchandra, Puinabati, Priya, Nando Sharma, Brojendrakumar, Somorendro and many others playing supporting roles. The story of the film was written by Ajit Yumnam. Nongmatang got selection at the 3rd Delhi International Film Festival 2014.

Eidee Kadaida is a 2014 Manipur film directed by O. Gautam and produced by Bigyani Hidangmayum, under the banner of Nilahari Films. The film features Gokul Athokpam, Abenao Elangbam and Leishangthem Tonthoi in the lead roles. Other actors include Indu, Idhou, Venus, Pakhangba and Thasana, all of whom are portraying supporting roles. The film was premiered at Manipur Film Development Corporation (MFDC), Palace Compound on 31 January 2014 and Bheigyachandra Open Air Theatre (BOAT), Imphal on 19 April 2014.

Gurumayum Bonny is an Indian actor and singer who predominantly appears in Meitei films. He is a resident of Keishamthong Maning Longjam Leikai, Imphal, Manipur. He has also worked in Shumang Leelas including Kunti series, Nongallamdaisida, Opium War, Pizza,etc.

Elangbam Panthoi Chanu is an Indian footballer who plays as a goalkeeper for the India women's national football team. She also played for Eastern Sporting Union in Indian Women's League.