Ba'al is still missing, but the Jaffa have finally won their freedom from the Goa'uld. Teal'c and Bra'tac are awarded the title Bloodkin by the new Free Jaffa Nation, following the defeat of the Replicators and the Goa'uld. Jack O'Neill refuses to accept that Daniel Jackson is dead, believing that Daniel has managed to Ascend.

Daniel finds himself in a strange ethereal diner full of people, Daniel recognizes Oma Desala. He learns that this place is a projection of a meeting place for Ascended beings. The diner is full of other Ascended Ancients, who refuse to speak with Daniel because of the rules of the Ascended. One other man, Jim, seems to be arguing with Oma, and shows Daniel a newspaper detailing Anubis' plan to retake Dakara and use the Dakara Superweapon to kill all life in the galaxy. Luring most of the Jaffa away, Anubis regains the weapon when he recaptures Dakara.

Back in the Ascended Diner, Oma explains she has been punished for helping people, like Daniel, Ascend. Daniel then realizes that Anubis is half-Ascended, and Oma helped him Ascend. The other Ancients refused to completely de-ascend Anubis as part of Oma's punishment for breaking the rules, despite the fact that he is still a threat to the galaxy. Daniel then realizes Jim is Anubis - Anubis' chosen manifested form in his half-protrusion into the Ascended realm.

Back on Earth, the gate dials when Anubis activates the weapon on every gate in the galaxy. However, back in the Ascended realm, Daniel has persuaded Oma to take responsibility for Anubis. She stands up to fight Anubis, and all of the other ancients turn in surprise. Anubis laughs, saying that she cannot possibly defeat him, as he is kept alive as punishment, and Oma takes Anubis into the Ascended realm to fight him there and prevent him from acting in the galaxy. Daniel is returned to the SGC from the Ascended Realm. SG-1 celebrates with a fishing trip to Jack's cottage.

The episode originally aired as a 63-minute piece, but an edited 45-minute version exists for syndication. When the season was initially released on DVD, the release contained the shortened 45-minute version. Due to complaints, MGM offered a rebate, whereby people could send in a proof of purchase from the DVD with the shortened episode to receive a DVD with the original episode. When the season was re-released in the slimline cases, it contained the full 63-minute episode as did the standard Region 2 version of the Season 8 boxset. Neither version has a commentary featured on any of the Season 8 Box sets. The 45-minute version omits the following:

Also, some may notice that the diner is Der Waffelhouse set from the Showtime (TV channel), Bryan Fuller series Dead Like Me . The diner is the set of the main meeting place in most, if not all episodes of Dead Like Me . 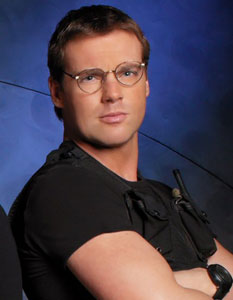 Daniel Jackson, Ph.D., is a fictional character in the military science fiction franchise Stargate, and one of the main characters of the series Stargate SG-1. He is portrayed by James Spader in the 1994 film Stargate, and by Michael Shanks in Stargate SG-1 and other SG-1 derived media. Jackson is the only Stargate character to appear in all of the films and series in the franchise ; the main character Jack O'Neill did not appear in the 2008 film The Ark of Truth. 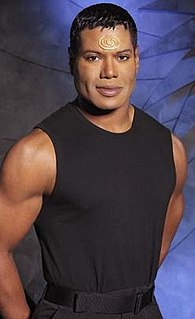 CMSgtTeal'c of Chulak is a fictional character in the military science fiction television series Stargate SG-1. Portrayed by Christopher Judge, Teal'c is a Jaffa warrior from the planet Chulak. As a Jaffa, Teal'c is a genetically modified human with an abdominal pouch that serves as an incubator for a larval Goa'uld. The larval symbiote grants enhanced strength, health, healing, and longevity; Teal'c is around 100 years old during the show's run and ages an additional 50 years in the final SG-1 episode. Teal'c's most notable feature is a golden tattoo found on his forehead, a sign that he once served the System Lord Apophis as First Prime, the most senior Jaffa rank.

"Children of the Gods " is the first episode of the military science fiction television series Stargate SG-1. It was written by producers Jonathan Glassner and Brad Wright. The pilot was directed by Mario Azzopardi.

The Ori are fictional characters in the science fiction television series Stargate SG-1. They are a group of "ascended" beings who use their advanced technology and knowledge of the universe to attempt to trick non-ascended humans into worshipping them as gods.

"Lost City" is the two-part finale to the seventh season of the science fiction television show Stargate SG-1. It was originally intended to be a second Stargate film, and was then to be the show's absolute finale, and finally ended up being the seventh season finale after the series was renewed. "Lost City" served as an introduction to Stargate Atlantis and the events portrayed were followed up in the Atlantis premiere "Rising" as well as in SG-1's own "New Order". "Lost City" also featured special guest star Chief of Staff of the Air Force John P. Jumper as himself. This episode was nominated for an Emmy Award in the category Outstanding Special Visual Effects for a Series and for a Gemini Award in the category Best Visual Effects.

The mythology of the Stargate franchise is the historical backstory of the series' premise.

"Reckoning" is a two-part episode from Season 8 of the science fiction television series Stargate SG-1. It resolves the long-running story arcs of the Goa'uld, the Replicators, and the Jaffa Rebellion, and are regarded as two of the most popular episodes of the series. This episode was nominated for an Emmy Award in the category "Outstanding Special Visual Effects for a Series" and a Leo Award in the category "Best Visual Effects".)

"Avalon" are the Season 9 premiere episodes of the science fiction television series Stargate SG-1. They marked the beginning of a "new" Stargate SG-1 that continued after the total closure and possible ending of the previous season. Despite seeing the departure of Richard Dean Anderson's Jack O'Neill, it sees the introduction of Ben Browder as Lt. Colonel Cameron Mitchell, Beau Bridges as Major General Hank Landry, and Lexa Doig as Dr. Carolyn Lam. They also bring in Claudia Black's character Vala Mal Doran as a recurring character, later to become a regular in Season 10, and introduce entire new storylines including further information about the Ancients, their links to Arthurian legends, and their origins.

"New Order" is the two-part Season 8 premiere of the science-fiction series Stargate SG-1. The episode earned a 2.4 Nielsen rating, a new record high for the show during its run on cable, which has since been tied, but never beaten. It also became the most-watched regular series episode ever for the Sci Fi Channel and the highest rated episode in the history of Stargate SG-1, drawing 3.22 million viewers. Part 2 was nominated for a Gemini Award in the category "Best Visual Effects".)

The two-part episode "Redemption" is the Season 6 premiere of the science fiction television series Stargate SG-1. Airing on June 7 and June 14, 2002, it was the first all-new SG-1 episode to be broadcast by SCI FI, the new home of SG-1 after the series' move from Showtime. The episode was written by producer Robert C. Cooper, and directed by Martin Wood. "Redemption" is the first episode where actor Corin Nemec had main cast status, his character Jonas Quinn replacing Daniel Jackson who died at the end of season 5. The episode also marks the second appearance of David Hewlett's character Rodney McKay, who later became a main character on Stargate Atlantis. "Redemption Part 2" was nominated for a Gemini Award in the category "Best Visual Effects".

"Lockdown" is the third episode for season eight of the Canadian-American military science fiction television series Stargate SG-1. The episode was written by Joseph Mallozzi and Paul Mullie, and directed by Will Waring. This was the only episode in the eighth season to receive a syndication rating, but was also one of the lowest rated of the season on the Nielsen household ratings. The episode got strong reviews from major media publishers worldwide.

"Full Circle" is the season finale for season six of the Canadian-American military science fiction television series Stargate SG-1. It was originally intended to be the last episode of Stargate SG-1. The episode was written by executive producer Robert C. Cooper and directed by Martin Wood. The episodes received an average Nielsen household rating and a low syndication rating compared to other season six episodes. The episode got strong reviews from major media publishers worldwide.

"Nemesis" is the last episode from season 3 of the science fiction television series Stargate SG-1. Written by Robert C. Cooper and directed by Martin Wood, the episode first aired in the United Kingdom on Sky One on February 11, 2000, and had its American premiere on Showtime on March 8, 2000. The episode sets up the Replicators as a new major enemy, ending in a cliffhanger that is resumed in the season 4 premiere "Small Victories".

Stargate: The Ark of Truth is a 2008 Canadian-American, military science fiction, direct-to-video film in the Stargate franchise, acting as a sequel to the television series Stargate SG-1. It is written and directed by Robert C. Cooper, produced by Cooper, John G. Lenic, and the series' creator Brad Wright, and stars its regular cast. The film is the conclusion of the Ori arc, and picks up after the SG-1 series finale. However, it happens before the Stargate Atlantis third season finale.