Threatmantics are a Welsh band from Cardiff, Wales. The band's current members are Heddwyn Davies (vocals, viola), Andrew Lewis (guitar), Gareth Middleton (bass) and Huw Alun Davies (drums). Their first album Upbeat Love was recorded whilst the band was still a three-piece (Heddwyn, Ceri & Huw) and was released by Domino Records' subsidiary label Double Six Records on 3 November 2008. Stereogum named Threatmantics a Band To Watch on 13 November 2008. [1] The band's long-awaited second album, Kid McCoy, was released in late 2012. The singles from it got heavy airplay on BBC Radio Wales and BBC Radio Cymru and were also played on BBC Radio 6 Music. DJ Adam Walton included "Esgryn" on his "Best of 2012" list. [2] 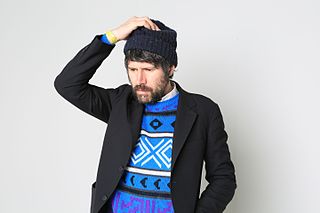 Gruffudd Maredudd Bowen Rhys is a Welsh musician, composer, producer, filmmaker and author. He performs solo and with several bands, including Super Furry Animals who obtained mainstream success in the 1990s. He formed the electro-pop outfit Neon Neon with Boom Bip. Their album Stainless Style was nominated for the 2008 Nationwide Mercury Prize. He won the 2011 Welsh Music Prize for his album Hotel Shampoo, which was followed up by American Interior in 2014, accompanied by a film, a book and a mobile app. His most recent albums Babelsberg and Pang were released in 2018 and 2019, respectively. He is considered a figurehead of the era known as Cool Cymru.

Guto Dafydd Pryce is a musician best known as bass guitar player and songwriter in the band Super Furry Animals.

The Welsh Language Society is a direct action pressure group in Wales campaigning for the right of Welsh people to use the Welsh language in every aspect of their lives. The current Chairperson of Cymdeithas yr Iaith Gymraeg is Mabli Siriol.

Wales has a strong and distinctive link with music. Singing is a significant part of Welsh national identity, and the country is traditionally referred to as "the land of song". This is a modern stereotype based on 19th century conceptions of Nonconformist choral music and 20th century male voice choirs, Eisteddfodau and arena singing, such as sporting events, but Wales has a history of music that has been used as a primary form of communication.

Eve Myles is a Welsh actress from Merthyr Tydfil. She graduated from the Royal Welsh College of Music & Drama in 2000. Later that year, she began portraying Ceri Lewis in the BBC drama series Belonging, a role she would play until the end of the series in 2009. Myles' early UK-wide television credits included the 2001 miniseries Tales from Pleasure Beach and the 2003 television drama Colditz. 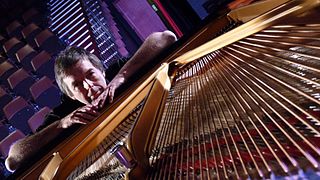 Los Campesinos! are a seven-piece indie pop band from Cardiff, Wales, formed in early 2006 at Cardiff University. Though the band formed in Wales, none of the members are Welsh. The band has gone through several lineup changes during their career, with their current lineup consisting of Gareth David, Neil Beale (guitar), Tom Bromley (guitar), Rob Taylor, Kim David, Matt Fidler (bass) and Jason Adelinia (drums); the members replace their surnames with "Campesinos" as stage names. David, Beale and Bromley are the only remaining original members still in the band. 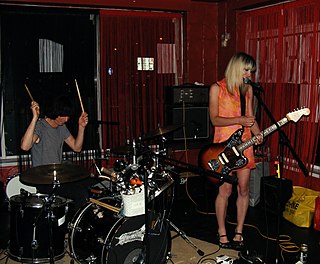 The Lovely Eggs are a two-piece lo-fi psychedelic punk rock band from Lancaster, England. They consist of married couple Holly Ross and David Blackwell. Ross was formerly the lead singer and guitarist in the all-female band Angelica.

Yr Anhrefn, also known simply as Anhrefn, were an influential Welsh punk rock group of the 1980s and 1990s.

Gareth 'Gai' J Thomas 'Toms' is a Welsh singer-songwriter, musician, producer and actor. In 1992 he co-formed the popular Welsh ska-rock band Anweledig, which developed into one of Wales' top live party bands. From 1997 to 2007 he created an 'off the road' Welsh folk outfit Mim Twm Llai, releasing three albums on Recordiau Sain. Since 2008, he dropped the Mim Twm Llai pseudonym for his own lifelong nickname Gai Toms, performing solo on guitar or with his backing band. His latest album titled 'Orig', based on the life of Welsh wrestling legend Orig Williams, gave us Gai Toms a'r Banditos.

Recorded at Dartington College of Arts in July 2010, Canu Rhydd is the fifth studio album by Welsh folk group Fernhill. It was released on 1 May 2011 on disgyfrith Records. Described by Huw Stephens on BBC Radio 1 as "another wonderful Fernhill album", and by Verity Sharp on BBC Radio 3's Late Junction as "a very beautiful album", Canu Rhydd is the first of the groups' albums to feature Christine Cooper on fiddle and spoken word. She joins the existing line-up of Julie Murphy, Ceri Rhys Matthews, and Tomos Williams, all of whom appeared on the band's previous, live album, Na Prádle.

Trwbador were a Welsh duo who occupied a place in the musical landscape between folk and techno. The two-piece resided in Carmarthenshire, although they began working together while at University in Newport. Trwbador's original sound has established them as a forerunner of the Welsh music scene.

Huw Evans, also known as H. Hawkline, is a Welsh singer-songwriter and radio and television presenter based in Cardiff. He also lived and worked in Los Angeles for several years. He performs in both English and Welsh.