BBC Radio Cymru is a Welsh language radio station owned and operated by BBC Cymru Wales, a division of the BBC. It broadcasts on two stations across Wales on FM, DAB, digital TV and online.

BBC Radio Cymru began broadcasting on the morning of Monday 3 January 1977 - its first programme was an extended news bulletin presented at 6:45am by Gwyn Llewellyn and Geraint Jones. This was followed at 7am by the first edition of the breakfast magazine show Helo Bobol!, presented by Hywel Gwynfryn with contributions from a network of local reporters in studios across Wales. The first record played on Radio Cymru was Ffrindiau Bore Oes by Hergest.

The station was the first broadcasting outlet dedicated wholly to programmes in Welsh, allowing much more airtime for such output than had previously been available on the old Radio 4 Wales (or its predecessors the Welsh Home Service and, before that, the BBC Welsh Regional Programme).

Initially, the service was part-time and restricted to breakfast shows, extended news bulletins at breakfast, lunchtime & early evening and a number of off-peak opt-outs from a sustaining Radio 4 Wales feed.

In November 1979, Radio Cymru's programming was expanded to 65 hours a week, introducing mid-morning output on weekdays, along with a growing line-up of dramas, light entertainment and documentaries. The network continued to expand over the next two decades before achieving a continuous service of up to 20 hours a day.

Later developments in the 21st century saw Radio Cymru introducing a nightly youth strand, C2, and regional opt-outs for South West Wales, which were axed in 2008 but later reintroduced to provide live commentary of Swansea City A.F.C. matches. The station has also been streaming online since January 2005. [1]

Over the years, it has done much to promote the language, with its sports commentators coining new terms which later became accepted by Welsh linguists. One of its more unusual –and longest-running –programmes is Y Talwrn, a poetry competition in which teams must come up with poetry in specific styles on specific topics.

The main Radio Cymru network broadcasts for 18+1⁄2 hours a day from 5:30am to midnight with overnight programming simulcast from the BBC World Service after closedown.

Radio Cymru's headquarters are based at the New Broadcasting House at Central Square in Cardiff city centre, but programming is also produced and broadcast from a network of regional studios in Bangor, Aberystwyth and Carmarthen.

Six months after the station closed, BBC Cymru announced it would launch a permanent second station, Radio Cymru 2. The new service airs every morning on digital and online platforms, as a music and entertainment alternative to the main network, which airs the breakfast news programme, Dros Frecwast. [5]

BBC Radio Cymru 2 began broadcasting at 6.30am on 29 January 2018. [6] It airs as an opt-out service from 7-9am on Mondays - Saturdays and from 7-10am on Sundays. The daily breakfast show broadcasts from Cardiff (Monday–Saturday) and Bangor (Sundays) with short news bulletins on weekdays from Aberystwyth.

BBC Radio Cymru is broadcast across Wales FM and DAB. It is also available on Freeview in Wales, throughout the UK on Freesat, Sky, Virgin Media and internationally online on BBC Sounds. As Radio Cymru was created from an opt-out of BBC Radio 4, it inherited the FM transmitters previously used by Radio 4 across Wales. At the time of the station's launch, it was the only radio service in the UK broadcasting solely on FM.

BBC Radio Cymru 2 is broadcast across Wales on DAB. It is also available on Freeview in Wales, throughout the UK on Freesat, Sky, Virgin Media and internationally online. 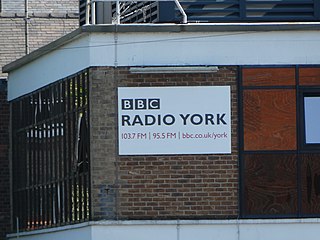 BBC Radio Wiltshire is the BBC's local radio station serving the county of Wiltshire. It broadcasts on FM, DAB, digital TV and via BBC Sounds from studios at Prospect Place in Swindon.

Capital Cymru is a local Welsh-language radio station owned and operated by Global. The station broadcasts to Gwynedd and Anglesey from studios in Gwersyllt, Wrexham via the Arfon transmitting station.